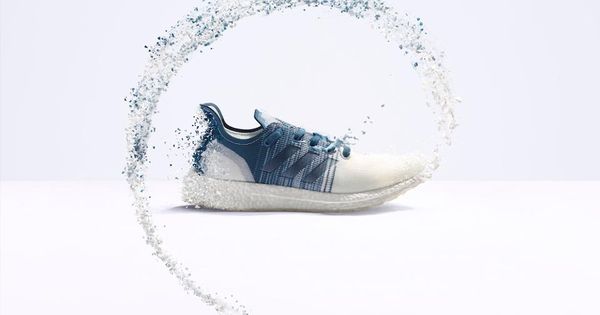 One of the most groundbreaking product launches in recent history has been the adidas Futurecraft.Loop sneaker which was the world’s first fully recyclable circular economy sneaker.

Futurecraft.Loop Gen 1 launched in April 2019 to 200 creator beta testers from across the globe, who returned the shoes in May to adidas to start the recycling process (Disclosure: I was lucky enough to get one of those pairs). adidas then recycled those shoes and remade the material into components for the next shoe, which is being sent back to the same 200 Creators within their beta program to continue the testing.

Gen 2 is a 100% recyclable performance running shoe composed of both virgin TPU and components made entirely with recycled material from Gen 1. It has a faded blue upper, as adidas is introducing colour for the next stage of the exploration, to see how the material evolves during the recycling process. Gen 2 is very much a milestone and proof of concept achievement in the experimental phase, as the brand continues to learn about recycling footwear. I caught up with the team behind the project to find out more about their journey.

I began by asking them why they were so passionate about the idea. David Quass, Director of Business Model Strategy said “I’ve been at adidas for a while and love the brand. Imagining the “Badge of Sport” decaying on landfill doesn’t sit well with me. As consumers we all enjoy buying stuff, yet some of the consequences of consumption on the planet are devastating.”

I knew there must be another way, so I was eager to be part of the team that took on the challenge of ending plastic waste.” Amanda Verbeck, Footwear Developer, Special Projects agreed. “I love creating sports products, but when we can create with intent, my motivation and energy skyrocket! The ambition for FUTURECRAFT.LOOP is to create products that don’t have to end up in landfill after they have been used. The one-material shoe is designed so that it remains a valuable resource to create another shoe.”

Some of the team had very personal motivations for wanting to be involved. Dharan Kirupanantham, Senior Manager, Future Technology Innovation said “A few years ago I visited my dad’s hometown in the north of Sri Lanka and was sobered by the amount of plastic that washes up on their shores each and every day; shoes amongst the mess. When I asked my dad what could be done, he was resigned to the reality that even if they cleaned up every day, the plastic would return by the morning. It’s easy to understand how people give up hope. What I like so much about FUTURECRAFT.LOOP is that it represents a start. We might not have all the answers, but it’s about making a start to address problems that touch so many people around the world.”

The project involved a multi-disciplinary approach between designers, material scientists and strategists. Paul Smith, Senior Director of Footwear Innovation said, “My team has driven the R&D efforts across Design, Sport Science, Engineering and Technology Innovation to bring the concept of FUTURECRAFT.LOOP to life. We will continue the R&D workstreams to pursue our goal of ending plastic waste. FUTURECRAFT.LOOP is something that is much bigger than just another product launch. It has the potential to change the way our industry addresses the problem of plastic waste, and it can also create a path for others to follow.” Verbeck joked “Our team all have two things in common – a passion and commitment to the project, and the ability to work completely out of our comfort zone!”

Tanyaradzwa Sahanga, Technology Innovation Manager agrees. “The first thing we realised though, was that job descriptions were redundant – there was no precedent for many of the challenges we faced, so working in isolation and coming together every so often was not the way forward. This is about mindset. And it’s about pushing boundaries. We are acting as explorers or pioneers – we’re trying something new. For this type of work, you need the mindset of: we’re going to learn and we’re going to take what we learn and apply that into a setting where the ultimate goal is that it becomes a commercial reality.”

The team all hope that their work will inspire other brands to take action to find their own path. “We talk about circularity, but we are only at the beginning. Each initiative helps bring us a little closer to the ultimate goal. Brands can use their influence to set the tone, and partners can help turn our ambitions into reality. I believe that end of use should not mean end of life for a product – but how can we ensure this? The journey we’re on is a paradigm shift and it’s not easy,” said Verbeck.

Kirupananatham agrees. “There is no silver bullet for sustainability; rather we need to be aware of where each and every one of us can step forward and contribute to a shared vision. This could be anything from reducing the number of materials used in a product or lobbying governmental institutions to implement more progressive laws on waste disposal and management. Most of all, I hope we are able give future generations of designers and brand leaders the means and inspiration to carry on the sustainability charge.”

Quass has the final word. “5 years ago, the ocean plastic threat didn’t have the same levels of mainstream exposure. Back then, adidas took a stand and engaged with Parley for Oceans. Today, ending plastic pollution in our oceans and landfills is a major focus for the media and society at large. I’m looking forward to what lies ahead on this journey to circularity.”

In defense of slugs: Show a little love