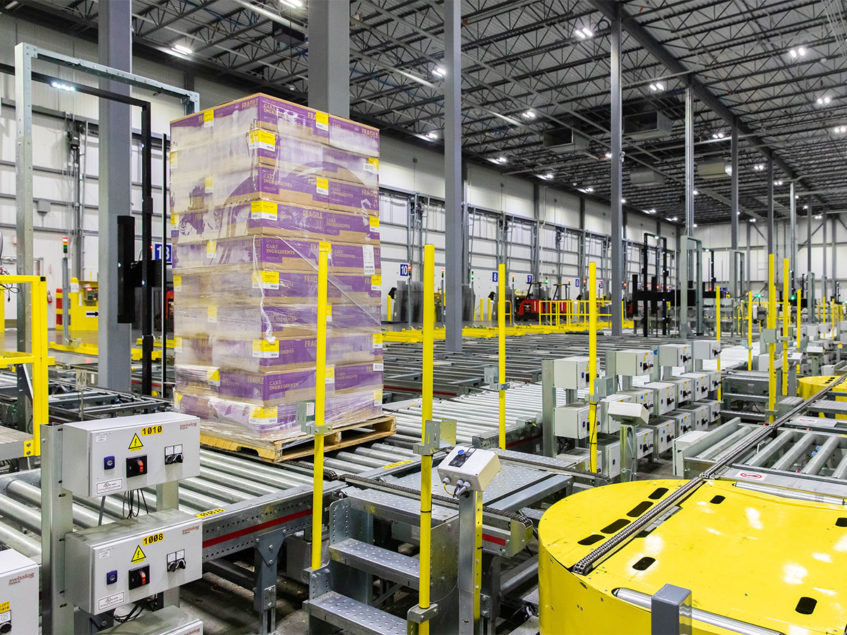 Leaders at Lineage Logistics have long understood that automated warehousing is the wave of the future, and this year they made good on their promise to advance that goal with a fully automated expansion to the company’s Sunnyvale, Texas, cold storage facility—the first fully automated freezer facility in the third-party logistics service provider’s (3PL) North American network.

Designed to serve grocery retailers and restaurants in Texas and the surrounding states, the addition—which has an operating temperature of -20 degrees Fahrenheit—opened in January and was expected to be running at 100% capacity by this fall. The project was driven largely by changing business demands among Lineage’s retail customer base—specifically demand for processing e-commerce orders and for faster service overall.

“This is kind of a wave of the future,” Sudarsan Thattai, Lineage Logistics’ chief information officer, says of the project, which took 18 months to complete and is connected to the company’s existing 300,000-square-foot traditional manual warehouse in Sunnyvale. “This is where we see the world going.”

The project is already bearing fruit by improving turn times in the warehouse, reducing the amount of time it takes to load trucks, and minimizing the need for employees to work in the harsh freezer environment—a big plus when it comes to worker health and safety and employee recruitment and retention.

Lineage says it started to see shifts in its retail customers’ requirements over the last few years—particularly their desire to reduce inventory carrying costs and speed delivery to the end-consumer. That meant increased inventory turns and faster throughput in the warehouse, a goal best achieved by automation.

Notably, the Sunnyvale addition also had to be designed as a multi-tenant operation, not as a project for a dedicated client, which is more typical of automation projects, Thattai explains. In this case, Lineage wanted to create a facility that could serve a variety of retail customers with the flexibility to accommodate new clients and adapt to other changes that might occur. Essentially, it needed a retail-centric environment that would allow Lineage to serve customers who are looking to get grocery store or restaurant-ready products into their own omnichannel fulfillment networks quickly. These kinds of products typically turn every three weeks, Thattai explains.

“[The project is] built for speed and built for a profile where we can have customers there for three to five years, but [also] serve a wide range of customers,” Thattai says.

To make it happen, Lineage turned to material handling automation specialist Swisslog. The companies worked closely to integrate Swisslog’s PowerStore automated storage and retrieval system (AS/RS) with Lineage’s own warehouse management software (WMS) and proprietary control system for put-away and picking. Flexibility is the hallmark of the system. As Grant Beringer, vice president of consumer goods for Swisslog, explains, PowerStore can be reconfigured to serve different customer needs almost at the flick of a switch.

“They don’t necessarily know which types of clients they will have [at this facility] in the future, so they needed a solution that was flexible enough for a range of products and customers,” Beringer says. “We can actually change the depth of storage locations as the product range changes with customers, a function we call ‘flexible row depth.’ [We clear] out the pallets in there from a previous client, and then it’s simply a software configuration change to modify the storage depth for that location.”

Technology integration has been a game-changer as well, according to Thattai. The addition uses a digital yard management system that integrates with Lineage’s own mobile driver app for asset tracking and to support the short turn times.

The Sunnyvale expansion—a 96,000-square-foot, 100-foot-tall rack-supported warehouse—was designed for speed and efficiency. It was also designed for maximum density, with the ability to store up to 24,000 pallets despite its small footprint. At the outset of the project, target throughput rates were 367 pallets an hour with turn times—meaning the time it takes for a pallet to be released from the system and arrive in the “ready” lane to be loaded onto a truck—of 12 minutes or less, according to Lineage.

The PowerStore AS/RS is at the center of the project; it features a compact, high-density pallet shuttle system that not only speeds put-away and picking, but also minimizes worker exposure to harsh conditions in the freezer environment.

“Robotics take over, so we only need people on the docks,” Thattai explains, adding that the freezer is not the most fun, or the most popular, place to work in a storage facility. “This is our investment in making sure we are doing the best we can to keep our team members out of harsh conditions.”

The PowerStore system in Sunnyvale is the largest ever deployed in a cold storage facility, according to Swisslog, and the first of its kind in a deep-freeze environment. Its configuration takes full advantage of the building’s height, with three storage modules that contain nine levels each with 65 rows per level. Vertical lifts in the modules move the pallets up to the destination level. A PowerStore carrier then transports the pallet along the aisle to the destination row, where a second vehicle, called a row carrier, deposits the pallet in the storage row; the row can be configured for any depth between one and 20 pallets deep. The system is tailored to the freezer environment with low-viscosity lubricants and heated controls, and uses capacitors instead of batteries to power the shuttles.

Lineage was well ahead of its stated goals for the project by early September, typically seeing turn times of between nine and 12 minutes in the warehouse. Thattai says he expects turn times to improve even more as workers gain experience with the system. The quicker turns allow Lineage employees to load trucks even faster—typically about 50% faster than in the company’s traditional warehouse, where loading time is about two hours, Thattai says.

“All things being equal, I can load a truck in 45 minutes,” he says.

Beringer says he expects demand for such systems to grow, especially with a labor shortage that has been exacerbated by the Covid-19 pandemic. A desire to reduce human interaction in warehouses around the world has only accelerated the trend toward automation, he adds.

“We’ve already seen an increase in automation due to labor availability [challenges], particularly in cold storage facilities like this one,” he says. “We think there is going to be more and more of a need for this.”

Thattai agrees, emphasizing demand for speed as well as the ability to meet shifting labor requirements.

“We see this as here to stay,” he says, noting that Lineage is still assessing “lessons learned” from this project to apply to future projects. “Not 100% of our new buildings will be automated, but a significant portion will be. And portions of our automation [projects] will adopt this design. It’s truly built for speed.”

10 Predictions for Supply-Chain and Procurement Software in 2021