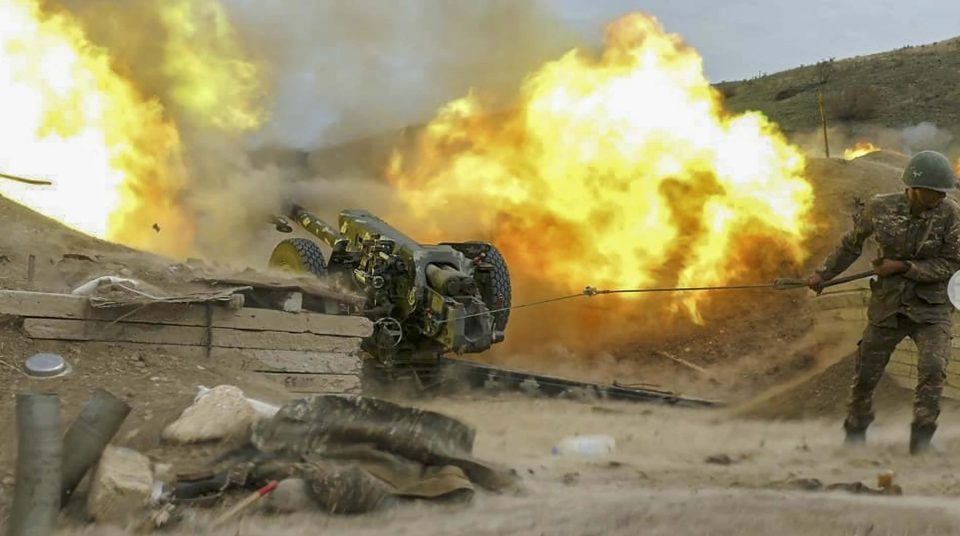 After days of intense fighting over Nagorno Karabakh, a new diplomatic initiative was launched on Thursday, demanding an “immediate cessation of hostilities” and calling on all parties to the conflict to “immediately commit themselves to resume negotiations on the substance of the settlement in good faith and without preconditions.”

That demand, articulated in coordinated joint statement by the presidents of France, Russia and the United States, would ordinarily be seen as an impressive display of rare diplomatic agreement between the West and Russia. But there is nothing ordinary about either the Karabakh conflict or this week of fighting.

Nevertheless, there is a glimmer of hope that this latest diplomatic initiative will have an impact, for three main reasons.

The Imperative to Cease Firing

First, as serious attacks by Azerbaijan have now expanded well beyond Nagorno-Karabakh and into Armenia proper, the days since Azerbaijan’s sudden offensive have only reaffirmed the urgent imperative for a ceasefire agreement, or at the very least an agreement to cease firing. Such an imperative is not a result of a sudden change of heart by Azerbaijan to halt its military attacks, however.

Rather, the military situation on the ground has changes considerably since the opening stage of the Azeri offensive. Faced with the inherent challenges to overcome the well-entrenched and fortified positions of the Karabakh Armenian forces, Azeri losses in both men and equipment have mounted in each day of its repeated attacks. Although Azerbaijan has imposed strict censorship, making any accurate estimate of their military casualties extremely difficult, the loss of important equipment has been significant.

For example, the downing of over 80 military-grade drones or UAVs and another 7 combat helicopters, as well as the destruction of more than 175 tanks and armoured personnel carriers, for example, represent a substantial setback to Azerbaijan’s capacity for sustained combat operations.

While Karabakh losses have also been serious, especially given the official report of over 85 military fatalities and another more than 100 wounded, the destruction of their equipment has been comparably lower than that of the Azeri forces. This discrepancy is at least partly a result of the military advantage of terrain and topography for the defenders, in contrast to a heavier burden on any attacking force to counter entrenched positions.

The Turning Point in Combat Operations

Thus, the military context of heavy losses and difficulty to maintain the momentum of offensive combat operations marks a turning point in the fighting and should help to encourage the Azeri side to at least consider agreeing to a ceasefire.  This is also evident by the fact that this week of fighting has already surpassed earlier attacks, such as in April 2016, in both duration and intensity.  Such a turning point in the battles is also seen in the change in tactics by the Azeri forces, moving away from sweeping assaults by armoured units and infantry units to a more desperate series of attacks by UAVs and backed by the use of rockets launchers and artillery fire. And this turning point has also included an expansion of the battlespace into Armenia proper, with the downing of an Armenian combat fighter jet, reportedly by a Turkish F-16, and with the penetration of combat UAVs well into Armenian airspace near the Armenian capital Yerevan itself.

A Way to “Save Face”

A second important factor suggesting the possibility of a ceasefire stems from a chance for the Azerbaijani leadership to agree to cease its attacks in order to regroup and consolidate its territorial gains. This would allow Azeri forces to better secure the one or two positions that it seized in the fighting, thereby offering an opportunity to strengthen a slightly altered “line of contact” or “front line” between Azerbaijan and Karabakh.

Such a scenario would also grant the Azeri leaders a “face-saving” way to stop and declare “victory.” And given the political risk from dangerously high expectations among the Azeri population, this opportunity may be too tempting to miss, as the risk of serious setbacks from Karabakh counter-attacks will only increase if fighting continues. This latter risk is due to the already strained logistical and supply chains for the attacking Azeri units.

The Pressure of Diplomatic Determination

But it is the forceful impact of coordinated diplomacy and combined determination by France, Russia and the United States that constitutes a third factor that may very well force Azerbaijan to assent to a ceasefire. The impact of this rare allied effort of Russia and the West will not only pressure Azerbaijan, but perhaps more crucially, effectively isolate Turkey. And just as Turkey has done much to contribute to the over-confidence and aggressive posture of the Azeri armed forces and leaders, any lessening of Turkish military support and direct assistance will seriously impact military morale and impede Azerbaijan’s willingness to keep fighting.

Yet while this tri-partite diplomacy by France, Russia and the United States offer a critical new opportunity for halting this war and brokering a restored ceasefire, such a diplomatic “success” is only the beginning and an achievement that accomplished the bare minimum of stopping the fighting. Such a possible diplomatic, therefore, as pressing and urgent as it may be, does little to address the underlying causes for Azerbaijan’s attack in the first place.

From this perspective, this only offers a temporary respite and a renewed time for the application of a more robust and rapid policy of diplomatic engagement toward the Nagorno Karabakh conflict. And for such engagement to work, the diplomatic framework must include and involve all parties to the conflict, including most notably, the democratically elected representatives of Karabakh (or “Artsakh”) themselves, especially as the peace process and diplomatic mediation is centered most critically on their future first and foremost. Otherwise, if such a more inclusive approach is not attempted, yet another renewed military attack by Azerbaijan is certain to repeat in the coming year if not in the coming months.

7 looming questions about the rollout of a Covid-19 vaccine

Coronavirus: Leicester local lockdown a reminder that risk is not gone