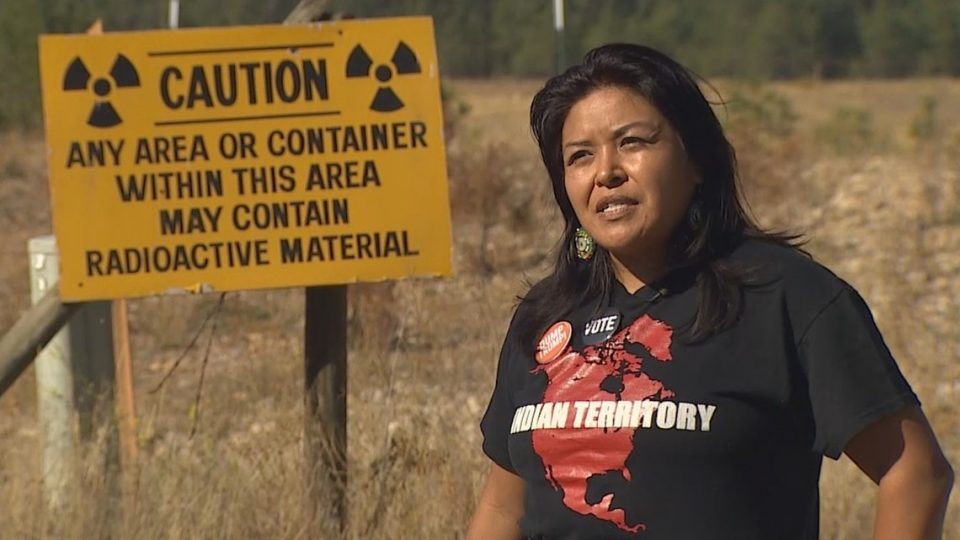 The Spokane Tribe is fighting to clean up the toxic remnants of a Cold War uranium mine. They aren’t just battling pollution but environmental racism too.

WELLPINIT, Wash. — The home of the Spokane Tribe is tucked in the Selkirk Mountains northwest of Spokane. The tribe has lived on the land since the reservation was established in 1881 and has been in the area long before.

But those forests are also home to something else: rich deposits of uranium. In the atomic sprint of the Cold War as Hanford processed uranium, much of the raw material came from the Midnite Mine.

When it closed in 1981, it left a massive pit and a slew of environmental problems, including toxins leaching into groundwater and spreading into the soil and the risk of human exposure to contaminants.

“There’s just a feeling; I get sick to my stomach,” said Spokane tribal member Twa-le Abrahamson-Swan.

Four decades later, Abrahamson-Swan is still working to get the reservation cleaned up. And her fight is not just against dangerous pollution but also a larger issue – environmental racism.

Environmental racism is a concept that denotes the disproportionate impact of environmental problems, like pollution, on Black, indigenous and people of color communities. It started being used in the United States between the 1970s and 1980s, according to Isabel Carrera Zamanillo, a diversity, equity and inclusion program specialist at the University of Washington’s College of Environment.

With the valuable natural resource of uranium on the reservation, the Spokane Tribe’s struggle is a textbook case of environmental racism.

In the 1800s when white settlers came west, they moved the tribe to the land.

“When allotments were being made, our people were pushed to the mountain areas, because at that time a lot of the farmlands were more desirable,” said Abrahamson-Swan.

But that lucrative uranium brought the government back, mining in what was supposed to be the tribe’s place.

The mine area’s now so contaminated it’s an Environmental Protection Agency (EPA) Superfund cleanup site. The federal agency sued the owners, Newmont Mining, to bring them back and clean it up.

“It’s contamination that you really can’t see or smell, so they could be going generations and generations drinking the water, breathing contaminated air and not know it,” said Abrahamson-Swan.

“And it’s a hard thing to explain to your community,” Abrahamson-Swan continued. “Like we’re not trying to discourage people away from our traditional lifestyle whatsoever, but our wildlife are impacted. Our fish are impacted.”

And people too. The tribe says there’s a cluster of rare health problems among their members. An EPA risk assessment found someone living off the land for 70 years had a theoretical one in five chance of developing cancer.

“In a series of meetings a couple of years ago, we had a span of about three months, and we lost 10 tribal members to cancer during that time,” said Abrahamson-Swan. “And it was an eye opener.”

The impacts of environmental racism reach beyond the Spokane Tribe.

A 2015 paper in the journal “Geosciences” notes, “The legacy of uranium procurement has left a legacy of long-lived health effects for many Native Americans and Alaska Natives in the United States.”

It’s been a major issue for the Navajo people as well with over 500 abandoned uranium mines on their land.

On the Spokane Indian Reservation at Blue Creek, tribal members worry about what’s happening from the laundry list of toxic chemicals found in the water, air and soil.

“One of the things that’s still an unknown is how do these chemicals work together in combination,” said Abrahamson-Swan. “What do all these as a mixture do to the human body? And it’s not studied.”

For Abrahamson-Swan, the fallout of environmental racism is extremely real and especially painful. Her mother, Deb Abrahamson, was diagnosed with glioma sarcoma cancer in 2016. The cancer is terminal.

“For me, it’s associated with that mine site,” said Abrahamson.

When asked what she thought was the core issue that allowed something like that to happen, Abrahamson said racism was one of the biggest.

“Because when our country was invaded, we were viewed as a dispensable population or subhuman,” Abrahamson said. “So, it was easy to be able to do the level of damage that has occurred on tribal lands, because the people are viewed as subhuman and have no rights and have no say in how we conduct our lives.”

Back at UW, Zamanillo said fighting environmental racism means we all should think about the impacts of the products we buy and consume, where materials are mined and how it’s shipped. But also, she said we must continually include impacted communities in the solutions.

“First thing we need to consider is what each community considers sacred, and what is their interest,” Zamanillo said. “It’s not just about solving the problems but also listening to this community and collaborating.”

That is what’s on Abrahamson-Swan’s mind.

“I think what we see are decisions made on behalf of the community are at the root of some of the problems,” Abrahamson-Swan said. “Because when you don’t have the impacted community in the room at all levels, these are the people that are going to have to live with this decision for our entire life.”

“The land is beautiful – there’s people all over. It looks so wonderful. Yet, when you look underneath, it’s a deadly, toxic slime that isn’t going to go away,” said Abrahamson. “And it’s stuck on our people.”

This story was produced as part of “Facing Race,” a KING 5 series that examines racism, social justice and racial inequality in the Pacific Northwest. Tune in to KING 5 on Sundays at 9:30 p.m. to watch live and catch up on our coverage here.

Food and Drink businesses: are you Brexit ready?

Global Backup Software Solutions Market 2020 | Know the Companies List Could Potentially Benefit or Loose out From the Impact...

Procurement, use of Covid-19 vaccine to depend on 5 aspects | Daily Express Online

Insights on the Hydraulic Cylinder Global Market to 2027