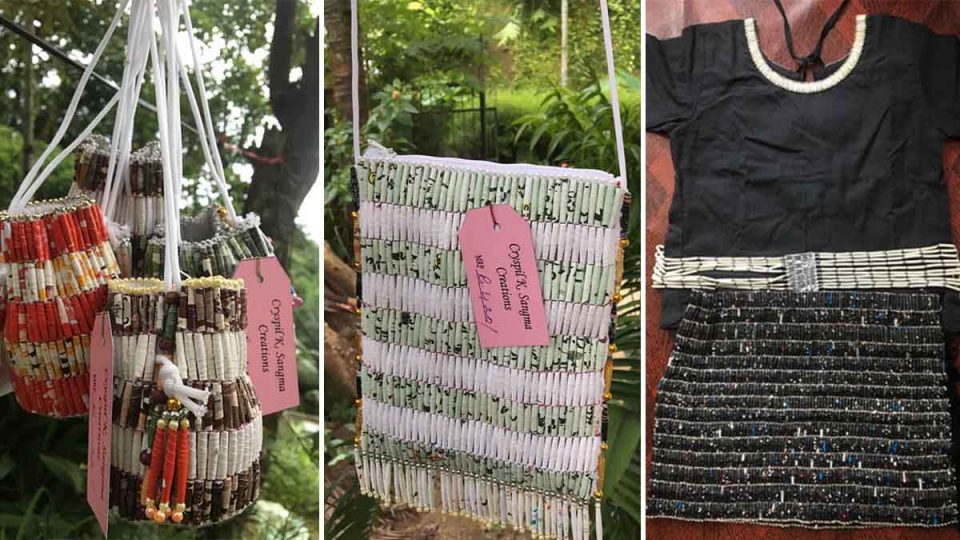 
New Delhi: Cryspil K. Sangma, a 72-year-old woman from the hilly town of Tura in the West Garo Hills district of Meghalaya, has been recycling waste material to make traditional accessories belonging to the state’s Garo tribe.

Sangma began her venture at the age of 50 with an aim to revive the rich culture of the A’chik (meaning ‘people of hills’ in Garo language). She started making sustainable clothes  such as the ‘Ganding-Chinding’ (traditional Garo attire), the ambeng top (traditional top wear) and lengti (bottom wear).

“It’s never too late to start something that you are passionate about because it always brings you joy and satisfaction in life,” she has been quoted as saying.

She later founded Cryspil’s Creations, an online store through which she sells her eco-friendly, handcrafted accessories and the other products she designs.

She also made the kadesil and kakam (Garo traditional attires) needed for the Wangala dance during the 2007 Independence Day celebrations in New Delhi.

“If you are in pursuit of your dreams and happiness but are having a tough time, don’t give up on your dreams,” Sangma said.

For her work, she has received several awards, including the Award of Excellence for Waste Management and Innovation in 2018 in Meghalaya and the 2019 top 25 start-up entrepreneurship award in the state.

Chandana Basu and Sabita Roy, two friends in Tripura who parted ways in 1981, were brought together again by the Tripura Ham Radio Club — the state’s first amateur radio station set up by police officer Biswajit Saha.

The two women grew up in the staff quarters for the Agartala airport personnel and attended the Bani Vidyapeeth School and later a women’s college in the city together. Basu’s father was, however, transferred to West Bengal in 1981 and the two were separated.

Basu, who now resides in West Bengal’s Barrackpore, recently got in touch with members of the Tripura Ham Radio Club and provided them with Roy’s Agartala address since she did not know her friend’s current location.

The club’s members then dug up information on who resided in the Agartala airport quarters around 1981 and was able to trace Roy to Udaipur, where she now lives with her family.

Around 250 people in 18 households of Samurou Awang Leikai (Yanglem), a town in Manipur’s Imphal West district, have allegedly been denied voting rights and benefits for the past 27 years.

The residents have claimed that they have not been registered in any electoral roll since 1993.

Over 50 households of Samurou stayed together before the 1976 delimitation. But after the 1995 review, the households that were moved from Wangoi constituency to Langthabal have not been registered in any electoral roll.

Saffron seeds or corms that were transported from Kashmir to Sikkim and planted around September-October are now flowering in Yangyang, a small town in the southern part of the Northeastern state.

The North East Centre For Technology Application and Reach (NECTAR), an autonomous body under the central government’s Department of Science & Technology, undertook a pilot project to explore the feasibility of growing saffron in Northeast India.

Tests were carried out to understand the soil and actual pH conditions of Yangyang by the botany and horticulture department of the Sikkim Central University. The department had found the land comparable to saffron growing places in Kashmir.

The NECTAR project will also focus on post-harvest management to improve saffron recovery and its production. Detailed analysis and testing of parameters such as soil, its quality and quantity are also being planned in other parts of the Northeast for extrapolation of the project.

Also read: Experts figure out mystery behind why 18 members of this Assam family are visually challenged

Cainiao: Japan has always been a key market for us

S.African regulator not planning to decide on nuclear procurement on Wednesday