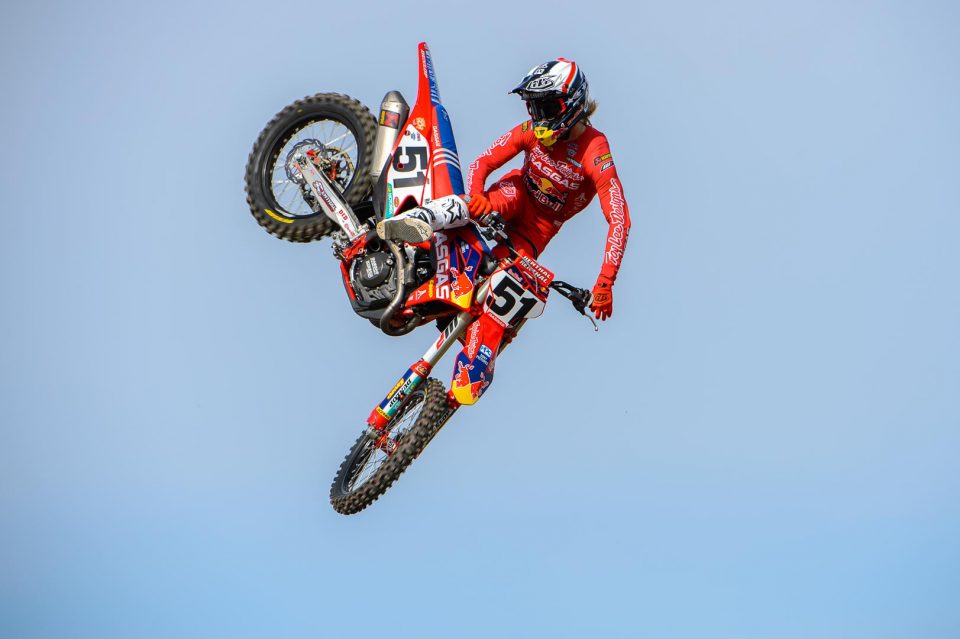 GasGas invited the press to a coming-out party for its new 2021 GasGas Factory Racing Teams—motocross/supercross, GNCC (Grand National Cross Country), and observed trials. Held at RD Field near the GasGas (and KTM headquarters in the United States), seven riders hit the supercross, endurocross, and trials practice course for photos.

Before riding, GasGas representatives, including GasGas North America Off-Road Race Team Manager Geoff Aaron and Costal GasGas Factory Racing Team Manager Barry Hawk, discussed the racing and the focus of the brand. Recently acquired by the KTM Group, GasGas is being marketed as a “fun” brand. With KTM as the “serious” racers and the historic Husqvarna marque appealing to an older demographic, GasGas adds youthfulness to its promotional arsenal. GasGas was formed in 1985, while KTM dates back to 1953, and Husqvarna was started in 1689 (with the first motorcycles produced in 1903).

The GasGas EX off-road motorcycles and MC motocross/supercross models are based on KTM equivalent motorcycles. The trials bikes are still made in Spain and basically unchanged from those built by GasGas when owned by the Torrot Group. The GasGas Factory Racing Team riders were all aboard 2021 models.

Justin Barcia is the star of the show, as a multi-time Supercross and motocross race winner, and a two-time Monster Energy Supercross 250SX East champion. He’s the sole 450 rider for the Troy Lee Designs/Red Bull/GasGas Factory Racing Team. It is Troy Lee Designs’ first foray into the 450SX and 450MX divisions, and TLD’s first year with GasGas after previously running KTMs. Barcia will be racing the 2021 GasGas MC 450F.

Michael Mosiman and Pierce Brown will be campaigning the 2021 GasGas MC 250F in the 250 classes. Mosiman is moving to GasGas from the Rockstar Energy Husqvarna Factory Racing team. As both Husqvarnas and GasGas motorcrossers are based on a KTM platform, Mosiman should make the change seamlessly. Pierce Brown, who is injured and did not ride at the press event, rode for Troy Lee Designs/Red Bull/KTM last year, so he will have an even smoother transition to GasGas. Longtime TLD race manager Tyler Keefe also makes the move to GasGas.

The Coastal GasGas Factory Racing team will focus on GNCC success, while also competing in the National Enduro Championship and other prestigious off-road races in the United States. Ricky Russell will be aboard the 2021 GasGas EX 450F, and Johnny Girroir will campaign the EX 250F. Russell rode for the Coastal Racing Husqvarna last year, while Girroir rode a privateer KTM in 2020 and has an XC2 win under his belt. Eight-time GNCC champion Barry Hawk returns as a Coastal Racing Team Manager.

The GasGas Factory Racing team for the 2021 MotoTrials USA National Championship Series (the 2020 season was canceled) consists of Daniel Blanc-Gonnet in the Pro class and Madeleine Hoover in the Pro Women’s division. Blanc-Gonnet has been riding GasGas trials bikes since 2017 and finished the 2018 season in P2. Hoover has won the last three Women’s Pro National Championships. However, Hoover was unable to ride at the event due to injury. Ten-time US Trials Champion Geoff Aaron also carries the title of GasGas Trials Racing Team Manager. The riders will be aboard flagship GasGax TXT GP models.

GasGas emphasized that trials bikes are great cross-training motorcycles for riders of all disciplines, as well as fitting into the “fun” ethos that GasGas is promoting.

FlexQube adds to its dealer network

How will the pandemic reshape corporate travel? – Fortune