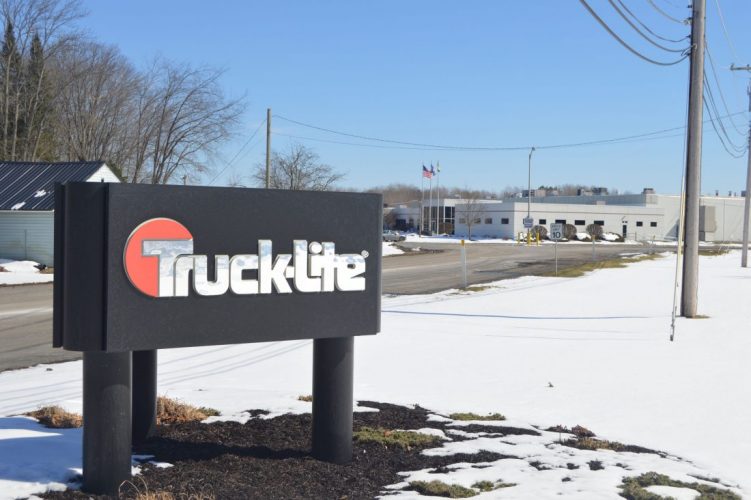 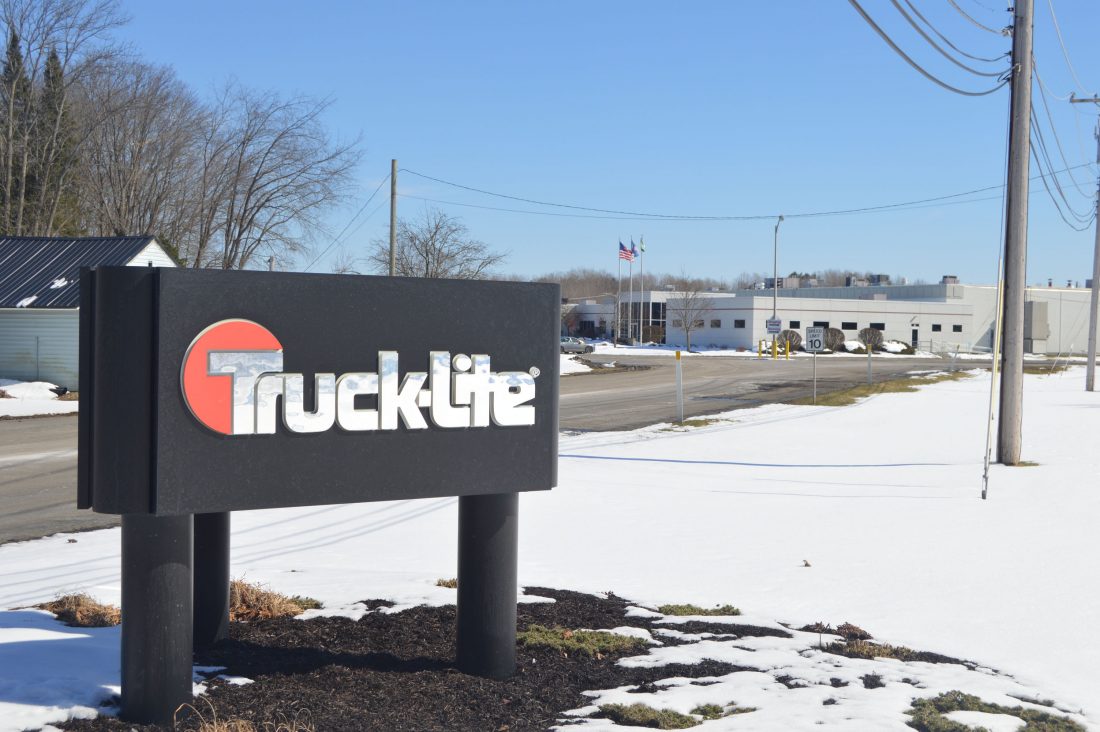 The most-read business story in our pages over the last year was one of its earliest when news broke that Truck-Lite had tentatively decided to cease production at its longtime Falconer manufacturing facility by the end of 2020.
P-J file photo by Eric Tichy

Editor’s Note: The Post-Journal is looking back at the top stories of 2020 and the way they will shape the coming year. Today, 20 for 2020 looks at business stories that were among the most-read stories in the newspaper this year.

For years, Chautauqua County has tried to pivot its economy to make better use of tourists and their disposable income.

COVID-19 changed all that.

A recent New York State Association of Counties report analyzes total taxable sales in Chautauqua County for June through August 2020 compared to the same period in 2019.

Other amusement and recreation industries lost 22.4% of their taxable sales. Wired and wireless communications decreased 12.8%.

The delivery of more and better therapeutics, and vaccines, will help facilitate this transition, but we could be well into 2021 before that process is completed and people feel comfortable returning to ‘normal’ activities,” a recent New York State Association of Counties report stated.

A region that has struggled to provide enough jobs to its residents in recent years lost even more of those jobs this year. The most recent state Labor Department statistics show Chautauqua County lost 4,800 jobs from November 2019 to November 2020, a 9.4% increase.

A smattering of the most-read business-related stories from the past year shows how that happens, as well as a peek into why small business owners make the difficult choice to go into business for themselves.

The most-read business story in our pages over the last year was one of its earliest when news broke that Truck-Lite had tentatively decided to cease production at its longtime Falconer manufacturing facility by the end of 2020.

“Truck-Lite has made the tentative decision to cease production at our Falconer manufacturing facility by the end of this year and relocate work to other Truck-Lite facilities,” a spokeswoman said in a statement to The Post-Journal. “Our tentative decision is consistent with other recent actions designed to meet customer demands and make Truck-Lite more cost competitive in the global marketplace. This is not a decision that we take lightly, and we are committed to treating the impacted employees fairly. This tentative decision has no impact on our other Falconer office-based employees. We intend to maintain a presence in the Falconer area.”

Truck-Lite is a manufacturer of heavy-duty and off road lighting.

The company would not state how many employees will be impacted by the facility’s closure. The corporate office, located next to the plant, handles accounting, customer service, purchasing and engineering, among other duties.

The 170,000-square-foot plant in Falconer was the largest for Truck-Lite in the U.S. The company has 10 facilities across North America and Europe.

In March 2019, Truck-Lite announced it was moving its headquarters from Falconer to Southfield, Mich. The move included the creation of 95 jobs through an agreement with the Michigan Economic Development Corp. in the form of a $850,000 performance-based grant.

Truck-Lite was founded by George D. Baldwin in 1955 in rented quarters in Jamestown. Ground was broken in 1966 at the Elmwood Avenue location in Falconer at an estimated cost of $800,000.

A property that has struggled to find a stable tenant since the W.T. Grant Department Store went out of business is once again vacant.

The process started in February when GPatti Enterprises filed eviction papers against Jamestown Brewing Company claiming the tenant owed $85,000 in base rent. The 115-121 W. Third St. brewery opened for business in July 2019, but briefly closed after a delay in receiving its state liquor license. The license was received in September 2019.

Jamestown Brewing Company permanently closed in July less than a year after welcoming its first customer.

Owner Jon McLellan II said the “difficult decision” to shutter the brewery and restaurant was made not long after he learned an application for federal Paycheck Protection Program funding had been denied.

McLellan said JBC was approved for an Economic Injury Disaster Loan, but only for about $98,000, and not nearly enough to get the young, cash-strapped brewery and restaurant back up and running. McLellan thanked those who supported JBC and the “great people” who assisted along the way, including all the employees.

“Hopefully learn from this accident and move on,” he said. “I don’t really regret anything, so to speak. There were a lot of great people.”

Cummins Inc. officials had been preparing for a general slowdown, but in April COVID-19 forced even more drastic cost-cutting. Company officials announced a cut in salaries at all levels of the workforce as the company weathers the COVID-19 pandemic.

Tom Linebarger, Cummins Inc. chairman and CEO, took a 50% pay cut while directors took a 25% pay cut. All other employees saw their pay reduced between 10% and 25% as well as a reduction in working hours.

Cummins officials knew 2020 was going to be a difficult financial year before COVID-19, but when the impact of COVID-19 became apparent Cummins began cutting hours and salaries. Linebarger told investor analysts in July that the company would meet its promise to employees to restore hours and wages by roughly October this year.

“We made a commitment to our employees that we would restore the compensation in the fourth quarter,” Linebarger said in July. “We think we’ve probably done as much of that as we can do on paying people lower salaries and also cutting their hours. So our view is that that part we’re going reverse. The variable comp, as you know, that just goes by how our earnings go. So if earnings are weak then variable comp will continue to be lower than planned. So that will continue to be a cost reduction over what our plan was. So part continues and part would not come back.”

Within a month of the COVID-19 shutdowns in New York state, local restaurants were feeling the pinch.

Both The Pub on North Main Street and Taco Hut on East Third Street in Jamestown have temporarily closed their doors after offering takeout options for diners previously.

“It is hard because that is our livelihood. We have owned the Taco Hut for 48 years,” Kim Mason said. “The safety for everyone is the most important thing right now. That is it, that is the bottom line. How bad would we feel if someone got sick, you know? Even one person would make us feel really bad.”

Mason estimated that the shutdown had caused a reduction in over 75% of the restaurant’s business, forcing staff cutbacks prior to closing.

The Pub co-owner Mary McCusker made the decision to close her doors last week, citing concerns for the families of workers.

“We just could not worry about it any longer so we said that’s it, we’re closing,” McCusker said. “We told all our customers on Monday a week ago that we were closing. They understood. Everybody has been great, our customers have been unbelievable. It would have been fine if we didn’t have to worry. It’s not worth taking the chance.”

The news wasn’t all bad, however.

For businesses that have kept their doors open for takeout orders, the continued support from local customers has been crucial.

“I just can’t believe the amount of support that has poured out for us,” said Michelle Koresko of Jeremy’s Belview on Foote Avenue. “I just can’t put it into words how thankful I am to still have a job and be able to support other people.”

The Ashville General Store has also been able to keep its doors open for takeout orders of pizza, sandwiches, salads and more.

“We have been open, we had to change our hours a little bit but we are open and we are thankful for that,” Jackie Francis said. “We have been busy at night, our daytime sales and foot traffic is a lot slower. But the night is great, and of course we have had fantastic customers and thankfully a lot of them are coming in to support the businesses that are open.”

Danny B’s Italian Food, located at 708 W. Third St., Jamestown, opened on Valentine’s Day, which is appropriate because the new business carries on a family tradition of love for homemade Italian dishes made from scratch.

The owner of Danny B’s is Cris Benevento, who is carrying on his family’s legacy that started when his father, Danny, and mother, Sandy, opened their own pizzeria in 1977.

“They were successful and provided for me and my two sisters,” he said. “They gave us a good life.”

Benevento has obviously included his father in his new business by naming the restaurant Danny B’s. He also included his late mother Sandy by using some of her recipes such as her secret meatballs and special red sauce, which can be order with spaghetti or made into a sandwich.

Benevento has also included his own dishes he learned at fine dining establishments he has been a chef at since 2000. One of those entrees includes a walleye sandwich, which is a filet of walleye, garlic aioli, provolone cheese, lettuce, tomato and onion.

“I wanted to bring my fine dining skills back to my roots of a pizzeria,” Benevento said. “We didn’t want to be like the other guys when we opened.”

Masks produced by slave labour in China on sale in Belgium