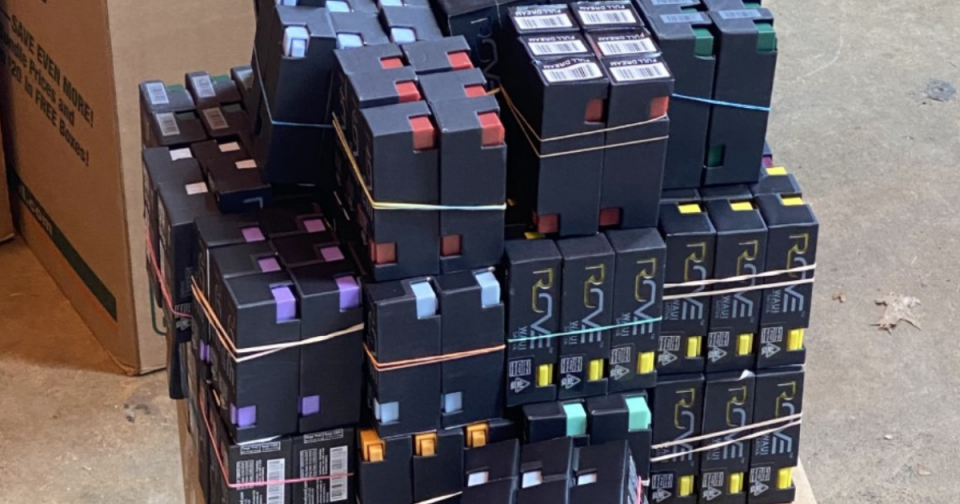 AKRON, Ohio — More than 20,000 cartridges containing THC were seized after search warrants were executed at multiple locations, according to Akron police.

Tetrahyrocannabinol is the main mind-altering ingredient found in marijuana.

The seizure of the cartridges was part of a lengthy investigation by federal, state, and local investigators that started in early 2019.

700 pounds of marijuana, 400 pounds of edibles, and 200 pounds of “marijuana dabs” were also seized, along with a large amount of cash and several guns, according to Akron Detective David Garro.

Police received a citizen’s complaint in 2019 that centered on Bubba Dubba’s Vape Shop on East Tallmadge Avenue. The business has since been renamed Dream Hemp Store.

“They called the narcotics unit and said, ‘Hey, these people are selling drugs. It looks like candy. They’re selling it to anybody that comes in,'” Garro said.

According to a federal criminal complaint, an investigation began to focus on Demarco L. Jones.

In August of 2020, Jones posted a video of himself flashing a large stack of money and a large bag of marijuana and claimed to have his “weed license,” the complaint alleges.

Garro referred to Jones as “a wholesaler” and said the suspect supplied the East Tallmadge business with illegal drugs.

“He was also manufacturing cereal containing THC, gummies containing THC. He was taking raw marijuana and distilling it, getting the wax out of it for liquid THC,” Garro said.

According to investigators, the investigation continued to grow and last week eight locations in Summit and Stark Counties were searched.

All told, more than a ton of marijuana products was confiscated. Garro believes it was the largest haul of its kind for Akron police.

“In fact, when we did the raids, the biggest problem we had was finding enough police vehicles to transport all the seized drugs,” Garro added.

According to the complaint, Jones, Justin R. Michl, Tyrone E. Keith, and George D. May are facing federal charges.

A press conference on the large bust was scheduled to take place last Friday at the Akron Police Department, but it was canceled out of respect for Cleveland Detective James Skernivitz who was killed in the line of duty.

Garro said when it comes to manufactured marijuana and THC vapes, there is a serious, potential danger because the user doesn’t know what’s in it.

“You can sell hemp and hemp products, but by Ohio law, hemp has got to have less than .3 percent THC content. This was higher than that,” he said.

Garro said no one from the vape shop has been charged, but the investigation is continuing.

The global market for Tires is forecast to reach 2. 7 billion units by 2025

CEO: Va.-based non-profit to double distribution of donated goods in 2020 due to COVID – WJLA