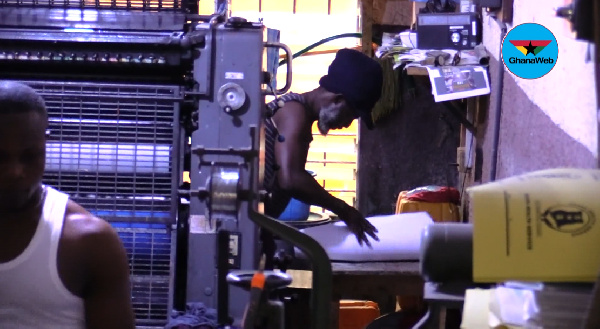 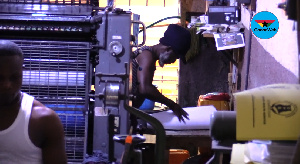 Over two thousand (2000) workers in Ghana’s Printing Industry risk losing their jobs as the industry faces its worst fears of imminent collapse.

The Printers Association lament the Education Ministry has centralized all printing within the national and district offices depriving them of their biggest clientele which are schools.

“Since the roll out of the Free SHS, procurement of education materials such as exercise books and note books have been centralized at the central government headquarters in Accra.” The acting chair of the Printers Association Yaw Oti Boateng stated in a news conference in the Printing hub of Asafo in Kumasi.

The association argued an initiative to ban all schools from purchasing supplementary books has further cut their contracts from book writers.

Mr. Oti Boateng indicated: “Before free education policies, schools were allowed to procure text books In addition to the one supplied by government. This created jobs for our members and their workers. The current system does not allow schools to do that.”

They further lashed out at government for contracting Chinese and Indian firms to supply printing machines to all education offices to undertake their own printing of question papers and answer booklets which hitherto was done by private printing houses.

The printing houses owners disclosed they have had to lay off two-thirds of their workers in the face of difficulties in generating enough revenue to keep paying salaries.

They contended, their hopes in banking on printing posters for politicians ahead of the elections did not materialize as they claimed politicians had crowded them out with their own printing companies.

“Its few days to elections but go around and see if any printing press has any contract to print materials for political parties. The politicians themselves have turned into printers and doing the jobs,” Yaw Oti Boateng bemoaned.

The printing houses further expressed worry the Ghana Revenue Authority and the Kumasi Metropolitan Assembly keep taunting them while they struggle to raise decent revenue to pay taxes and business operation permits.

They called on government to review its new regimes on the publishing of books and other education related materials to save the age-old industry from collapse.

Some workers who spoke to Ultimate FM’s reporter Ivan Heathcote – Fumador noted that they were now left with the option of wishing that people had wedding ceremonies and funerals so they could print invitation cards and funeral posters.

I-70 Will Reopen In ‘Days, Not Weeks,’ CDOT Says. But Drivers Should Still Be Wary