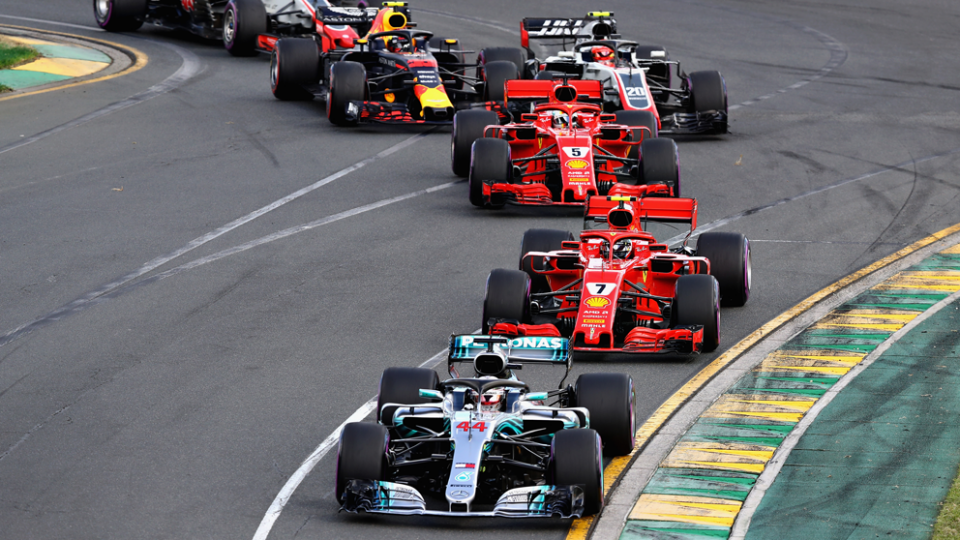 Here’s how to pretend you know everything there is to know about F1… drivers, ready?

While you and the rest of the world will be watching as the action goes down at Albert Park from March 12 to 15, there is a way to sound far more knowledgeable than most when it comes to the Aussie Grand Prix.

So sit back, get comfortable and prepare to get F1 ready, without leaving the couch.

Formula 1 is the highest class of single-seater auto racing sanctioned by the Fédération Internationale de l’Automobile (FIA) and owned by the Formula 1 Group. The word “formula” in the name refers to the set of rules to which all participants’ cars must conform — a single-seater with open wheels — totally different from your common or garden road cars. A Formula 1 season consists of a series of races, known as Grands Prix (French for ”grand prizes” or “great prizes”), which take place worldwide on purpose-built circuits and on public roads.

Well, kind of. You see, the Australian Grand Prix only became part of the formula one championship in 1985, and before that, it was held all over the country, from Tassie to Philip Island. Then, when the Australian Grand Prix and the Formula 1 came together in 1985, the race took place in Adelaide for over 10 years. Then in 1996, the race moved to its new home in Melbourne and became the first race in the worldwide championship calendar.

8. There Is A Reason There Are Two Cars Per Team In The Grand Prix

If you’re confused by the fact that teams are not only racing against other teams but they’re also racing each other (what the?) then prepare to be enlightened. It’s actually kinda simple.

7. The Driver Is Only One Tiny Bit Of The Puzzle

While the driver may be the one getting all of the attention, the glory and the champagne, F1 is very much a team sport. McLaren actually has over 4000 employees worldwide and is constantly updating and researching how to make the cars the best they can be with the power of Dell computers behind them — analysing huge amounts of data in real-time.  And for each race, they have over 60 people who travel with the team and 40 tons of freight including a sophisticated computer system powered by Dell.

The preparations begin 10 days before the race when the ‘pre set-up’ crew arrives to build and prepare the pit garage. All of the heavy equipment travels by boat — things like partner panels, work benches and generators — and in fact, McLaren has five sets of sea freight, all heading to different parts of the world at the same time. The mechanics arrive to unpack it all, then the race engineers arrive and start to build the cars themselves, before practising the pit stops and walking the track with the drivers. Don’t forget the catering staff, nutritionists and others who are also part of the action, and the pit crew and managers who make it all run smoothly on the big day.

Up until recently, F1 cars were started with an external motor with a long shaft which was fed in from the back of the car. Now things are started with software. However, you can’t start an F1 car from cold — you have to preheat it by circulating hot oil before turning it on and monitoring it all by computer.  And you thought your Mini was hard to start on a cold day!

5. The Teams Are Constantly Using Technology To Make The Cars Perform Better

Take the new McLaren MCL35 which was launched just ahead of this GP season and tested in Barcelona in February — ready for drivers Carlos Sainz and Lando Norris to drive in Melbourne. While it’s super secretive, we know that the British automotive manufacturer uses Dell software, hardware and data analytics to help make the cars the best they can be. During races all over the world, car-mounted sensors feed info back to the McLaren team — the sensors on the car generating 100GB of data to be analysed by the engineers to improve performance. And afterwards the drivers spend as much time with their engineers and their laptops studying data, track footage, and discussing strategy.

Dell also help McLaren with driver health and wellbeing, based on all the data they get fed during real-time. And even in the pits themselves, it’s all about technology, with McLaren’s pit wall — a mission control for the team to give the driver constant updates on track conditions — powered by Dell computers. Dell enables connectivity and reliability in the massive scale required to keep McLaren running, innovating and performing.

4. Drivers Drink As They Drive… (And Yes, They Also Go To The Loo!)

While they can’t drive in to the local 7/11 and grab a drink, F1 drivers can keep their fluids up while they drive. In fact, it’s imperative they do — the cockpit can reach over 50 degrees celsius. Along with the physical exertion of driving, they’re also dressed in several layers of fireproof clothing, so they are going sweat, and sweat a lot – a driver can lose four kg of fluid during the race! So, F1 cars are equipped with a “drinks system” — a simple bag of fluid with a pump like a windshield wiper pump. The “drinks” button sits on the steering wheel, with the tube feeding the driver through the helmet.

And it’s not water they’re drinking — it’s an isotonic mixture to help with blood sugar and hydration.

And while drivers can relieve themselves before a race, sometimes they just have no choice but to, erm well, go, in their suits during the race. So now you know.

3. They’re Not Just Sitting There… Drivers Actually Have To Be Super Fit

F1 is an extremely physically demanding sport, even though you may think the drivers are just sitting there… they actually have to undergo a lot of conditioning to get in shape for the season. The heart rate of an F1 driver can reach 180bpm during the two hours of high-intensity racing. They need muscular strength and endurance to drive the car, need to specially train their neck muscles and also need to be able to withstand the constant exposure to high G-force created while accelerating, decelerating and cornering at high speed AND have the ability to drive under extreme heat. McLaren keep a keen eye on the health and wellbeing of their drivers, analysing data gathered by Dell sensors inside the car, which is fed back to head office in real-time.

2. The Drivers Can Talk To The Pit Crew As They Drive (But Not To Each Other)

Race engineers mainly do the talking to drivers during a race, about how they’re going, how the car is running etc. However other members of the team such as those on the pit wall — the team principal or technical engineer — can also communicate with the drivers if needed. Pretty much all the team can hear their respective car, their crew and the pit crew channels. They can’t talk to other drivers though, as that could distract them from the race.

That isn’t strictly true — they have MORE than seatbelts. Compulsory since 1972, today F1 seat belts comprise a six-point harness, which can be released by the driver with a single hand movement  — they also have the ability to remove the steering wheel. Cars are built to keep the drivers as safe as possible, with the cockpit housed in something called the monocoque  — that protects the driver in case of a crash. Drivers wear a head and neck stabilising device and a specially made helmet and suit. And even more safety-conscious — all Formula One cars must be equipped with a very impressive fire extinguisher system.