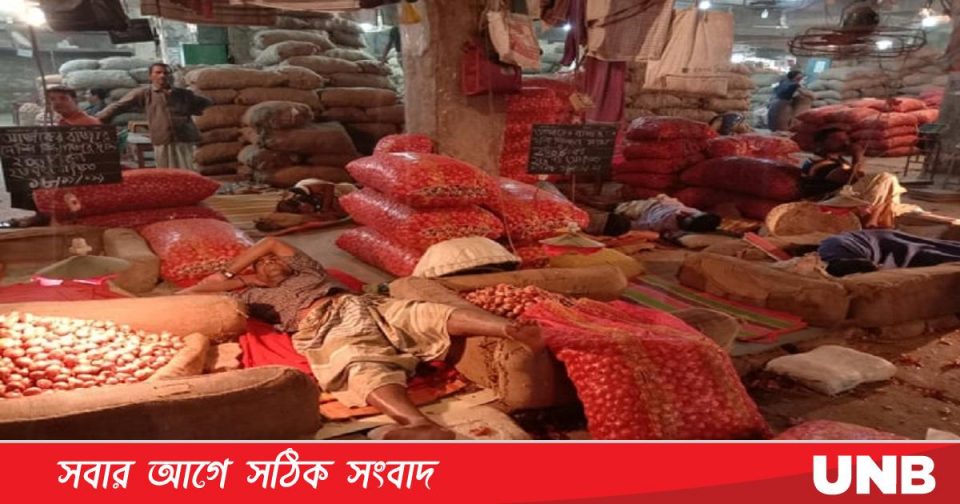 The price of onion saw a significant fall by Tk 40-60 per kg at the wholesale market while by Tk 10-20 at the retail market on Tuesday with many traders still passing idle time for lack of buyers.

Traders said the onion price might keep falling till Friday and reach a stable level on Saturday.

Biswajit Paul, a stockist at Shyambazar, told UNB that the onion price saw a significant fall at the wholesale market. “A syndicate of importers jacked up the onion price that shot up to as high as Tk 260 per kg in the retail market this year. They created an artificial crisis to get extra profit. Now it has fallen significantly,” he said. 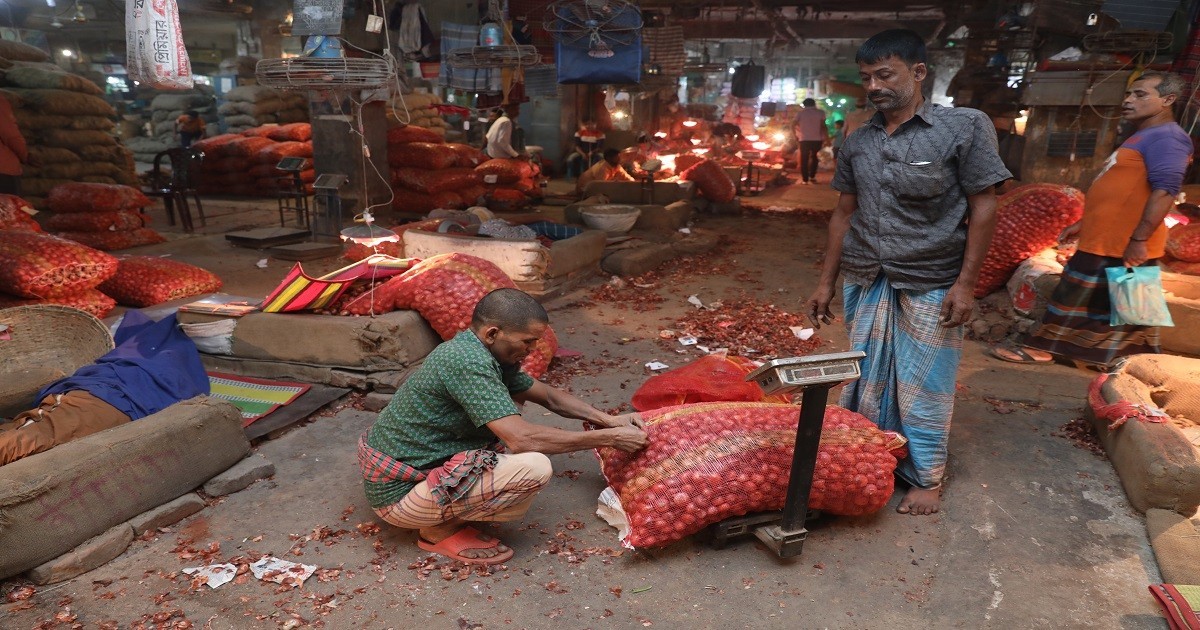 He said they were passing idle time for lack of customers as the retailers do not buy onion fearing loss.

Biswajit also said they were selling the Burmese variety of onion at Tk 100-120 a kg which was Tk 160-170 on Monday. “We don’t have to count any loss as we take a 30-paisa commission per kg only. But some small traders who bought onion earlier at a high price are now counting losses.”

Manik Saha, a wholesaler at the market, said they were selling rotten onion for Tk 30 a kg while half-rotten one for Tk 50 and better quality one for Tk 130.

Another stockist at Shyambazar, Almas Hossain, said their wholesaler Ayub Ali bought locally-grown onion at Tk 220 per kg from farmers of his village in Faridpur several days ago but he has to sell those at Tk 150 now for lack of customers. 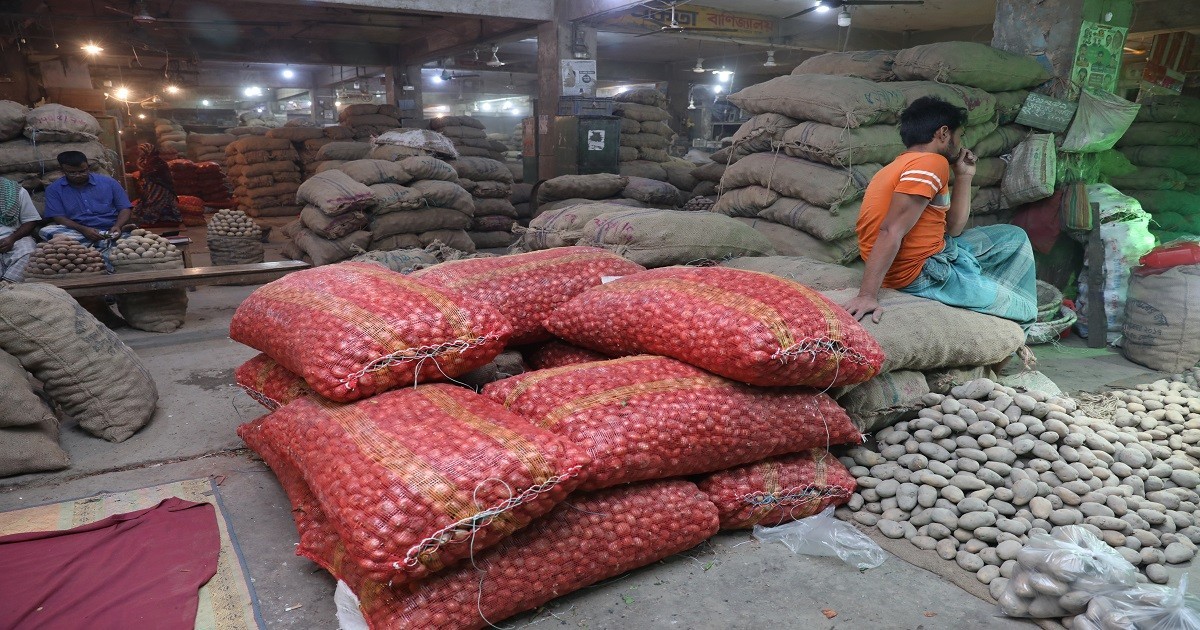 Abdus Salam, a wholesaler at Karwan Bazar, told UNB that he was selling Egyptian variety of onion at Tk 110-120 per kg and the Burmese one at Tk 150-160 on Tuesday. However, no one came to his shop to buy onion till 4pm.

Hridoy, another wholesaler at the market, said he usually sells 100-120 sacks of onion every day.

But he sold only 10-12 sacks of onion on average when the price started falling since Friday last. The sale in the last three days was almost zero, he added.

Anwar Hossain, an onion supplier of super shop Shwapno, said the trend of the price fall might continue till Friday and the price will come under control from the next week.

Billal Hossain, another wholesaler of the same market, said he has been selling local onion at Tk 155 while Egyptian one at Tk 120.

He, however, said the presence of buyers was very thin. 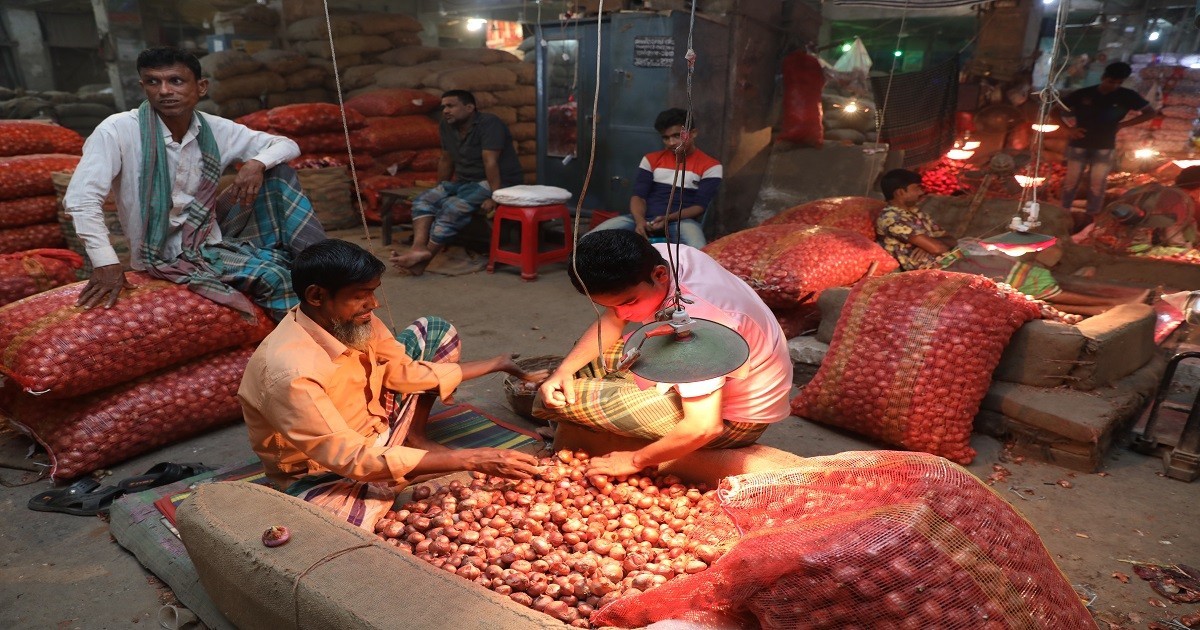 Jamsed Mia, a resident of Rampura, said he bought one kg onion for Tk 160 on Tuesday.

Farzana Begum of Old Dhaka said they were upset to see the onion price hike this year. “We’ve cut the consumption of onion due to the unusual price hike. However, it’s good news that the price started to fall. We, the general public, have to suffer if any essential’s price is increased abnormally,” she said.

The price of onion, a common ingredient in Bangladeshi kitchens, started soaring in the country after India announced banned its export on September 29 last.

The price reached as high as Tk 260 per kg in the retail market on Saturday before marking a fall on Sunday.

The onion price remained unchanged in the wholesale markets on November 16 after the government on November 15 said onions were being flown in from Turkey, Egypt, Afghanistan and the UAE on an emergency basis at the initiative of the Commerce Ministry to keep the local market stable.

The onion price started falling on Sunday after the Prime Minister on Saturday said the government took initiatives to import onion through cargo planes to bring down the price and the local variety started arriving in the market.

‘The supply chain is getting shorter and shorter’

General Election 2019: Where do parties stand on key issues?