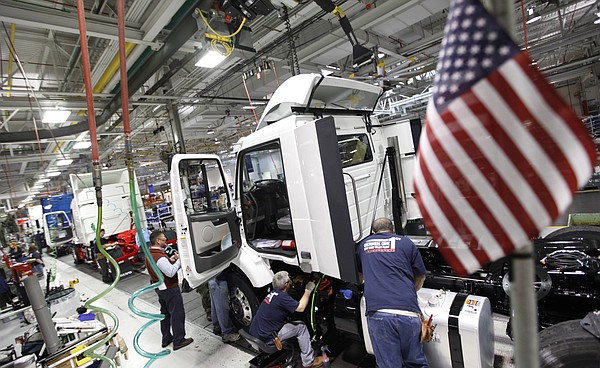 Spokesman John Mies wouldn’t say how many United Auto Workers members went inside the factory in Dublin, Va., near Roanoke. But he said in an email that it will take a few days to get assembly lines back up and running at the plant, which employs 2,900 UAW workers.

Union members at the heavy truck assembly plant have voted down three tentative contract agreements reached with local union negotiators, with the most recent rejection coming Friday. They initially went on strike in April.

Union spokesman Brian Rothenberg said about 10 workers crossed the lines Monday morning, in addition to a “handful” of union workers who had gone to work earlier. He said he didn’t have exact numbers. Rothenberg said that in any strike, a small number of workers cross picket lines.

Workers will vote again on the third agreement Wednesday. “Our final offer is on the table,” Mies said in an email Monday.

The recalcitrant strikers could be a sign that workers feel more emboldened because employers are having a hard time finding skilled workers.

“There’s less fear of never finding another job, and that does mean that the gamble for the membership is not as severe,” said Arthur Wheaton, a labor expert who teaches at Cornell University’s Worker Institute.

He said that while workers may not find a job quite as good as the one they have at Volvo in southwestern Virginia, they could be thinking: “‘If they fire us or replace us, how many people have the skill set to build these heavy trucks? … There’s not a lot of us around. And we think you’re gonna have to pay us.'”

Volvo could take a risk by hiring permanent employees to replace striking workers because the new workers may not be at the same skill level, he said. “They aren’t just building a little tiny golf cart. These things are huge, and they have a lot of parts to them.”

On Friday, Volvo Trucks said in a statement that it would implement terms of the third agreement, reached with local union leaders on July 1. Returning employees would get the agreement’s wages and benefits.

A copy of the third agreement shows workers with one year of experience would start at $20.60 per hour, progressing to a top wage of $30.92 when the contract ends in 2026.

In a video message posted to Facebook on Sunday, the president of the UAW local at the plant urged workers not to go back to their jobs.