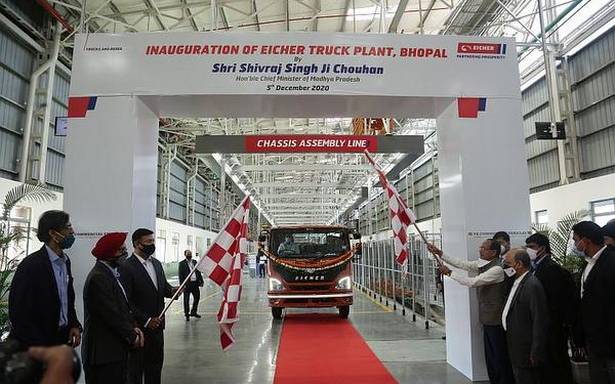 The new factory, which was inaugurated by the Chief Minister of Madhya Pradesh Shivraj Singh Chouhan, is the 8th manufacturing facility of VECV in the state. The factory, which has come up on a 150-acre area, will employ about 1,500 workers in the initial phase.

Also, since the opening of the first plant in M.P in 1986, VECV has invested more than ₹5,000 crore in its eight plants and has created direct or indirect employment for over 30,000 people including suppliers and associates in Madhya Pradesh.

“The new factory, which has been built on industry 4.0 standards, has fully equipped automated manufacturing process and MES control along with connected machines and supply systems. Its initial capacity will be 40,000 units. The Prithampur plant has a capacity of 90,000 unit and hence the combined capacity will be 130,000 units. This will make VECV completely ready when the demand comes back. Vinod Aggarwal, MD & CEO told BusinessLine.

He said the company was seeing uptick in sales of trucks in the domestic market in the past two months – October and November.

“Despite COVID19 related challenges, VECV managed to add 38 more touch points across the country during the first half of this fiscal. Overall, it is planning to add 100 touch points in this current year in Eicher truck and bus network and in the Volvo network.

“The new plant will help us produce state-of-the-art products which will increase the participation in the total export market. The plant will be used for manufacturing Pro 2000 series (3.5-16 tonne GVW). These trucks have special demand in Indonesia,” said Aggarwal.

On the export front, it is planning to add five new markets with expansion across Latin America and North Africa. It has already been exporting to 35 markets.