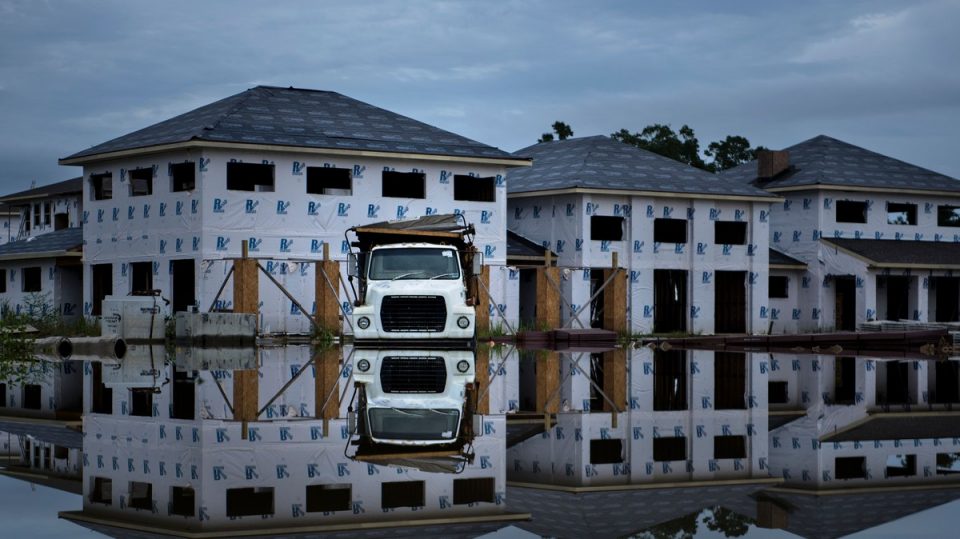 This article originally appeared on VICE US.

After Hurricane Sandy slammed into Staten Island and killed 24 people in 2012, a general contractor named Chris Reno started buying up damaged properties for bargain prices. On one he built his dream house: a 5,000-square-foot residence in one of New York’s most dangerous flood zones. Objectively, this is a pretty big risk. Sandy-level flooding, which was a once-in-400-years event, could now occur once every 23 years thanks to climate change.

But Reno believes his house is built so sturdily that it can survive what will come next. “I don’t know if you could knock this house down with a direct hit from a hurricane,” he recently told the New York Post.

As the world warms, natural disasters like floods and fires are likely to become more intense and hit areas formally left unscathed. And yet people like Reno are perfectly happy to defy the odds and live in the path of these calamities. This attitude is more common than you might think. That’s what financial researcher Lint Barrage found when she went knocking on people’s doors up and down the coast of Rhode Island, which could experience nearly 12 feet of sea level rise by the end of the century, and where 25,000 people are already exposed to damaging floods. Barrage and her team discovered that people most vulnerable to climate dangers tend to be way more optimistic that those dangers won’t materialize than people in safer areas.

“We find that the majority of coastal residents underestimate their homes’ flood risks relative to inundation models, and that 40% of flood zone respondents say they are ‘not at all’ worried about flooding over the next ten years,” a 2018 paper she co-authored reads. “In contrast, a plurality of respondents living further inland indicate that they would be ‘very worried’ about flooding if they lived on the coast.”

The risk-takers are, like Reno, willing to overlook longer-term danger for shorter-term financial gain. “One potential contributor to why people live where they live is that if you’re less worried about certain risks then you’re more likely to purchase a home in a risky area because relatively speaking that looks like a better deal to you,” said Barrage, who is now an assistant professor of economics at U.C. Santa Barbara.

We tend to think of climate denial as a political position adopted by Republicans and funded by the fossil fuel industry. But the short-term incentives of our housing market are encouraging another potent strain of denial: the idea that millions of Americans living in harm’s way of climate change have nothing to fear because the impacts are slow, gradual, and predictable, despite the number of climate-driven disasters and other costly events rapidly increasing.

On a national scale, some experts say, this delusional belief is stalling the massive government-led mobilization we need to relocate communities out of danger zones, protect people’s homes and life savings from being destroyed, and prevent people from drowning in storm surges or burning to death in wildfires.

“There’s absolutely no time to lose,” said Billy Fleming, a landscape architecture professor at the University of Pennsylvania who also studies the urban policy implications of the Green New Deal. “Every day we do not spend organizing communities around this question of ‘how do we leave and where do we go?’ is just making all of these other decisions harder and more expensive down the road.”

In the meantime, people are refusing to move away from danger. Just over a year after the Camp Fire roared through Paradise, California, killing 85 people and torching 19,000 homes and other buildings, some former homeowners are rebuilding. “I want people to see that Paradise is a place to return home to,” resident Victoria Sinclaire told the Associated Press. “The scars run deep here, but so do the roots that help it grow.” However, Paradise is no safer than before. Dry conditions continue to make that region of California at risk of fire for many months out of the year, and utility company PG&E’s outdated infrastructure could spark a blaze at any time. “As we saw in the Camp Fire, the town’s really well set up to kill people with wildfire,” wildfire expert Zeke Lunder explained to the AP.

People live in climate change’s path of destruction for a variety of reasons. There is the comfort of remaining in an area you’ve grown up in, the so-called “pioneering spirit” described by California governor Gavin Newson when he said he wouldn’t attempt to block construction in fire zones. The American Dream often equates success in life with homeownership, no matter what you have to risk to achieve it. Retreating from dangerous areas—even the kind of “managed retreat” advocated by some experts—sounds to many like surrender.

There are also simple economic factors at play. Rural communities such as Paradise are much more affordable to live in than other areas of California, which is in a dire affordable housing crisis. The Camp Fire itself also created short-term incentives for development. Author and activist Naomi Klein recently reported in the Intercept of “people buying up property in smoldering Paradise at bargain-basement prices.” One developer is now proposing an 1,100-unit housing project on the outskirts of town.

But it’s not just lower-income people being funneled into vulnerable areas by a housing market seemingly in denial about climate change. In Boston, developers like WS Development are leading a massive 1,000-acre expansion of oceanfront real estate, including a $360 million luxury condo tower, in a port area that currently floods a dozen times each year.

“There’s a reason why developers and financiers continue to pour money into places we know are going to be, if not underwater, then dramatically more vulnerable by the mid-to-late 21st century,” Fleming said. “It’s because they know in the short term they can continue to extract a ton of money from that.”

Clearly the U.S. housing market is on a crash course with reality. But Barrage cautions that forcing people to give up their denial too fast could be socially damaging. For example, a law forcing the market to factor in the true risks of climate change into investment decisions could result in a rapid decline in housing prices caused by investors, developers, insurers, and homeowners fleeing en masse from vulnerable areas. That would harm those who lack the resources to join the exodus.

“In reality, there are serious distributional (not to mention political) concerns associated with this idea,” Barrage has explained. “People may have stereotypes in their heads about coastal homes as millionaire mansions, but there are plenty of low-income folks who live in vulnerable homes.”

At the same time, governments must learn how to say no to the capitalistic logic that people’s financial and physical safety can be sacrificed for short-term profits. Last year the city of Virginia Beach did this by rejecting a new housing development in a high-risk flood area, a decision for which developers unsuccessfully tried to sue. This is the shift in mindset, experts like Fleming say, that we desperately need our federal leaders to begin adopting.

“We need to think about national scale problems like managed retreat at the scale of the country and not community by community or neighborhood by neighborhood,” he said. “It’s time to invest in people’s safety and security and happiness, which is going to mean finding other ways and places for them to live.”

Geoff Dembicki is the author of Are We Screwed? How a New Generation Is Fighting to Survive Climate Change. Follow him on Twitter.

EPA in strife after two years of crisis