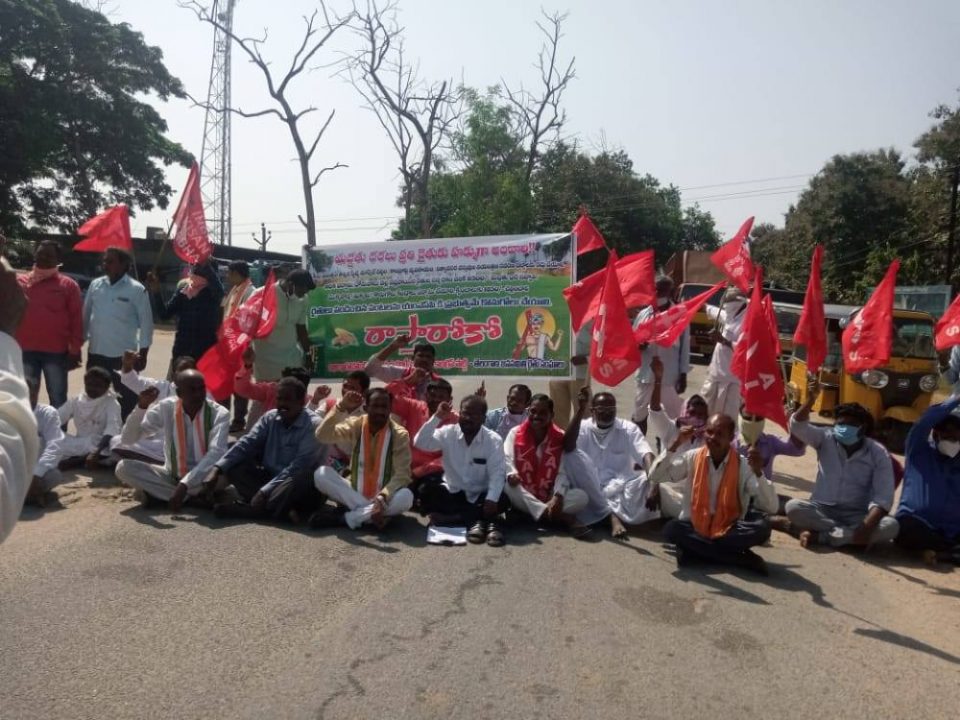 Hyderabad: Farmers across Telangana are up in arms, demanding minimum support price (MSP) during the ongoing procurement process and compensation for crop damage in the recent floods in the state. Farmers unions are intensifying their protests and have called for a grameena bandh on November 26.

Paddy and cotton farmers are faced with problems in procurement related problems, said T. Sagar, general secretary of the Telangana Rythu Sangam. “The Telangana government has encouraged farmers to grow sanna rakala (fine variety) paddy in this season. The MSP is fixed as Rs 2,500 per quintal. With the delay in procurement, farmers are forced to sell their crop for as low as Rs 1,500 per quintal, incurring losses as a result,” said Sagar.

In Miryalaguda town in Nalgonda district – a hub of rice mills – farmers are queuing up before market yards and rice mills due to the delay in procurement and surplus produce.

“The officials have started a token system for the procurement process but it is causing confusion among farmers,” said Rajashekar, a farmer in Nalgonda. “Due to the delay in procurement, transporting paddy has become expensive,” he said.

The Telangana Rythu Sangham and other farmer organisations have called for a series of protest demonstrations between November 16 and November 26 and a grameena bandh.

According to the government, during Vaanakalam or the Kharif season, crops were sown across 1.26 crore acres of land in the state.

“Cotton farmers are incurring massive losses due to the delay in procurement by the Cotton Commission of India (CCI),” said Ravi Kanneganti of Rythu Swarajya Vedika, an agricultural co-operative. “The CCI fixed the MSP for cotton at Rs 5,800 per quintal. Given the shortage of CCI centres, farmers were compelled to sell their produce for prices as low as Rs 4,490 per quintal,” he said.

Farmers organisations estimate that about 20 lakh acres of agriculture land was damaged across the state due to the floods in October.

“Neither the central nor state governments announced any compensation to the farmers for crop damage,” said Sagar.

Women in Supply Chain Show What They’re Made Of: Janet Deverso of TradeTrans Corporation

Fawlty Towers episode to be reinstated to streaming platform after outcry