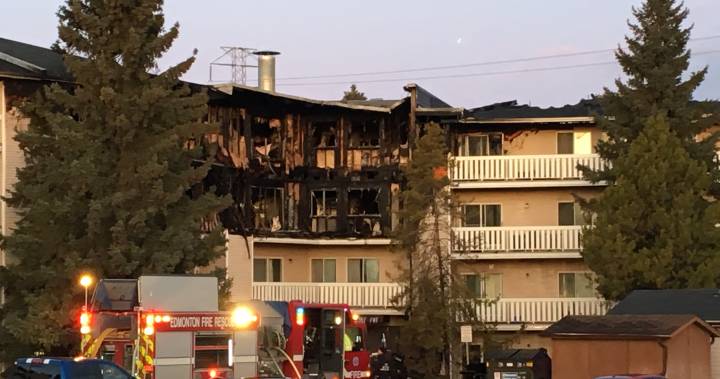 Several residents at a south Edmonton apartment building say they want to see it designated non-smoking, after a blaze forced nearly 200 people from their homes. The fire was caused by improperly discarded smoking materials, according to officials, and caused $3.7 million in damage.

Fire crews were called to the 132-unit Strathmore Manor building at 29 Avenue and 109 Street just before 3:30 a.m. Monday.

‘Smoking fires continue to challenge us in Edmonton’

Edmonton Fire Rescue Services said Friday smoking material put out in a planter was to blame for the fire.

“It’s very upsetting,” said Charles Burrell, who has lived in the building for 14 years and went through the last fire at the building.

“That’s two fires that are caused by smokers. Maybe it’s time for the building to go non-smoking just because of how many fires have been caused in the last decade by fires,” he said.

“It makes me very angry and very upset that it’s another smoker carelessly throwing away their cigarettes.”

The overall damage is estimated to cost $3.7 million — $2.5 million to the structure and $1.2 million to contents.

“I’m pretty upset that it’s another smoker because this caused all this damage again,” Burrell said.

“Easily fixed, yes. But people don’t seem to take care when they’re smoking and that is a problem.”

Lisa Houssian and her mother, Vera Houssian, also live in the building. Vera has been there for 25 years and also experienced the last fire. The mother and daughter are both smokers themselves but are also calling for change.

“Please make it a smoke-free building,” Lisa said. “I hope so. I really do and I think a lot of us should be voicing our concerns to the management company.

So far this year, 55 fires in Edmonton were due to smoking-related causes, deputy fire chief Russell Croomb said, adding seven were a result of cigarettes or other smoking materials being put out in planters.

“Smoking fires continue to challenge us in Edmonton,” he said. “We’re trying to get it out that people need to take responsibility for their actions and to be aware of activities they do may or may not put others at risk. This is a very preventable type of accident.”

Croomb explained that planters are often filled with peat moss, a very combustible material that can smoulder for quite some time.


READ MORE:
Damage from smoking-related fires is on disturbing upward trend in Edmonton

A lawyer who specializes in condominium law says fires caused by smoking in buildings like these can lead to increased insurance rates.

“One of the most common ways to eliminate a claim, for example, would be to eliminate smoking in the building,” Robert Noce said earlier this week.

‘It’s been an emotional roller-coaster’

The fire sent one firefighter to hospital with a back injury. No other injuries were reported.

EFRS said the building has now been turned back to the property owner. It’s not known how long the 170 displaced residents — which include 38 children and 11 seniors — will be out of their homes.

“They haven’t given us any definite times. My insurance company has suggested that we find another place to live,” Burell said.

“It does make me want to leave the building. It’s an all wooden construction so … I would look at another place to live in, that is for sure.”

Vera and Lisa are staying with family for the time being. They, too, would like to know when they’ll be allowed back inside.

“It’s been hard. It’s been an emotional roller-coaster,” Lisa said. “I want to know when we can go home or when I can go get some of my belongings to make my stay with my sister better.”

A man who said he was a manager at the property management company Capital Management Ltd. said he had no comment.

Why customers should be at the heart of software development | Procurement