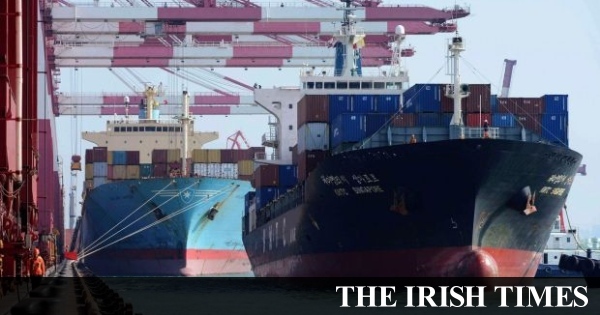 On Thursday night, the Revenue Commissioners issued a general code to allow traders and hauliers circumvent customs arrangements to allow them to move goods on ferries from Britain.

This will allow traders ship goods that they have struggled to move over recent days due to the new EU-UK border and customs checks that have delayed long-established supply chains.

The move is aimed at helping businesses that have been unable to ship goods from Britain since Brexit came into effect a week ago because they were unprepared for new customs and regulatory requirements on the shipment of British goods into Irish ports.

It comes after Stena Line, the largest ferry company operating on the Irish Sea, cancelled 12 sailings over the next five days due to low freight volumes and empty ferries arising from the failure of Irish businesses to move goods as a result of the new post-Brexit red tape.

Revenue said it was aware of “the growing number of trucks in Great Britain that are waiting to move goods to Ireland” and that trucks have been denied boarding onto ferries at the port of Holyhead.

It was implementing the additional measures around safety and security declarations that would help businesses “meet their obligations and get goods moving”.

In a sign of the severe difficulties facing Irish businesses from Brexit, the Revenue has issued the emergency code to cover an identification number that traders would ordinarily have to generate themselves by submitting entry summaries and customs declarations in advance.

In an email to businesses on Thursday night, the Revenue said that it recognised that some businesses were “experiencing difficulties” in lodging their safety and security entry summary declaration, or ENS, for moving goods on roll-on, roll-off lorries and other goods vehicles.

“In response, Revenue is implementing a temporary easement to alleviate these current difficulties,” said Ray Ryan, an official in the Brexit unit of Revenue’s customs division.

Businesses were told that they could use the code as the ENS and movement reference number or MRN – a key customs number needed to generate a pre-boarding notification, or PBN, that, since Brexit, shipping lines require to permit lorries to board Irish-bound ferries in Britain.

The code could be used immediately on a temporary basis “where you are unable to generate same due to the absence of key information or because of other impediments that prevent you completing the ENS process,” said Mr Ryan.

“This will facilitate the completion of your customs formalities, the creation and population of the PBN and ultimately boarding of the ferry for movement of your goods.”

The notice says that it expects businesses “with genuine difficulties” to engage early with Revenue in a “cooperative endeavour to overcome their difficulties” and warns them that the “temporary easement” may be withdrawn if they fail to do so.

“The easement will benefit the haulage sector who are responsible for safety and security declarations and in turn generating the pre-boarding notification, which is needed to board a ferry,” said Aidan Flynn, general manager of FTA Ireland.

“This has proved troublesome to say the least with numerous loads grounded in Britain because they could not complete the paperwork correctly.”

The UK’s departure from the EU single market and customs union on December 31st is forecast to lead to a 12-fold increase in customs declarations on Irish-British trade to 20 million a year.

The Revenue said in response to queries from The Irish Times on Thursday night that the extent of the difficulties facing businesses from “the necessary changes” brought about by Brexit was evident from its engagement with trade, industry and business groups over the past week.

“It is clear that many were not as prepared as they thought or significantly underestimated what was involved in being Brexit ready,” said a spokeswoman for the Revenue.

“Revenue will continue to actively work with trade and business, on both a collective and individual basis, to assist them in overcoming the challenges and issues arising.”

Traders have been warned if their customs declarations are incomplete or they do not have the required documents for santiary and phytosanitary checks on live animals, plants, or food products of plant or animal origin, then lorries and their goods will be “held up at the port.”

“We have consistently emphasised the importance of timely and accurate information and data in all aspects of dealing with customs formalities,” the Revenue said.

The Revenue said that it was aware that new customs formalities present “significant challenges and impose additional burdens on businesses”.

However, the Revenue spokeswoman said that it expected these challenges to arise “where trade and business didn’t make the advance planning arrangements that we have strongly advocated over at least the last two years”.

“We made it very clear in our engagements with industry that real, permanent and immediate changes would arise,” she said.

“This is the outworking of that warning.”

‘Chinese authorities say there needs to be a rates ceiling’: Saadé