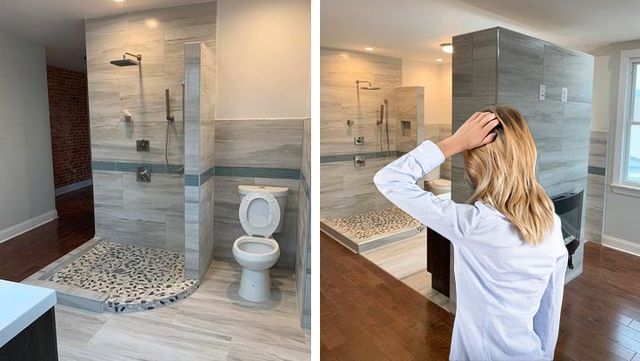 Open-concept floor plans are all the rage in real estate. Walls are crumbling left and right to make way for open-concept kitchens and free-flowing living-dining areas.

But how would you feel about an open-concept bathroom? Are restrooms without walls—or doors—the next big trend in homes?

This listing, recently posted on Facebook by Philly Wholesalers Real Estate Group, featured just that: a master suite with an “open-concept bathroom area.” Essentially, the area featured a vanity, shower, and toilet—all with no door and no privacy.

The listing garnered lots of attention on Twitter recently, thanks to user @amelendez1996, who shared the listing photos, commenting, “Only the brave will poop while their friends are over and can see you.”

philly is WILD this bathroom has NO DOORS and they’re calling it “open concept” pic.twitter.com/GUffKs6HGY

Naturally, many others chimed in to express their outrage, embarrassment—and to reveal that this idea isn’t as uncommon as one might think.

“This just happened to me and my BF,” shared one commentator. “Checked into a hotel and the bathroom walls didn’t go to the ceiling (it was a “chic” renovated factory building), so you could hear EVERYTHING. Ugh so gross.”

“My master bathroom is just like this. ZERO privacy,” added another. “We were actually on HGTV Beach Hunters. Season 2, Episode 5. Feel free to go look at our [bleep] bathroom yourselves!”

The listing agent, Kamara Abdur-Rahim, says the place is still for rent. She says she’s seen similar open-concept bathroom styles from her travels around the world, and the response to the unique bathroom in her listing has been positive.

“Everyone loves it, because they understand it’s a private suite for just them or a couple,” she says. “Also, glass shower panels would be added giving it the look I envisioned.”

Open-concept bathrooms are real, and making a splash

By the way, for the record, we at realtor.com® have brought up the open-concept bathroom idea before—albeit as a fictional (or so we thought) April Fool’s joke.

“You can do your duty and simultaneously catch up with family members, friends, and cable TV repairmen in your living room,” we wrote. “Talk about a time-saver! No doors to open and close, or locks to fiddle with, in the pursuit of antiquated notions of privacy.”

We never imagined the open bathroom could become real. But how big is this trend, anyway?

As strange as it may seem, numerous interior designers and real estate agents claim that open-concept bathrooms are actually growing more popular, but most (unlike the listing above) maintain some kind of privacy.

“I have worked on more-open bathrooms, where the sinks or bathtubs or shower areas are more open or have no door, but there is always a door on the toilet area,” says Pamela Durkin of Pamela Durkin Designs in Naples, FL. “Some spaces deserve privacy.”

Other bathroom designs feature showers that share a glass wall with the bedroom, to offer an ocean view. Plus, you can always frost the glass if you need privacy, she says.

“In my market, [it’s] mostly the retired and singles, but young couples as well are fine with it,” Durkin says of the open bathrooms.

“While it appears a bit strange at first sight, some of the higher-end luxury bathrooms are done very tastefully and do offer some sort of privacy,” he says.

For instance, homeowners in the Phoenix area appreciate outdoor lifestyles, and as such, Zschunke says more homes are incorporating large windows to bring the outdoors in—even in bathrooms.

How to pull off an open-concept bathroom

Open-concepts work well when space is limited, says John Monte, an interior designer, home organizer, and educator based in Seattle.

“It offers an illusion of space, but the trick is making them flow with the rest of the home in a way that makes sense,” he says.

For spalike designs, an open-concept bathroom design can add a sense of calmness or serenity, maximize a view, or allow for more natural light.

“While it’s certainly not for everyone, there’s a method for executing it luxuriously,” Monte says. Usually that means adding a (possibly frosted) glass barrier or pony wall to offer some level of privacy.

For someone using a wheelchair with limited mobility or who needs assistance in the bathroom or shower, an open-concept bathroom, without a door in the way, offers many benefits, adds Natalie Gilbert of Harbor Road Staging Design in Los Angeles.

“Undoubtedly, you could have a similar effect from a barn-style door that’s left open, but this takes that a step further,” she says.

While people focus on the lack of privacy, the open-concept bathroom is based on the idea that many homeowners with a master suite often shut the bedroom door but leave their bathroom open, even when it’s in use, Gilbert explains.

But open bathrooms aren’t for everyone

Adventurous buyers may be most interested in open bathrooms, real estate agents say. But not everyone is keen on the concept.

“This is an abuse of the term ‘open concept,’ which should really only apply to kitchen and living rooms,” says Wendy Flynn, real estate agent with Keller Williams Bryan College Station in Texas. “This would be a reason for buyers to not purchase a home.”

Real estate agent Rebecca Hazzard of Re/Max of Rock River Valley in Illinois has a current listing with an open-concept bathroom, where the shower and vanities are open to the master bedroom but the toilet has its own enclosed space and door.

She’s shown the home about a dozen times, she says, and the common reaction from potential buyers ranges from “Oh, my!” to “This is different.”

At the majority of showings, she says she hears house hunters discussing one thing: how they could put in a wall.

The post P.U.! Why Open-Concept Bathrooms Could Spread to a Home Near You appeared first on Real Estate News & Insights | realtor.com®.

A Historic Zycus Horizon in the Historic City of Charleston