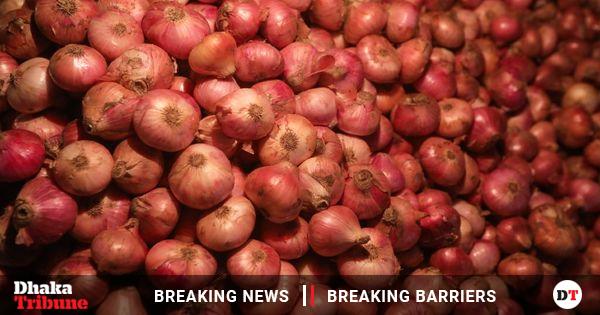 On Saturday, prices again rose to Tk42 to Tk43

Onion prices shot up in the kitchen markets of Chittagong over the last couple of days. Traders say it is a domino effect of rising prices in India.

According to Khatunganj market wholesalers, Indian onions sold for Tk31 to Tk32 per kg, last Wednesday.

However, prices shot up to Tk40 per kg in just one day, on Thursday.

On Saturday, prices again rose to Tk42 to Tk43.

However, on Sunday, the wholesale rate for a kg of Indian onions dropped to Tk37.

Visiting various kitchen markets of the port city, one could see that onions imported from India retailed at Tk45 per kg on Sunday, putting a dent in the pockets of low income people

“As you know, some onions got damaged due to recent floods in the southern part of India and that forced onion prices to go up by two to four rupees ($0.027 to $0.055) per kg there.

“With prices rising in India, importers at our land port have taken the opportunity to hike prices, forming a syndicate,” said the wholesaler.

“The rate will hover around the existing price for the next 10-15 days. The overheated onion market will cool down with the arrival of big consignments.

“Also, no onions have been imported from Myanmar through the Teknaf border due to the ongoing Covid-19 situation. Prices will drop further with imports from Myanmar,” hoped the wholesaler.

According to the Chittagong Plant Quarantine Station (Sea Port) of the Department of Agricultural Extension, Import Permits (IP) were issued for 750 metric tons of onion from August till September 5.

Of that, 450 metric tons was imported from Myanmar and the remaining came from China.

A total of 1,081 metric tons of imported onions entered Bangladesh through the Chittagong seaport between June and August this year.

Opinion | It is time for bipartisan de-escalation of political violence