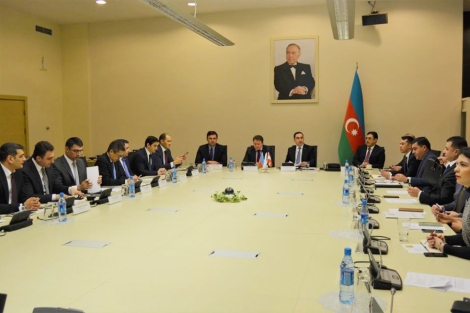 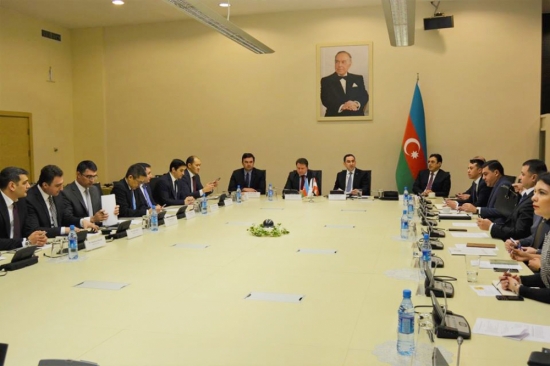 “Baku International Sea Trade Port” CJSC (Port of Baku) jointly with the Organization for Security and Cooperation in Europe (OSCE) has launched the project “Promoting Green Ports and Connectivity in the Caspian Region”.

The next meeting of the Working Group was held. Members of the Working Group, which includes public and private transport companies in the country, Thomas Kargl, member of the oversight board of the Rail Cargo Group, a subsidiary of the Austrian Federal Railroad (TRB) shared opinions on the company’s activities and increasing freight traffic. They also exchanged views on the development of the Caspian International Transport Route (Medium Corridor).

The Working Group has been informed that there is a need to transport 1.5 million containers a year in the East-West direction, and the number of containers transported between Europe and China is 600,000. This year, the Chinese government plans to transport 150 trains from Xi’an to Europe via the Baku Corridor through the Mediterranean and through Turkey.

Thomas Kargl, Board Member of “Rail Cargo Group”, announced that the first test train launched from Xian via the Middle Corridor in October 2019, was successful and shows the competitiveness of the middle corridor. Therefore Rail Cargo Group together with the Port of Baku plan in 2020 to launch new products from Europe through the Port of Baku to Central Asia and China and vice versa. RCG believes that the Middle Corridor has huge potential for substantial and regular cargo flow from Europe to China and vice versa. He is also informed that in the coming years, the number of freight moving from Europe to Asia and vice versa will increase, making the corridor more competitive. An Austrian railway official said the launch of the customs warehouse at the Baku Port in the coming months would serve the interests of large transnational companies operating in the Caspian Sea.

At the meeting it was decided that the next meeting of the Working Group will be attended by leading logistics and transport companies working in the transport sector of Europe, Turkey and Kazakhstan. It is expected that the participation of these companies will make Azerbaijan an important logistics and distribution center between Europe and Asia, and increase the competitiveness of the route it passes through.

Director General Taleh Ziyadov said: “Baku Port, which has an important geographical location between Europe and Asia, continues to attract leading European companies to the Middle East. The Memorandum of Understanding signed with the Rail Cargo Group will increase the competitiveness of the Middle Corridor and provide Azerbaijan with the leading European destinations.”

Thomas Kargl, a member of the Rail Cargo Group’s Board of Directors, said that in October 2019, a test drive from Xi’an reached the Czech Republic in 18 days. “In this regard, the Middle Corridor is quite competitive. As Rail Cargo Group, in the first half of 2020, with the agreement reached with the Baku Port, we will now ship the first test train from Venlo to the Netherlands, with the passing of the Baku Port. We believe that there will be a regular flow of freight from Europe to China and vice versa. ”

Also, following the meeting of the Working Group established for the implementation of the project “Promotion of green ports and connectivity in the Caspian Sea”, a protocol on further steps to be taken by the Rail Cargo Group was adopted.

The Rail Cargo Group, a subsidiary of Austria’s Federal Railways (SCB), has over 8,500 employees worldwide. The company has an annual turnover of 2.3 billion euros and carries around 130 million tons of goods a year.