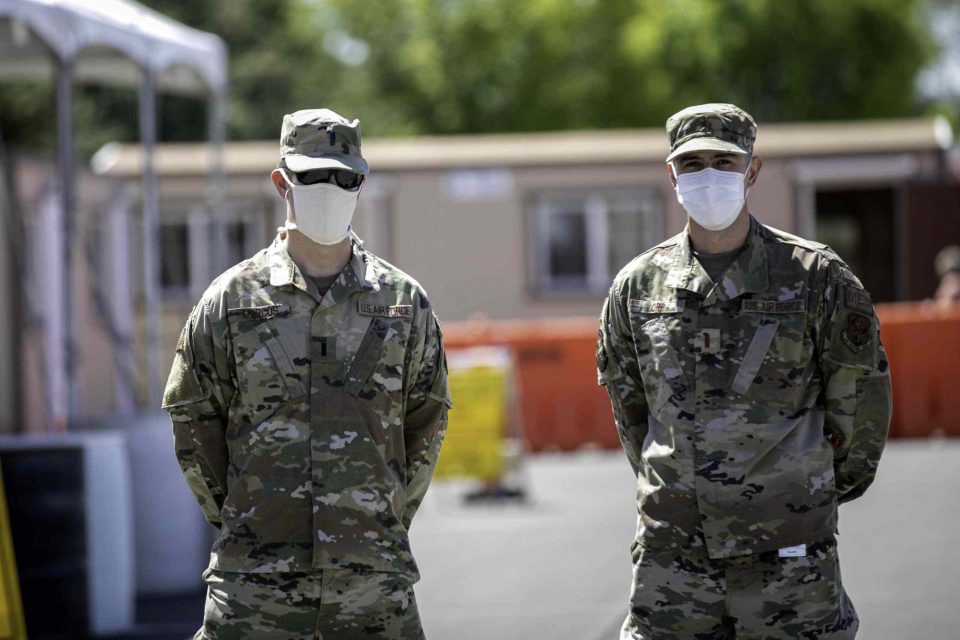 At the Washoe County and state level briefings today, health officials greeted Nevadans with a flurry of good news–and some cautions.

After a patient, six months-long effort by Nevadans the mitigation efforts seem to be yielding positive results. According to the COVID risk meter and standards set by state officials, Nevada’s disease scenario has come down from the high-risk orange zone to moderately high-risk yellow zone.

“We are pretty excited that we have gone from orange to yellow,” said Dr. Eric Z. Nielsen, a member of Northern Nevada Emergency Physicians, at the Washoe County Health District’s press briefing.  “Most of that is driven by our test positivity (rate) getting to 7%. This is a big milestone. We have really been stuck in orange for what seems like, you know, months.

“And this is good progress, especially with the opening of schools. This is something we can follow, really stay in yellow, keep the hospitals empty and make sure we are still testing enough and when the test positivity goes down…That’s a good sign…This hopefully will be a milestone,” he said.

District health officer Kevin Dick recognized the mitigation success to be a result of community efforts. “It’s important that we continue in those efforts,” he said.

Mitigation efforts must not let up

Dick also had words of caution for people of Washoe County. “We expect to see if there are impacts from the Labor Day gatherings” that may show up in the next week or two, he said.

“We also are going to be reopening bars in Washoe County. So that may have some impacts for us as well. And we have had a large political rally not too far from here over the weekend, so, these are all factors that could impact us in the coming weeks…We need to continue to work hard trying to prevent the spread of the disease and watch what impacts from those may be.”

Why can’t Washoe county relax yet?

Precautions to be taken when in the yellow

According to Jeremy Smith, executive director of the Truckee Meadows Regional Planning Agency, “This is still high moderate, and what that really means is that there is still some risk of community spread. Our behavioral guidelines for yellow still recommend that folks continue to wear masks in public. And of course, respect all the rules… remember to wash your hands and social distance… Keep those masks on.”

Fall is upon us and so is Flu Season. Experts say the seasonal flu can show similar symptoms in an infected person as COVID-19 making it hard for health officials to quickly detect the actual disease. Health officials warned that the timing is crucial, “especially going forward into the fall. We will see how things shake out next week or so with the potential Labor Day bomb,” said Nielsen.

“Yesterday, I think we had 42 cases in Washoe County–that’s 8 or 9 days after the Labor Day weekend. If we can get through this scary stretch of major holiday weekend without a big bomb we had with 4th of July and Memorial Day this will be like a milestone going into the next phase,” Nielsen added.

Not all disease metrics are met

Dick explained that Washoe County is doing better on two of the three main criteria for tracking elevated disease transmission.

The positivity rate is now 7%; “We have now met that criteria,” Dick said.

The case rate over a 30 days period is still higher than desirable. It is 278.2 cases per 100,000 over a 30-day period, and the threshold for that is 200. “That indicates we still do have a high number of cases occurring in Washoe County,” Dick explained.

Mentioning the 150 COVID deaths that happened yesterday, Dick noted that as a health official he remains cautious. “We do still have significant levels of disease in the community. Our daily average case count over the last seven days is 57 new cases per day. So, while it’s good that we are in the yellow range, people need to be aware that there’s still plenty of COVID-19 in our community and it’s very important to continue with the precautions that we have emphasized.”

“We have 135 cases reported between students and staff on their website and we are aware of 66 new cases that occurred just in the last week,” said Dick. “We are hearing of a lot of off-campus parties that are occurring where individuals aren’t wearing masks and we know that those are sources of transmission that are occurring throughout. We continue to see outbreaks happening from private gathering, so it’s very important that the students follow the directions they are receiving from the university.”

Dick also announced that bars in Washoe County will be reopening no later than 11:59 p.m. tonight.

During the state media briefing, which happened in a close timeline to the county briefing, Gov. Sisolak said, “Our COVID-19 numbers in the state are trending in the right direction.”

He also let Nevadans know that Nevada recently dropped off the travel advisory list with states in the east such as New York, New Jersey and Connecticut and he appreciated the progress.

He thanked “true” Nevadans for their efforts. “Let me be very clear: this did not happen by chance. It is by the hard work and sacrifices the true Nevadans made and are continuing to make to help prevent the spread of COVID-19 that this has become possible.”

He also reminded people that the struggle is ongoing. “Over the period of the last six months we have learned that we cannot let our guard down now. This is the time we must be more committed than ever to protecting each other and our economy.

“As a reminder, the statewide standards of the mitigation measures everyone and every county must follow regardless of whether they are listed as ‘high risk’ or not.

“Specifically, I have asked this [Nevada health] group to review our current statewide capacity and gathering limits, see how we can make adjustments that are Nevada-specific and tailored for the economic and social activities in our state. Once this is developed, it could impact everything from church gatherings to business meetings,” he said.

Numbers at a glance

According to the Nevada Hospital Association, in Washoe County as of September 16:

Washington preparing for vaccine distribution, as CDC director warns mass availability will not be until spring or summer

Are motor carriers being eclipsed by freight visibility?

Why focusing on ‘rural development’ is a must

Opposition must be treated as integral part, says Rehman Sobhan

The prop trading that got away

The impact of Brexit on air pollution