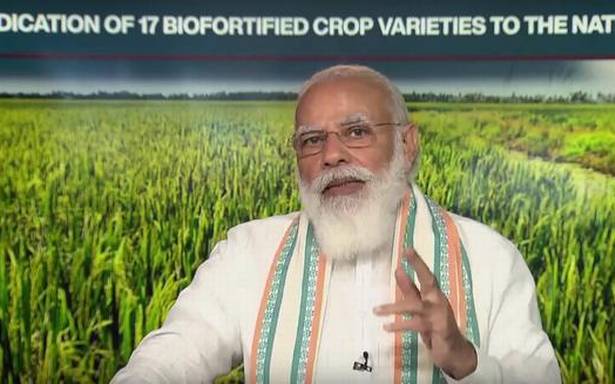 The Prime Minister released a commemorative coin on the 75th anniversary of the Food and Agriculture Organization (FAO).

Prime Minister Narendra Modi reiterated his support for minimum support prices and government procurement of crops, at a time when farmers are protesting against agricultural reforms that they say endangers this existing system.

Speaking at a virtual event to commemorate the 75th anniversary of the Food and Agriculture Organisation, Mr. Modi also said the government would soon take a decision on the revising the minimum age of marriage for women.

“MSP and government procurement are an important part of the country’s food security. Therefore, it is important that it should continue to function with better facilities and scientific management. We are committed to this,” said the Prime Minister.

With regard to the Agriculture Produce Market Committee (APMC) mandis, he said that system has its own identity and strength.

Earlier this week, Punjab farmer unions walked out of talks with the Agriculture Ministry, vowing to continue their protests and rail blockade against the reforms. They say the recent three laws passed by Parliament last month will weaken the APMC system, and ultimately lead to the phasing out of government procurement at MSP rates while encouraging corporate buyers who will purchase produce at lower rates.

In his speech, the Prime Minister emphasised the government’s view that the reforms would increase farmers’ income. “Small farmers used to sell their produce to middlemen earlier due to lack of access to the mandis. Now, the market itself will reach their doorsteps,” he said. “Every type of protection to the farmer has been ensured through these reforms. When the Indian farmer is empowered, his income will increase, and the campaign against malnutrition will also gain equal strength.”

The Prime Minister also listed lack of education and early pregnancy of girls among the hurdles in the fight against malnutrition. He noted that the gross enrolment ratio of girls has become higher than boys for the first time. Child marriage is among the reasons that girls drop out of school in higher classes, he said.

Noting that he gets letters from young women across the country asking why the committee’s report has not come yet, the PM said, “I assure all those daughters that the government will take action on the report very soon.”

Consumer Demand for Eco-friendly Products Set to Boost the Prospects of the Bill of Material Management Software Market 2016 –...