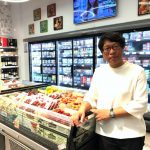 The Paris Store in Macau has opened its doors to the public to provide local residents a range of French products and produce.

Since the demand for quality products are getting higher in Macau, Chu decided to open the city’s first French supermarket that features a wide range of French products.

Opening its first store in Taipa in April 2018, Paris Store continued to expand by opening its next two stores in Horta e Costa and by Rua do Campo in January and May 2019, respectively.

To ensure freshness, the company imports fresh fruits, vegetables and dairy products from France weekly, with a shelf life of only two to three weeks. These fresh foods are more popular in the market, but the cost of air transportation is higher.

According to Chu, 90% of her products are made in France, and the rest are mainly from other European countries including Italy, Spain, the Netherlands, and Belgium, among others.

Over 80% of the products are being imported to the SAR for the first time.

“We were thinking of bringing in something directly from France that is healthy, traditional and trendy,” said Chu.

Paris Store kicked off its collaboration with Sands China in February 2019, and is currently supplying fresh fruits, vegetables and yogurt.

“A [Sands China] chef came over and found good quality products for his restaurant. When he found some produce that matched his expectations, he recommended us to Sands China’s procurement team and our collaboration started,” said the executive director. “Since then our sales turnover increased 20% in terms of our overall business,” she added.

She recalled that at the beginning of their collaboration, the white fungus that was being supplied to Sands China was the standard retail packaging of only 250 grams, while the restaurant required a much larger portion each time. Through continual and effective communication, Paris Store came to understand the restaurant’s needs and managed to import white fungus in a larger package, which is also more environmentally friendly, in line with Sands China’s Sands ECO360 global sustainability strategy.

Recently, Chu participated in the Sands Procurement Academy, where Sands China shares business knowledge and skills to further the development of local SMEs.

For Chu, the eight modules that were provided throughout the course have, for example, helped improve the firm’s warehouse operations and logistics management.

“We’re thankful to Sands China for sharing their business and practical knowledge with us. We’ve gained experience and capacity for working with large-scale international corporations like Sands China and we’ve increased our knowledge of logistics and warehouse management,” said Chu.

“The Sands Procurement Academy provides eight modules in total. We learned a lot on how to manage our warehouse effectively, and increased our awareness of quality assurance and Sands China’s related procurement contracts and requirements,” she added.

The Sands Procurement Academy was the first such programme in Macau for local SME suppliers, and has graduated six cohorts to date, comprising nearly 180 representatives from local SMEs.

“I can recall that one of the most important modules for me was where a professor lectured us on how to avoid failures in business. That was a really helpful topic, since it has increased our awareness of our strategy and the market conditions,” said Chu.

Currently, Paris Store is hoping to increase its partnership with Sands China by presenting business proposals that would benefit both parties.

The Sands Procurement Academy and the company’s invitational matching sessions are part of Sands China’s F.I.T. programme, which offers Financial Support, Invitational Matching, and Training and Development. Aimed at both existing and new local Sands China suppliers, F.I.T. is part of Sands China’s Local Small, Medium and Micro Suppliers Support Programme, and seeks to continually increase and strengthen procurement between Sands China and local SME suppliers by enhancing their capabilities.

Govt slashes salary of college contractual lecturers by over 47 percent