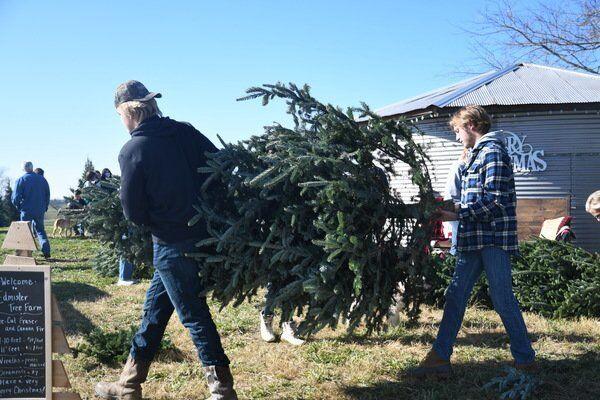 For many American shoppers, Black Friday is a tradition of late night, early morning shopping and tons of deals on holiday gifts.

But for the Edmister family, they are beginning to form their own day-after-Thanksgiving tradition.

On Friday at noon, the family-of-seven opened for business and began to sell Christmas trees at the Edmister Tree Farm for Madison County families gearing up for Christmas.

And although it was their second year in business, it has been a lifelong dream for Skye Edmister.

Having been raised on a farm throughout his life, Edmister has helped cultivate next to everything — including diary, livestock and grain.

Now he, and his wife, Hannah, along with their five children are dipping their toes into a new agricultural niche, selling Christmas trees.

For Edmister, having a tree farm had always been a dream cultivated by a deep love of Christmas, instilled in him my his own mother.

“I have always been a huge Christmas fan,” he said on his five-acre farm. “My mom kind of bred that into me.”

And unlike others who typically use a fake tree, Edmister has only celebrated with real fur trees, which contributed to his passion for a tree farm.

Flash forward to 2015, Edmister and his then family-of-five, moved to Richmond and were looking for a tree of their own to celebrate Christmas.

They found themselves at Baldwin Farms off Tates Creek Road, and in conversations with owner Margery Baldwin, Edmister again spoke up about his dream of owning his own tree farm.

“She said ‘Whenever you decide to start, come to me and I will tell you everything I know.’ She gave me a list of her suppliers and everything,” Edmister recalled.

In the years that followed, the family returned for trees until Edmister heard the news Baldwin Farms would be in their last year of tree sales.

So, in 2019, just three weeks before Thanksgiving, Edmister contacted Baldwin to ask if she was not going to sell trees and stated he had the notion to gather a bunch of pre-cuts last minute to give the community some sort of tree-picking experience.

“She was incredible and so encouraging,” he said. “She said, ‘Whatever you do, let me know and I will put it all over my social media.’

“So I get home and get everyone around the table and printed out every tree wholesaler in Ohio, Virginia, West Virginia, Pennsylvania, North Carolina, Wisconsin and Missouri. I have all the kids on the phone calling people to ask, this one here was on the phone just, ‘Hey, do you have any trees left?’” He said of his son, Josh.

Out of all of those states, the family were able to find three places with trees left.

The family purchased trees from Nieman Tree Farm in Lexington, and placed the trees on their home farm with posts, so families could still come pick them out.

With little to no advertising, Edmister said the last-minute turnout was tremendous.

“It was an exceptional turnout, and that was pretty awesome,” he said. “We sold trees up to two days before Christmas. There was one, we weren’t open but it was pouring rain, 10:30 at night and he called needing a tree and came out and picked it up.”

After having a taste of his dream and a successful first year under his belt, the Edmister family is gearing up for their second season of tree farming.

With only saplings planted thus far for upcoming seasons, the family purchased 200 pre-cut trees to post on the farm for families to choose from.

Edmister stated he was extremely limited in getting the 200 trees, as tree wholesaler options were slim because of a tree shortage.

“I began calling in July and because of the shortage, there were only three farms available then,” Edmister said.

Therefore, he and his wife traveled 650 miles to Pennsylvania to pickup Fraser Furs from Walker Tree Farms to bring home to Richmond.

The family is looking forward to another successful year in business and the interaction they will get with those in the community.

“We met a lot of great families,” Edmister said. “One of the funniest parts for me is walking through here with them and listening to them. You know sometimes the husband is just like, ‘Ugh, she drug me out here, let’s get this over with.’ And other times there are families like this one family of six, they all came in Cleveland Browns gear and were just a super cool family. Its just a good time.”

With no plans to slow down now, the Edmister family has planted saplings, and refurbished a grain bin for a transaction area — a Pinterest pin idea from Hannah — to grow their tree farm business.

“I am the dreamer, my wife is the realist, she has to dial me back sometimes,” he laughed. “But my goal is to have (acres of hills) covered in trees and bring people back to the family traditions of Christmas. That is what this is about for us.”

The Edmister Tree Farm is located at 200 Rowlette Drive in Richmond and are open Saturday and Sunday from noon until dark. Skye and his wife, Hannah, live there with their five children; Zoey, Allie, Josh, Briella, and Bekah and two dogs, Bosco and Sampson.