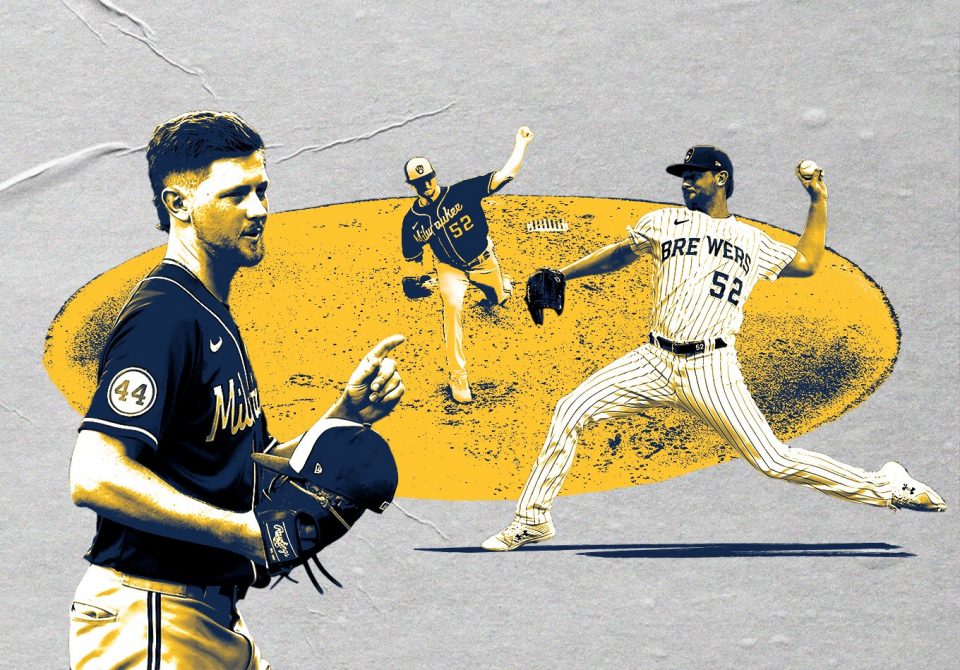 It’s clear, by now, that Milwaukee Brewers left-hander Eric Lauer is a man on a mission.

And perhaps the breakout star of the season so far.

His 1.82 ERA in 29.2 innings ranks among the best in the league, and it comes with lots of strikeouts – 42 to be precise – and a very encouraging statistical profile that suggests this version of Lauer has some staying power.

For starters, Lauer’s fielding-independent pitching (FIP) is 3.06 – more than a full run higher than his ERA, but still rock solid. He’s also throwing harder than last year, averaging 94.0 mph with his four-seam fastball. The increase is significant: He was throwing his heater at 92.6 mph on average in 2021.

He’s s also throwing fewer four-seamers and more cutters, which are also, by the way, coming in harder than last year.

Of course, the typical early season “small sample size” warning applies. But if you look closer, Lauer has been pitching at a really high level since the second half of 2021.

He cleaned up his mechanics prior to the 2021 campaign (with the intention of protecting his shoulder, which cost him most of 2020), and his arm action looks shorter and quicker than his early years. (Recent biomechanical data has suggested a shorter arm path can not only increase the chances of the pitcher staying healthy, but also has a great impact on how the pitches move.)

In applying this change, Lauer has unlocked more velocity while maintaining the impressive pitch movement profile he had achieved last year.

Basically, with more than a tick of increased velo, and excellent pitch movement on both plains, Lauer’s stuff is better – and that becomes evident looking at his whiff+. This particular metric helps us determine the rate at which a specific hurler generates swings and misses.

Last year, Lauer’s whiff+ was 105, or slightly above league average (100). This year? It’s at 145, a huge increase in comparison and enough to rank him in fourth in the majors among those who had faced at least 100 batters heading into Wednesday’s action. But that’s not all: Lauer is also above-average in the other components of pitching: strike+ (107) and command+ (104).

Strike+ tries to determine the rate at which a pitcher earn strikes, both called or swinging; while command+ analyzes the pitcher’s intent when he throws the ball; using count, pitch-type, trends, the location of the catcher’s mitt, his body position during the setup, and other factors and data.

Those three metrics are used to determine the pitcher’s raw value, or RV-. Instead of examining just the outcome of an at-bat, RV- evaluates every pitch. It’s a rate stat, so it assesses how pitchers perform relative to the league average (100 RV-).

Essentially, RV- evaluates whether a hurler is capable of generating weak contact, whether he can miss bats, or if he has the command to hit his spots and coax the hitter into making bad decisions. Lauer’s 2021 RV- was a solid 85, but this year, he’s 16th in MLB so far with a RV- of 66.

Pitching coaches and instructors in Milwaukee have certainly made a huge difference in the last couple of years with Lauer, helping him unlock a new level. He’s in the perfect organization to keep evolving and proving he belongs in the elite, one that already guided Corbin Burnes, Devin Williams, Josh Hader, Brandon Woodruff, Freddy Peralta, Aaron Ashby and several other hurlers to stardom.

How has he done it? Well, Lauer is using fewer four-seamers this year (35.6% vs. 44.3% last year) and more cutters (24.8% vs. 18.4% in 2021) – and both pitchers are faster and better overall. He also increased his slider and curveball usage and practically ditched the changeup.

Against right-handed hitters, he likes to work up and in with fastballs or down and away with all his pitches, changing the visual plane for the batter. The data says that he favors his four-seamer (29.7%) and cutter (29.7%) on the first pitch against righties, but there is a 24.8% chance he opens with a curveball. With two strikes, he will throw his trademark fastball about half of the time – again, either high or down and away.

While facing lefties, Lauer tries to attack them with low and away offerings, no matter the pitch. He really trusts his cutter against left-handed batters when behind in the count, throwing it 35.7% of the time in this situation. When ahead, however, he will try to retire them with his slider, which not only has a decent whiff+ at 100, but has a phenomenal minus-26 BIP+.

BIP+ tries to evaluate the damage hitters inflict once they make contact. In this particular case, they hardly do anything with Lauer’s slider. In contrast, they do seem to make things happen once they hit his fastball, as it has a 163 BIP+. He has allowed a couple of homers and a double with it, but it has missed so many bats that it’s a worthy tradeoff.

Overall, Lauer is missing bats like never before while maintaining above-average ability to command his stuff and gain strikes, either called or via whiff. You know Lauer has good stuff and trusts it when you see him boasting the second-lowest zone contact percentage in MLB (before Tuesday’s games) among pitchers with at least 20 innings, at 75.5%.

Most of his stuff gains, particularly with his cutter and slider, were achieved from 2020 to 2021. The pitch that has shown significant improvement this year, however, has been his four-seam fastball. It went to mediocre to very good in 2020-21, and from very good to elite in 2021-22.

Between his excellent fastball and his cutter-curveball-slider combo, hitters have a handful when facing Lauer. His refined mechanics led to increased velocity and improved stuff, and with his above-average command, he has the tools to keep pitching at a high level.

A Control Tower by Any Other Name

Here’s Why You Should Retain Cheesecake Factory (CAKE) Stock