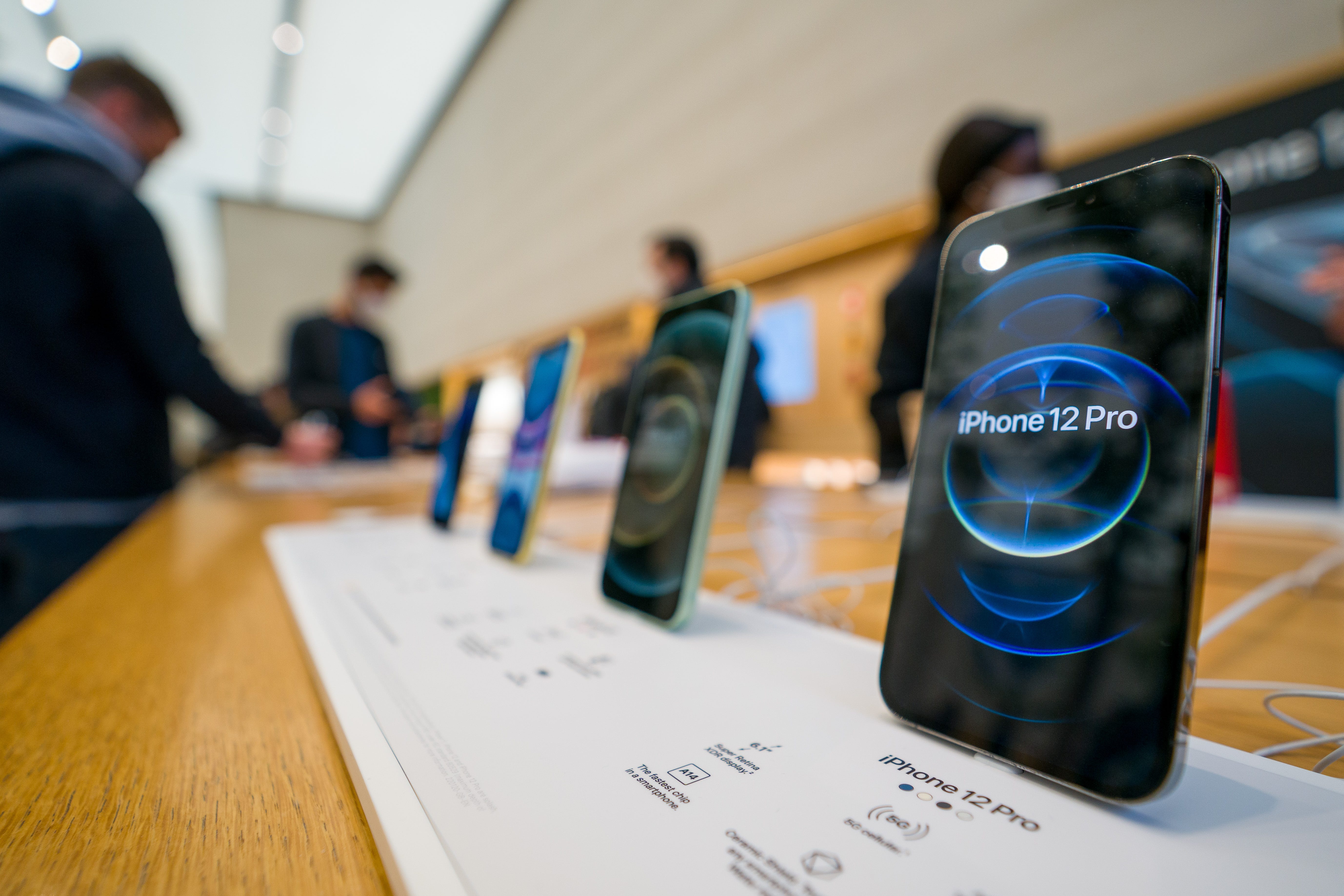 The new iPhone 12 and iPhone 12 Pro on display during launch day on October 23, 2020, in London, England. Apple’s latest 5G smartphones go on sale in the UK today. The iPhone 12 Mini and iPhone 12 Pro Max will be available from November 13. (Ming Yeung/Getty Images/TNS) (Photo: Ming Yeung, TNS)

The numbers suggest the world may finally be warming to 5G with its much faster download speeds and more reliable connections. After spending billions of dollars on new infrastructure, carriers have struggled to sell the costly handsets to consumers during an economic crisis.

They were hoping Apple’s late arrival to the 5G game would fire up demand, but it’s been an uncertain picture for the first few months.

“This update confirms continuing strong performance of Apple’s hardware line-up, still supported by the need to work from home and to learn from home,” said Bryan Garnier analyst Frederic Yoboue. “On top of that it shows that demand for the new iPhones is very buoyant.”

Asian countries including South Korea and China have moved fastest in rolling out full 5G services. U.S. phone companies are piling into the technology to sustain profits for the next decade and are racing to offer the broadest, most reliable network.

At an auction of the nation’s 5G airwaves on Monday, bids from carriers and pay-TV providers surged past $76.5 billion, crushing analyst estimates of $47 billion.

Demand for 5G gear was not a given after several years of sluggish handset sales that plateaued at around 1.5 billion units in 2019, according to data compiled by Gartner. That’s partly because high-end phones have become more expensive: Google, Samsung and Apple have all rolled out several devices costing more than $1,000.

Europe’s less profitable phone industry has avoided a headlong plunge into 5G, wary of rolling out expensive services that consumers won’t be ready to pay for. That’s left a region that pioneered wireless mobile phones lagging the world in the latest technology, with many countries still lacking full 4G services. In much of the region, 5G signals disappear beyond the limits of big cities.

If European consumers joined the 5G phone rush, it would give a short-term boost to the profits of carriers that make a chunk of their earnings from handset sales, and encourage them to spend more to close gaps in 5G national coverage.

Apple’s 5G push has been complicated by a shortage of vital chips that manage power consumption in iPhones and other devices.

That’s done little to dent long-term optimism over a technology that allows near-instantaneous video downloads and heralds a wealth of industrial applications from self-driving cars to remote surgery and connected factories. 5G is expected to generate $1.15 trillion in revenue by 2025, according to forecasts from the GSMA, an industry body.

“We expect strong consumer demand to continue to filter deeper into the supply chain,” said Andrew Gardiner, analyst at Barclays.

How can AI help your supply chain?