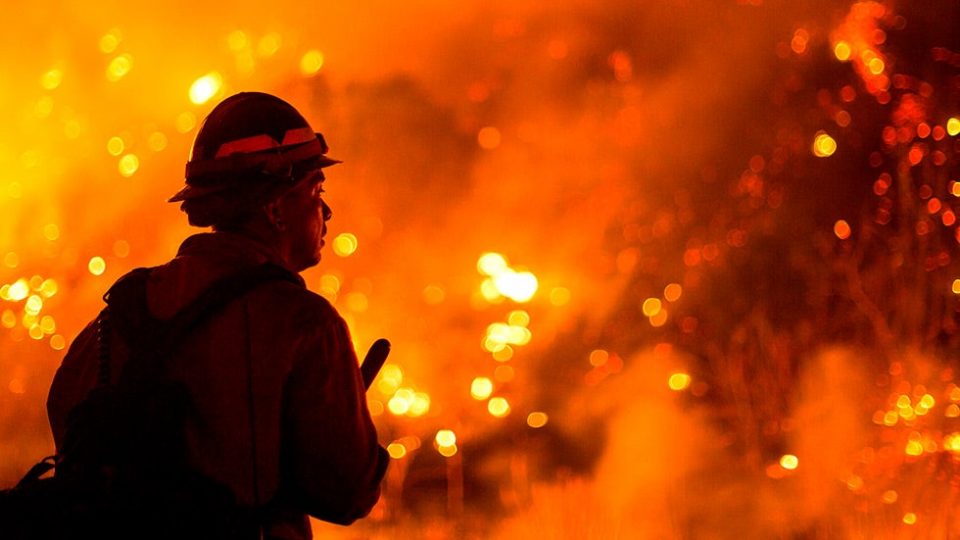 Wildfires have burned 5 million acres across the West, and scientists are running out of names for all the tropical storms and hurricanes battering the South.

But even the intensity and frequency of those natural disasters are showing little sign of moving the needle on climate change with voters or lawmakers, despite increased attention on the issue.

The destructive nature of wildfire and hurricane cycles have been exacerbated by climate change, with fires and storms causing significantly more damage early on in seasons that typically extend into fall.

But the distance between Democratic and Republican lawmakers keeps climate change legislation from progressing through Congress, restrained in part by an electorate that consistently prioritizes other issues.

“It’s hard to build sustained political action over things that are episodic,” said Elaine Kamarck, a senior fellow at the Brookings Institution who has studied the challenges of addressing climate change.

“What we’re missing here is the notion of a tipping point. We don’t know if there is a tipping point. Is there going to be some point where we’re all gonna burn up or floods sweep us all away? Or will it just happen unrelentingly, which seems to be what is happening, but in different parts of the world with different people at different times?”

Two-thirds of Americans surveyed by the Pew Research Center in June said the government isn’t doing enough to address climate change. But a similar poll released in August showed only 42 percent of voters ranked climate change as very important to them, leaving the topic 11th on their priority list behind health care and the economy.

The low level of voter interest has contributed to political gridlock when it comes to dealing with climate legislation.

The issue was recently thrust into the presidential campaign, with Democratic nominee Joe Biden

About an hour later, Trump denied the effect climate change was having on California’s fires.

“It’ll start getting cooler, you just watch,” Trump told the head of California’s Natural Resources Agency, who moments earlier had warned against ignoring science that shows the relationship between climate change and worsening wildfires.

The back-to-back comments from Biden and Trump underscore the political reality that has kept climate change legislation from passing Congress.

Chuck SchumerMcConnell accuses Democrats of sowing division by ‘downplaying progress’ on election security Warren, Schumer introduce plan for next president to cancel ,000 in student debt Schumer lashes out at Trump over ‘blue states’ remark: ‘What a disgrace’ MORE (D-N.Y.) mocked Trump’s comment this week criticizing him for saying the planet would cool “without a shred of evidence or knowledge.”

“You would think the situation would be better here in Congress, but, regrettably, the Republican Senate doesn’t seem to take the threat of climate change seriously either. The Republican majority has had six years in charge of the Senate to show that they want to make progress on climate change but have done next to nothing — next to nothing — to curb emissions or protect our environment from the damaging effects of a warming planet,” Schumer said on the floor Tuesday.

If there is any movement on climate change during the lame duck session, it won’t be on a sweeping climate proposal but instead on legislation that provides millions of dollars for research and development into all types of energy production, including cleaner forms of energy.

House lawmakers unveiled such a climate-focused energy package this week, and it looks more likely there could be action on a similar bill in the Senate in February, largely through the efforts of Sen. Lisa Murkowski

“Republicans have a lot more confidence in technology to address the problem of climate change than clamping down on the economy with something like the Green New Deal that drives utility rates up and eliminates jobs,” Senate Majority Leader Mitch McConnell

Perhaps the only other bill with a chance of making its way through Congress before 2021 is a forest management package from Sens. Dianne Feinstein

Dianne Emiel FeinsteinSenators offer disaster tax relief bill Democrats back away from quick reversal of Trump tax cuts Congress must save the Postal Service from collapse — our economy depends on it MORE (D-Calif.) and Steve Daines

Democrats have argued they will need control of Congress and the White House to make any of their more ambitious visions a reality.

And polling over the years has found that wildfires and hurricanes have an inconsistent effect on voter perceptions about climate change, with concerns sometimes ticking up but sometimes ticking down after major natural disasters.

“It has been a peculiar aspect of this policy debate that even as more and more people stop denying and understand that climate change is real and catastrophic and perhaps existential, there is this feeling that, ‘Gee we can’t do anything about it,’” Kamarck said.

But she believes that attitudes will shift as younger voters with a stronger grasp of climate change science and a more global perspective begin to fill a larger portion of the electorate.

“One of the fundamental rules of politics is you can’t ask people to give up something today for something that may or may not happen to you tomorrow,” Kamarck said.

“Young is not static,” she said. “The younger generation, as they grow into ages where they vote a lot, this will be a more important issue than it has been now.”

Election called and government is off the blocks