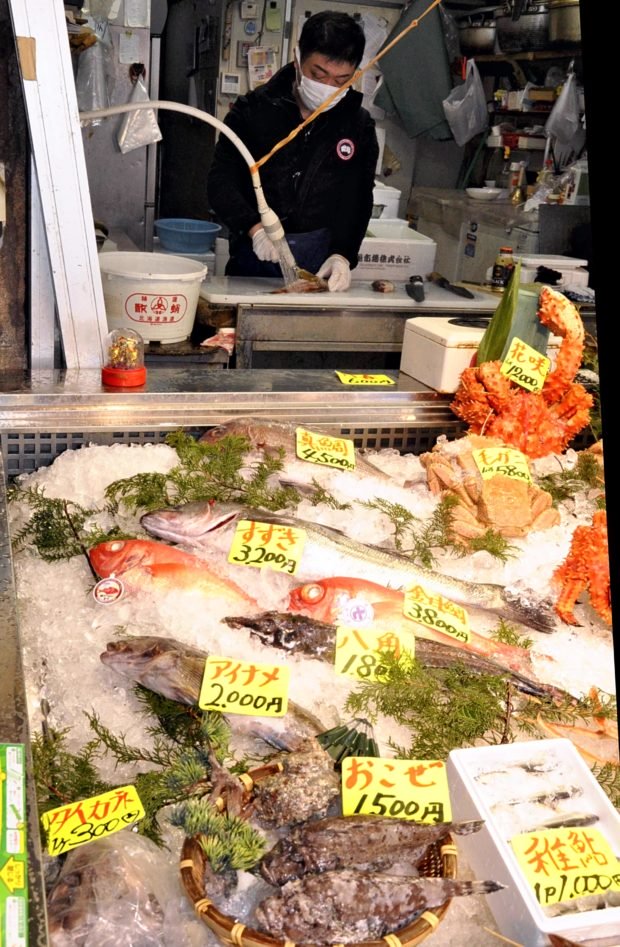 TOKYO — Due to the spread of the new coronavirus, prices of luxury foods such as wagyu beef and bluefin tuna are falling. This is because the number of foreign visitors to Japan has plummeted, and people have refrained from holding parties, meaning they are dining out less. People are spending more time at home due to school closures and telecommuting, and consumers are also buying more nonperishable products.

At a high-class yakiniku restaurant that offers Yonezawa beef in the Ginza district of Tokyo, the number of Chinese tourists or customers holding business dinners has decreased since late February, leading to sales of half the normal levels some days. “[Recently] most of our customers are friends or couples, and there are not many groups. Not a single Chinese customer has come,” an official of the restaurant said.

The restaurant industry is facing a setback. Kisoji Co., a company that operates a restaurant chain offering wagyu, has received a number of cancellations in March, the season for welcome and farewell parties in Japan.

The average wholesale price of A4 rank high-grade beef at the Tokyo Meat Market in late February was ¥2,026 per kilogram, about 19% lower than the same period last year. In addition, low demand for hot-pot dishes due to a mild winter also had an effect on the price.

At the Toyosu wholesale food market in Tokyo, the wholesale price of bluefin tuna from February 21-27 was ¥4,134 per kilogram, down 27% from the central price range in the same period last year. High quality bluefin tuna usually costs around ¥20,000 per kilogram, but this year it is half the price. Expensive seafood, such as Nodoguro blackthroat seaperch and sea urchin are also 20% to 30% cheaper, and a wholesaler at Toyosu lamented that “customers won’t buy items no matter how cheaply we price them.”

Wholesale prices of premium melons fell 18% and strawberries were down 25% in the central price range, at the Central Wholesale Market in Tokyo. “Demand [for fruits] for desserts at hotels and other places has declined significantly,” a wholesaler said. The Imperial Hotel in Tokyo has stopped serving buffet-style breakfasts, including fruit, since Tuesday.

While demand for luxury foods is falling, demand for instant products such as frozen foods, packaged dried noodles and retort pouch foods is growing.

At Inageya Corp., a supermarket chain that operates mainly in the Tokyo metropolitan area, frozen food sales in the three days from March 1 were 1.7 times higher than in the same period last year. Sales of packaged dried noodles such as ramen and yakisoba were 1.8 times higher, retort pouch foods were up 1.6 times, and instant noodles were 1.2 times higher. “Customers are buying foods that are easy to cook,” an official of the company said.

The amount of rice sold by the company has also more than doubled. Discounting was suspended from Wednesday in order to prevent excessive purchases.

According to the Agriculture, Forestry and Fisheries Ministry, wholesalers’ stocks of rice totaled 2.95 million tons as of the end of January. “We hope consumers will act calmly as there is sufficient rice to supply,” an official said.


For more information about the novel coronavirus click here.