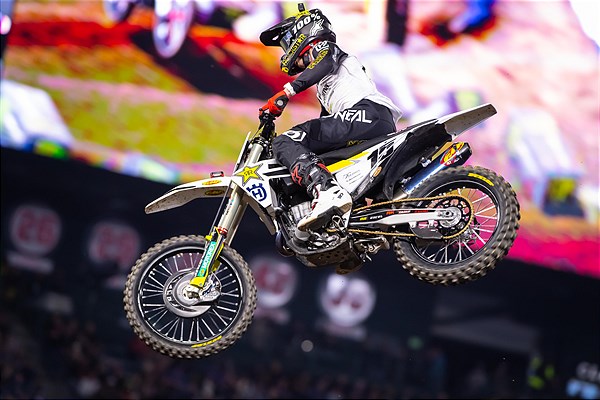 A good day for the Rockstar Energy Husqvarna Factory Racing team that of Anaheim II, California, with Zach Osborne and Jason Anderson who concluded with the shooting podium bringing back a couple of solid top 5 in the premier class, the 450SX. 250SX West team driver Michael Mosiman also took fourth place in this third round of the 2020 AMA Supercross world championship.

450SX
Zach Osborne started the day slowly, struggling to find speed in qualifying and in the qualifying heats. Here, he started in the top 5 and was quickly overtaken, settling in eighth position and reaching the final with the last useful place, the ninth at the finish. The final then saw him transform, with a good start and a first lap closed in third place. Dropped to sixth place, he returned to the top 5 shortly after the halfway point, before attacking and rising to fourth position, just 10 seconds from the winner.

“It was a positive evening,” said Osborne. “I struggled all day to find the rhythm, but I managed it in the final. I went up a little bit in the championship standings, so that’s okay and we’ll keep pushing: I think the podiums and the victories will come, it only takes time to find the right speed. ”

Jason Anderson, who qualified with the fifth time, started his qualifying heats in fifth place, going up to third almost immediately. He then held the position for all eight laps, thus qualifying for the final. Here he started sixth, taking third place on the fifth lap. While struggling with Cooper Webb, Anderson ended up off the track, leaving another driver free way and going down to fifth position. Continuing to fight to the finish, he finished fifth in the evening.

“The weekend went well, but I felt subdued all day,” said Anderson. “I tried to make something happen in the final: I went up to third place, but then I went down again sixth and at the end fifth, so I’m not too bad in view of the next weekend.”

Dean Wilson started his day big with the fourth fastest time in qualifying. He maintained the momentum in his qualifying heats, after which he started third and always remained in the top 3. With a good choice of gate for the final, Wilson started in the ten, closing the first lap eighth. He continued to fight for all 24 laps of the race, always finishing in the top 10.

“I would say there has been an improvement today,” said Wilson. “I just have to try to improve myself with each race. In the final laps of the final I felt that I was missing the condition, but overall I am quite satisfied with my starts and how I ran. ”

250SX West
In his 250SX West qualifying round, Michael Mosiman had a great start, winning the holeshot and taking command of the race. While he was second, Mosiman fell, ending up forced to run the Last Chance after missing the qualification for one position. In the Last Chance Mosiman started second and then took the lead, winning the victory and the final. Here Michael made good use of his side position at the gate, sprinting in the top 10. From here on he made his way among the opponents, arriving at shooting distance from the top 5 in the last laps. Two laps from the end, Mosiman kept his mind cool exploiting the mistakes of his opponents to recover two more positions and finish fourth at the finish.

“The final was frantic and chaotic, for many it was a struggle for survival,” said Mosiman. “I always started well tonight, and I think I deserved more than a fourth place as I drove. But that’s okay, now let’s look at the next race. ”

Next race: January 26, Glendale SX at the State Farm Stadium in Glendale, Arizona.

Watch Now: You can win a candy factory in this nationwide treasure hunt – GoDanRiver.com

Is Fayetteville ever getting a Trader Joe’s or Cheesecake Factory?