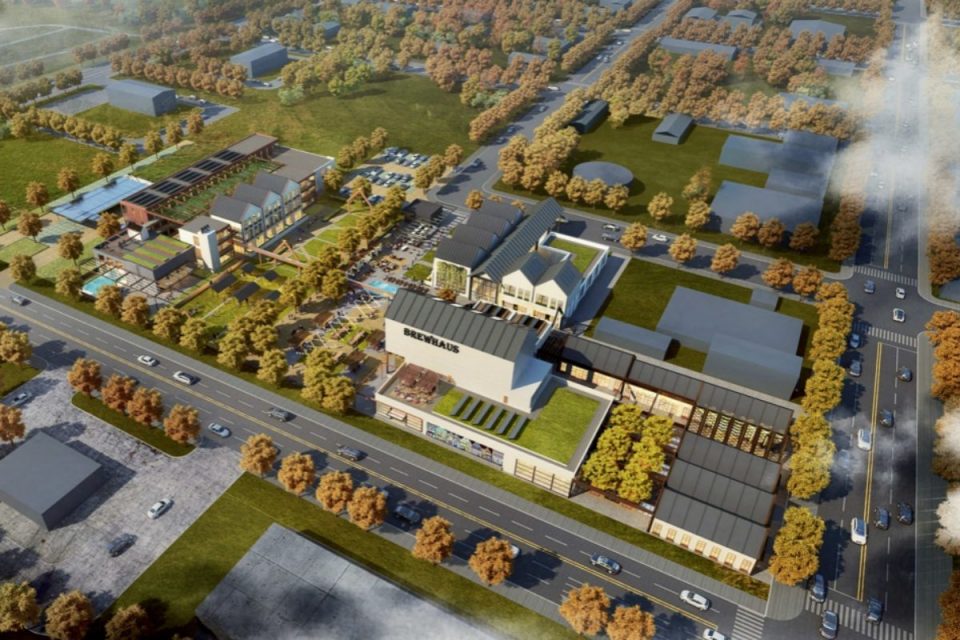 The hamlet of Muenster, Texas is about an hour and 20 minutes from Dallas and Fort Worth – nearly equidistant from both. Although the town, with its Germanic vibe, seems a bit out of place in North Texas, its population (around 1600 total) has thoroughly embraced it. Most shops display the “willkommen” sign ― everybody’s welcome in Muenster.

Muenster’s most famous offing has to be Fischer’s Meat Market, the third generation butcher and purveyor of German style cured meats, sausages and imports. Fischer’s is just shy of the century mark, having opened in 1927. For many years, Fischer’s has been one of the top day trips from Dallas.

Muenster’s annual Oktoberfest was held right on schedule this year, in early October, featuring beer and brats, and plenty of lederhosen and dirndl clad revelers. That European appeal is now drawing potential investment as well.

In fact, one of the board members of the Beverly Hills Chamber of Commerce has big plans for quiet, little Muenster. Llewyn Jobe grew up in Dallas, graduated from SMU, and his family has a ranch nearby so Muenster has always been on his radar.

“When I was driving to the ranch with my mother, I noticed the Cheese Factory for sale,” Llewyn Jobe tells PaperCity Fort Worth. “Muenster is a German town with fitting architecture.” Jobe, who is enamored with both the quality of life and the more relaxed pace of the German lifestyle, thinks with Muenster’s proximity to the metroplex, it could be even more alluring.

The Muenster Cheese Factory is rife with possibilities. Jobe is beginning phase two of a feasibility study now on its potential redevelopment. If all goes according to plan, Muenster’s Main Street could welcome a mixed-use mecca, including a brewery and a beer garden ― Muenster Brewing Company — along with townhomes for sale, more restaurants and even possibly a boutique hotel. Stay tuned for more details on that project as it develops.

Llewyn Jobe began his career in sales in the ultra-luxury import auto market nearly two decades ago, selling Rolls-Royces at Park Place in Dallas, before heading to Beverly Hills to do the same. He needed a day job to support his equestrian passions, as Llewyn was busy traveling and competing in the upper echelon of the Hunter/Jumper A Circuit. So he began selling Aston Martins on the side to fund his competitive aspirations, and 18 years later has found himself on top of the elite auto market.

His tenure at O’Gara Beverly Hills ended with a top ranking, and the title of general sales manager of this worldwide leader in the sales of elite autos such as Aston Martins, Bentleys, Bugattis, Koenigseggs, Lamborghinis, McLarens and Rolls-Royce Motor Cars.

Muenster Auto Haus will be opening on January 1 at 100 N. Main. He plans to specialize in buying, consigning, selling and trading German imports, classics and other exotic automobiles. He already has eager buyers lined up from all over the country.

While none of us knew exactly what the year 2020 had in store to hear Jobe tell it, “I woke up at the beginning of the year and  just knew life was going to change for me in 2020.” There wasn’t even an ounce of forbidding dread, rather for him it was all excitement and anticipation.

He has also launched a lifestyle brand this year, Lebensstil USA ― literally translated it means lifestyle or way of life. For Jobe that encompasses everything he does.

“It’s my live to work mentality,” he says. The focus of this umbrella brand will be far-reaching ― encompassing everything from fashion, fitness and film to philanthropy and farming, and from ranching and retail, to automotive, hospitality and development.

Lebensstill USA has one overarching theme as well. It’s all about “creating beauty, and living a lavish, healthy, outdoor lifestyle,”Jobe says. Lebensstill will ultimately touch on many of Jobe’s personal and ever-evolving passions along the way. The brand identity was created to house his companies “with a mindset that puts the enjoyment of life first.”

His website explains the brand this way: “Lebensstil USA is operated out of Beverly Hills with international partnerships in London and Melbourne. In Texas, Lebensstil USA is headquartered in Dallas, with its roots anchored in Forestburg, Muenster and Saint Jo.”

Last year Jobe took a world tour with his favorite stops occurring in Germany, London, and Melbourne, Australia. “I’d like to recreate that trip each year for inspiration,” he says.

Finally, Jetsam Distributors was born out of those travels. Jobe founded the web-based company in Beverly Hills this year. “We got our start importing Australian soy wax candles from surf-inspired candlemaker, Driftwood Goods,” he says. “We will be expanding in the near future with products collected from our journeys.”

As Llewyn Jobe continues his commute between Beverly Hills and Dallas, all eyes are on his potential redevelopment plans for Muenster Cheese Factory, and the high-end classic auto dealership he is planting there. His expansive lifestyle brand is just launching and one thing’s for sure. Whatever happens next is going to be interesting.