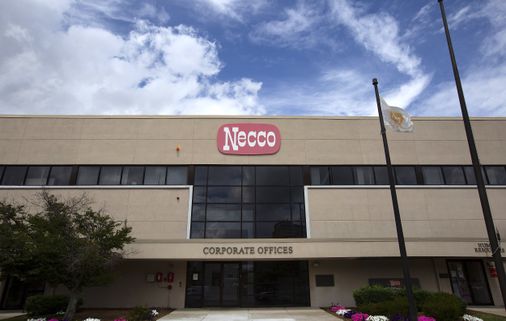 The owners of the former Necco candy factory in Revere have landed a sweet return for their investment.

Atlantic Management Inc. of Framingham and VMD Companies of North Andover have sold the former Necco complex, a 50-acre site that features an 830,000-square-foot industrial building, for $355 million to Clarion Partners LLC of New York. The Atlantic-VMD joint venture acquired the property in 2017 for $54.6 million.

The reason for the big return? Atlantic and VMD can thank Amazon. The Seattle-based tech powerhouse leased the entire building last fall, to turn it into a delivery station, the last stop before Amazon brings the goods to customers’ doorsteps.

The property became vacant when Necco closed abruptly in the summer of 2018 after about 15 years at the location, suddenly ending jobs for hundreds of workers. Necco’s Sweethearts, its namesake wafers, the Sky Bar, and other candy brands were sold off to various buyers.

Necco had been scaling back its operations by the time Atlantic and VMD bought the site, and Necco’s lease was due to end in August 2018. Revere officials worked with Atlantic and VMD to rezone the property, at 135 American Legion Highway, to allow for other industrial uses, including robotics and technology-related warehousing.

Necco had been the city’s largest private employer, so the closure was a particular blow to Revere. Mayor Brian Arrigo tried hard to find a new tenant for the site, even mentioning it in the city’s joint bid with Boston for Amazon’s second headquarters.

Amazon eventually picked Arlington, Va., for its HQ2 in late 2018, beating out the Suffolk Downs site pitched by Boston and Revere as well as a number of other finalists in other metro areas.

But last October, Arrigo was able to announce he landed Amazon, after all.

Amazon said it plans to employ hundreds of people at the property this year, and expects to invest $40 million into the site for renovations. This warehouse dwarfs Amazon’s other delivery stations in the state, in Everett, Milford, and Dedham.

“With execution of Amazon’s lease, this valuable asset is now being sold, in one of the most high profile transactions in the Boston metro area,” James L. Vitas, managing director of AMD, said in an email. “It is especially significant because of the jobs and vitality it brings to Revere.”