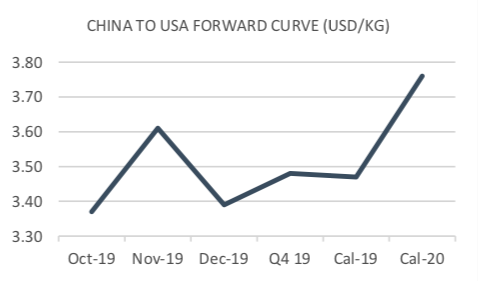 Double figure rate growth hits late into the season, just on the entrance into November. China to Europe continues its climb from the previous week gaining 21 cents, whilst China to USA finally establishes momentum gaining 20 cents.

Prices out of Shanghai continue to outpace Hong Kong, continually gaining since the beginning of October up to 14.8% (EU) and 10.86% (US). Hong Kong does however see a slightly surge in pricing, up 8.9/8.96% in both directions.

Front month pricing settles to establish the end of month prices of $2.73 and $3.37, however November prices appear to lay in the very late and long sought after peak season spike. China to USA gains 10 cents (whilst still far below 2018) whilst China to Europe continues its forward climb up 6 cents.

The first double digit growth of the year along both basket routes, and the Trans-pacific seasonal rate climb finally kicks into action. Alongside this rate growth, general optimism prices in Asian equities higher as the trade war appears to soften, despite poor fundamentals left over from damaging tariffs.

All the while Hong Kong has reportedly fallen into recession, as protests throttle the cross-border and domestic economy. Notably (and perhaps predictably, regardless of the protests in Hong Kong) volumes continue to spill off into origin points on the Chinese mainland. Shanghai continues to build its substantial air freight footprint.

Without a clear look into the actual freight rates from South East Asia, 2020 might well form a crucial juncture for the movement of economies either away from, or back into China. Volatility is exacerbated by a confusing political picture at a number of political and economic flash points. Brexit continues to be one of these, and in light of a deal struck for the UK to leave the European Union, all transport modes can expect a rush of ‘tariff-dodging’ shipments. In terms of freight rates, e-commerce shipments continue to spike and dump prices by up to 22% (Shanghai to London).

Borrowing a phrase from a freight forwarder earlier today, ‘predictions have become impossible’. However a market where the majority of freight businesses have been able to forecast the future accurately might well be a rarity in airfreight. Thankfully those who have hedged need not to worry about this eternal truth for much longer.

‘Airfreight routes (AGRs)’ provide us with tradeable routes in conjunction with baskets, by maximising volumes along regional tradelanes. AGRs calculate the average of several correlating arrival points noted by their airport codes