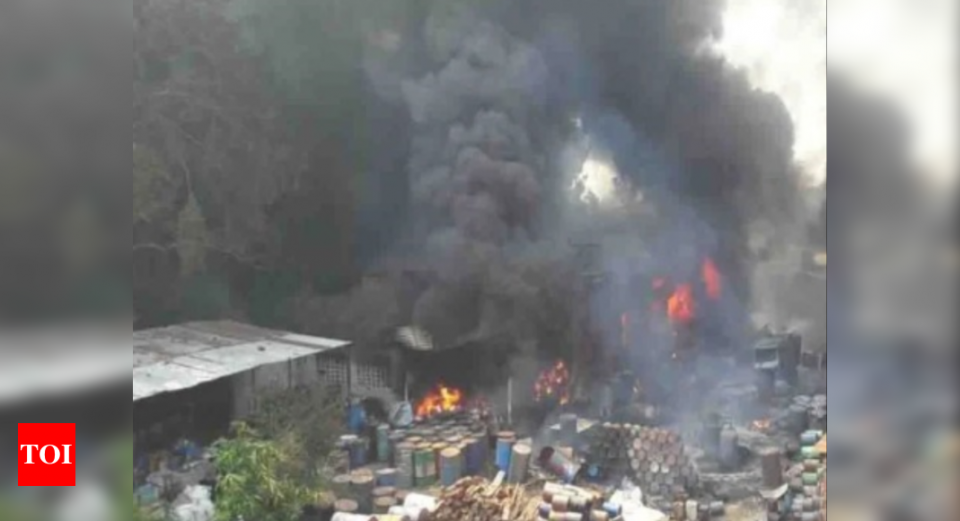 KANPUR: A major fire broke out at a paint factory at Pachor road in Mandhana area under the limits of Bithoor police station on Monday afternoon.
More than half-a-dozen fire tenders have been rushed to the spot to bring the flame under control. No casualties have been reported so far. Panic meanwhile prevailed and locals in nearby residential pockets evacuated their houses in a hurry as several loud explosions were heard and thick columns of smoke descended in the area.

Sources said a stray spark following a short circuit hit containers of inflammable chemicals at the paint factory, when the employees of the morning shift were to begin their duty, which may have triggered the blaze. Seeing the fire, several labourers rushed towards the factory’s exit gate to save their lives.
Senior administrative, police and fire department officials rushed to the spot. Sources said the major portion of the factory was destroyed and the losses could run into several lakhs.
The fire might have started due to short circuit, but the exact cause of fire will be ascertained after thorough investigation, SP rural Brijesh Kumar Srivastava said.
The fire officials said paints and chemicals stored in huge quantities in the factory fed the fire and made it difficult for fire-tenders to control it quickly.

Semiconductor manufacturing giant TSMC is planning to build a factory in Arizona: report

Twin Cities drama, set in a factory, makes a plea for compassion