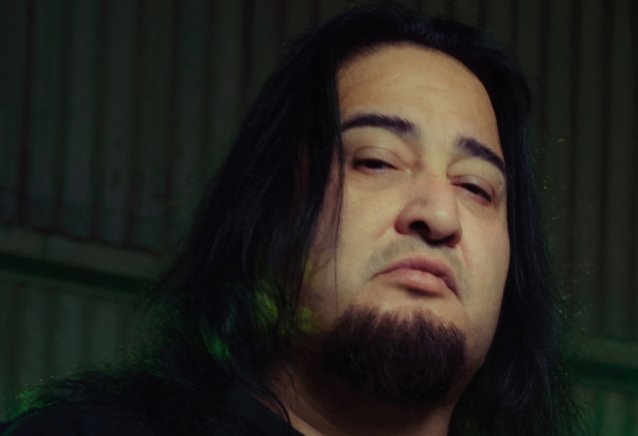 FEAR FACTORY guitarist Dino Cazares has issued a statement clarifying his reasons for launching a GoFundMe campaign to assist him with the production costs associated with the release of the band’s long-awaited new album.

Less than a day after Cazares announced the fundraising campaign on social media, FEAR FACTORY singer Burton C. Bell, who has fronted the group since its inception, posted a message on his official Facebook and Instagram saying that he is “not part of” and isn’t “benefiting” from any GoFundMe campaign. He added the hashtag “#fearfactory”. This has led to confusion among some of the FEAR FACTORY fans, especially since Dino had already indicated that Bell‘s lead vocals would be featured on the upcoming record.

In response to mounting questions regarding the exact purpose of the GoFundMe campaign, Cazares released the following statement earlier today:

“This is to address some of the controversy regarding the FEAR FACTORY GoFundMe page. It is not a scam. All donations go toward covering newly incurred production costs and not anyone’s personal legal fees.

“On the previous version of the album recording, which was completed in 2017, it had programmed drums. I decided to not make that mistake again and had Mike Heller perform live drums on the record. I later realized I needed to re-track guitars and bass to fit better with the live drums. I also decided to add new keyboards from Rhys Fulber and a few other keyboardists. Damien Rainaud took over production duties for all this, and Andy Sneap is also handling the mixing and mastering. They all did an amazing job on ‘Genexus’, and I decided to bring them back for the new album. Burton‘s lead vocals, which were also recorded in full in 2017, will remain on the new version of the album.

“FEAR FACTORY has exceeded its limit in borrowing money from the record company to complete the new version of the album. For this reason, and this reason only, a decision was made to ask for outside donations.”

FEAR FACTORY‘s fundraising campaign marks the first public activity from the band since it completed a 2016 U.S. headlining tour on which it performed its classic second album, “Demanufacture”, in its entirety.

In a November 2018 interview, Bell said that FEAR FACTORY had completed a new album tentatively titled “Monolith”. He also said that “legal technicalities” needed to be sorted out before the record could be released. The effort will mark the Californian band’s first collection of new music since 2015’s “Genexus” LP.

FEAR FACTORY was the subject of breakup rumors in May 2017 when the band’s former bassist-turned-guitarist Christian Olde Wolbers posted a since-deleted eulogy for FF on his Instagram. He wrote “RIP Fear Factory” and appended that post with the hashtag #GrownAssMenThatCantWorkOutShit.

To comment on a
BLABBERMOUTH.NET
story or review, you must be logged in to an active personal account on Facebook. Once you’re logged in, you will be able to comment. User comments or postings do not reflect the viewpoint of
BLABBERMOUTH.NET
and
BLABBERMOUTH.NET
does not endorse, or guarantee the accuracy of, any user comment. To report spam or any abusive, obscene, defamatory, racist, homophobic or threatening comments, or anything that may violate any applicable laws, use the “Report to Facebook” and “Mark as spam” links that appear next to the comments themselves. To do so, click the downward arrow on the top-right corner of the Facebook comment (the arrow is invisible until you roll over it) and select the appropriate action. You can also send an e-mail to blabbermouthinbox(@)gmail.com with pertinent details.
BLABBERMOUTH.NET
reserves the right to “hide” comments that may be considered offensive, illegal or inappropriate and to “ban” users that violate the site’s Terms Of Service. Hidden comments will still appear to the user and to the user’s Facebook friends. If a new comment is published from a “banned” user or contains a blacklisted word, this comment will automatically have limited visibility (the “banned” user’s comments will only be visible to the user and the user’s Facebook friends).

What is Sea Freight and Why Use It? | Logistics

Till August, 60-hour week for factory workers in Karnataka.

COVID-19’s impact on the dietary supplement supply chain: How good are your supplier relationships, your forecasting, and your credit?