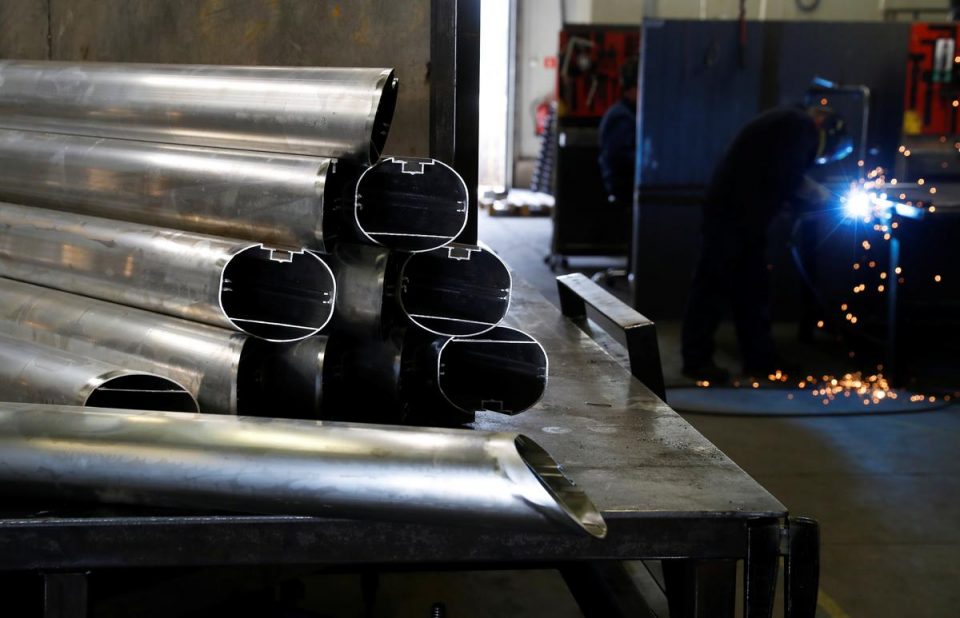 FILE PHOTO: A worker is seen welding the aluminium parts of goals at Interplastic, a Polish manufacturing company who are supplying the football goalposts for the 2018 World Cup finals in Russia, in Chwaszczyno, Poland, May 16, 2018. REUTERS/Kacper Pempel

Purchasing manager surveys released on Wednesday showed a large drop-off in March, with IHS Markit’s PMI in Poland hitting its lowest since April 2009 and, in the Czech Republic, the lowest since May 2009. [nL8N2BO4VW] [nL8N2BO4SV]

The first virus infections hit the European Union’s eastern wing on March 1 and the outbreak has quickly put the region in virtual lockdown like in western EU neighbours where the number of cases has been much higher.

The region’s lifeblood car factories have temporarily shut plants that employ tens of thousands, and many more indirectly through suppliers, to help combat the virus.

The ripple effect has put economies on course to contract this year, reversing strong growth and low unemployment achieved in the past few years.

Grzegorz Maliszewski, chief economist at Bank Millennium, said Polish data meant “it looks like we are back in Lehman Brothers collapse crisis times”.

The U.S. bank’s collapse in 2008 was a main spark of the global financial crisis that pushed Hungary and the Czech Republic into steep contractions in 2009.

Maliszewski said a 10% contraction in the second quarter was possible and estimated a full-year drop of 3% in Poland, the region’s biggest economy.

The Polish Labour Ministry forecast the jobless rate to rise to 9-10% this year, from 5.5% in February.

Governments in the region are stepping in. Poland has approved a 75 billion zloty ($17.97 billion) package aimed at supporting the economy and overall measures could be worth almost three times more, equal to a tenth of gross domestic product.

The Czech Republic had promised an initial 100 billion crowns ($4 billion) and another 900 billion in loan guarantees – almost a fifth of annual output in total. But business groups have criticised it for acting too slowly.

On Monday, it approved a short-time working scheme where the state will cover most of the salaries at companies hit by the outbreak, aiming to avoid mass layoffs.

The head of the Czech Chamber of Commerce, Vladimir Dlouhy, told Reuters on March 20 that the outbreak was a bigger threat to companies than the 2008-2009 crisis.

The government has initially forecast a 5% economic drop and is budgeting a five-fold increase in its 2020 deficit.

In Hungary, the Chamber of Commerce is calling for a 4 trillion forint ($12.05 billion) emergency fund. Prime Minister Viktor Orban’s government has promised help which it wants to unveil next week.

Hungary’s PMI nosedived to 29.1 in March from a revised 50.3 in February. New orders fell to a record low.

“Some have expected this crisis to be deeper than the financial crisis in 2008. This PMI also suggests that,” ING analyst Peter Virovacz said.

Reporting by Jason Hovet in Prague, Anna Wlodarczak-Semczuk in Warsaw and Marton Dunai in Budapest; editing by Nick Macfie

Solar industry installations in India to be impacted by Covid-19

Could Vietnam Be Ready To Fill China’s Supply Chain Gaps?