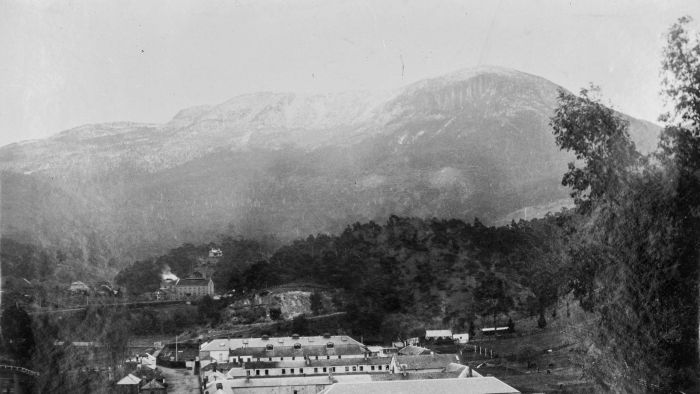 Beginning in 1803, over a period of 50 years, 12,500 women were transported to Tasmania as convicts. They were punished by spending time in female factories.

As transportation to Van Diemen’s land, as Tasmania was then known, ramped up in the 1820s, the colony’s jails were filling up.

When the Hobart Gaol became packed, a need for a new women’s facility was identified.

The government acquired a failed distillery in the shadow of Mount Wellington in South Hobart.

It became the Cascades Female Factory.

“It would have been a dreadful life, cold and bleak and miserable,” historian Dianne Snowden said.

Dr Snowden said it was a place of punishment — a place for women to be assigned work, and a place to give birth.

Until 1828, women were punished at the Hobart Town Female Factory within the Hobart Gaol on Murray Street.

It became overcrowded and unsuitable, with lots of escapes and men were able to see into the women’s quarters.

“More and more women were coming to Van Diemen’s Land,” she said.

“As the colonial population grew, the demand for female convict labour grew.”

When New South Wales stopped transportation, another 7,000 women arrived over the next 10 years — many were Irish.

Still, the ratio of men to women in the convict population was about seven to one.

The convict women were used as domestic servants in houses and on farms.

Those who misbehaved or became pregnant were sent to one of the state’s female factories.

The Cascades Female Factory started with one yard, but by the end of transportation this had grown to five.

“The women who were considered to be really bad were sent to George Town,” she said.

The Cascades site, in the shadow of the mountain and next to a rivulet, was less than idyllic for the inmates.

“It was a cold, dark place.

“In winter the days were very short. It wasn’t a pleasant place to be.”

Countless women and babies got sick, and illness would spread throughout the facility like wildlife.

“When the wind is howling down from the mountain it’s really icy,” she said.

“It would have been horrible.”

Probation on the Anson

Female convicts were generally hired out as servants, and expected to fend for themselves when it came to food and accommodation.

Well-behaved convicts could be assigned straight from the ship they came on, but others would wait at places like the Cascades Female Factory to be chosen by an employer.

From 1843 to 1849, women who arrived in Hobart were housed on another ship at Prince of Wales Bay on the River Derwent, called the Anson, as part of a probation program.

“After a voyage of three or four months, they got here and were taken from the convict ship and put on this converted naval hulk which could hold 500 women,” Dr Snowden said.

“They’d have to spend six months there before they could be assigned.”

Supposedly, it was so the women would not learn bad habits from convicts already living in the colony.

“They were being trained to be good servants,” Dr Snowden said.

Convicts who became pregnant in the colony were sent to the Female Factory to give birth.

Dr Snowden said once the child was born, the mother had to serve out six months of hard labour for getting pregnant.

“The man got off scot-free,” she said.

After nine months, the child was deemed to have been weaned and was taken to an orphan school.

Women living at the factory were punished with manual work, such as unpicking rope so it could be re-used.

Another was working at washtubs doing laundry for institutions and other settlers.

“When you think about it, that’s cold water in a stone tub, it would have been horrible,” Dr Snowden said.

Despite it being a bleak existence, some women sought out the factory as a place of refuge.

“It was a place they could be housed, fed, clothed,” Dr Snowden said.

“There was a large group who were in and out of the Female Factory all the time.”

For many, fending for themselves in the colony was hard.

“When they’d served their sentence and went out into the community, it was often very difficult for them, as it is with prisoners today,” Dr Snowden said.

When transportation stopped in 1853, the Cascades Female Factory was used by the government for other purposes until 1904.

It is now preserved and managed by the Port Arthur Historic Site Management Authority.

It is open to the public, but closed during the COVID-19 pandemic.

Is Your Supply Chain Ready For A Second Wave Of COVID-19?