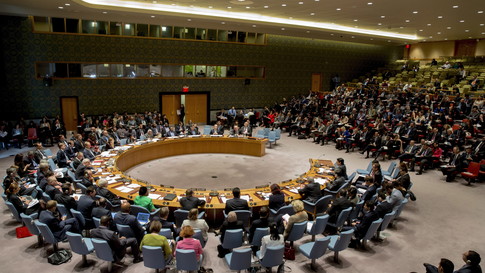 As the United Nations approaches its 75th anniversary, the impact of anthropogenic climate change is sweeping across our planet. The UN was built in the aftermath of World War II; a time profoundly different to our modern world. The five victory powers – the UK, France, Russia, the US and China – formed a body within the UN, dedicated to the the maintenance of international peace and security, whose consensus they agreed to abide by.

That body – the UN Security Council – still constitutes the legal backbone of UN efforts. As such, its five permanent members – the P5 – dominate the content of the council’s agenda. Today, 10 elected member states – the E10 – are also allowed to attend the council on a rotating basis every two years, bringing their own interests to the table.

Changes within the nature of conflict and the conflict with nature

The nature of conflict has changed in the 21st century. Developments in technology, the emergence of non-state actors and the social implications of globalization are altering the global policy regime at an accelerating pace. Since the start of the second millennium, the world has also experienced multiple paradigm shifts on climate change – from ignorance, to engagement, to collective head-scratching.

Today the relationship between humanity and nature is in conflict, too. The complexity of climate change seems to be outgrowing the international institutions, such as COP, the UNFCCC and the IPCC, who have dealt with it until now. The recognition of environmental degradation, climate change and climate-related security risks as some of the most pressing global concerns means this topic has climbed the political agenda. Indeed, the most eminent of international security arenas – the UN Security Council – has tabled climate change on multiple occasions since the start of the millennium.

In the world, so in the council – sooner or later, at least

Climate change was first discussed by the council in 2007, when it was tabled by the UK. Consensus on its importance was absent, however, and the other members’ interest went unpiqued.

In 2011, a Security Council Presidential Statement asked the UN Secretary General at the time, Ban-Ki Moon, to provide contextual information about climate change in his reporting to the Council. However, the response from the system was lukewarm.

Throughout the years, the US, France and the UK worked together to ensure climate change featured on the council’s agenda. Russia and China, in contrast, traditionally responded by suggesting the topic was the preserve of other UN organs such as UN Environment and the General Assembly. This stance was largely backed by the G77, the group of 135 least-developed states – and so, by extension, the majority of the UN’s 193 member states.

But 2017 saw a change to the status quo. Since then, the Security Council has seen a drastic uptick in the number of meetings on the topic of natural phenomena under differing formats and themes – from environmental law and climate-related security risks to natural disasters. The meetings and debates were organised by a diverse spectra of E10 members with varying – but ever-growing – participation, especially of member states from the G77.

Outside the council, the US announced its withdrawal from the Paris Agreement in 2017. Just days later, China offered to step in as an alternative climate partner to the European Union – while around the same time, China announced its loyalty to multilateralism to the audience at the Annual Meeting of the World Economic Forum in Davos – all of which supports the idea that a country’s motivations for tackling climate change can be intimately linked with its overall ambitions within the multilateral panorama.

In 2018, China adjusted its position in the Security Council and declared climate change to be relevant in a security context, in light of its wish to enhance multilateral cooperation and to take a comprehensive approach to security risks. Simultaneously, the US had withdrawn its engagement and had backed away from even paying lip service to climate change in all UN fora, following the change of administration in Washington. While the two P5 members rotated 180 degrees, Russia remained steady in its opposition to the inclusion of climate in the work of the Security Council. Meanwhile, outside the confines of the council, Russia joined the Paris Agreement in 2019.

The climate discussion is a microcosm of the geopolitical landscape, giving clues to multilateral appetites and diplomatic ambitions elsewhere. At an arsenal of defence and security conferences – such as within NATO in late 2019 – climate change, security and related risks have been considered at the highest level. This trend does not necessarily suggest a securitisation of climate, but perhaps a climatization of security.

In summary, climate change is undeniably receiving growing attention; from streets crammed with school strikers to senior leaders who voice varying degrees of concern. The majority of powers subscribe to the significance of climate-related change, despite a persistent polarisation around the means to mitigate its effects.

Climate change, on the other hand, won’t wait for consensus.

World Economic Forum articles may be republished in accordance with our Terms of Use.

The views expressed in this article are those of the author alone and not the World Economic Forum.

How different countries are handling isolation in light of omicron surge