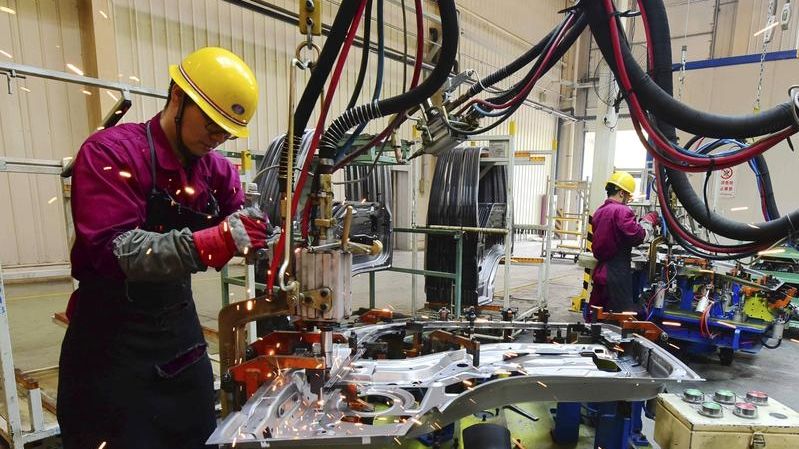 China’s factory output growth slowed significantly more than expected in October as weakness in global and domestic demand and the drawn-out Sino-US trade war weighed on broad segments of the world’s second-largest economy.

Industrial production rose 4.7 per cent year-on-year in October, data from the National Bureau of Statistics released on Thursday showed, below the median forecast of 5.4 per cent growth in a Reuters poll and slower than September’s 5.8 per cent.

Indicators showed other sectors also slowed significantly and missed forecasts with retail sales growth back near a 16-year trough and fixed asset investment growth the weakest on record.

The disappointing numbers show China off to a rough start in the final three months of 2019 and will bolster calls for Beijing to roll out fresh support after third-quarter growth slowed to its weakest in almost three decades, with factory production bruised by the trade war with Washington.

Asian stocks fell after the soft data, which reinforced concerns the trade war was hurting one of the world’s major drivers of economic growth.

“These data support our view that growth headwinds remain strong and the economy has yet to hit bottom,” said Nomura in a note, adding GDP growth was expected to slow to 5.8 per cent in the fourth quarter from 6.0 per cent in the third quarter.

China’s steel output fell to a seven-month low in October while the cement production contracted for the first time in over a year, compared with a year earlier.

The tariff war between China and the United States has hit global demand, disrupted supply chains and upended financial markets.

Other major trading powers have also felt the blow from the dispute with Japan’s economy grinding to a near standstill in the third quarter, posting its weakest growth in a year.

While some signs of recent progress in trade negotiations between the superpowers have cheered financial market, officials from both sides have so far avoided any firm commitments to end their dispute.

That uncertainty has weighed persistently on manufacturers and their order books in recent months and raised doubts about the prospects of any breakthrough.

Fixed asset investment, a key driver of economic growth, rose just 5.2 per cent from January to October, against expected growth of 5.4 per cent and the weakest pace since Reuters record began in 1996.

Infrastructure investment rose 4.2 per cent in the first 10 months, slowing from a 4.5 per cent gain in January-September.

In a bid to stop this trend, China’s State Council on Wednesday pledged to lower the minimum capital ratio requirement for some infrastructure investment projects.

TRS to intensify stir for coach factory in Kazipet