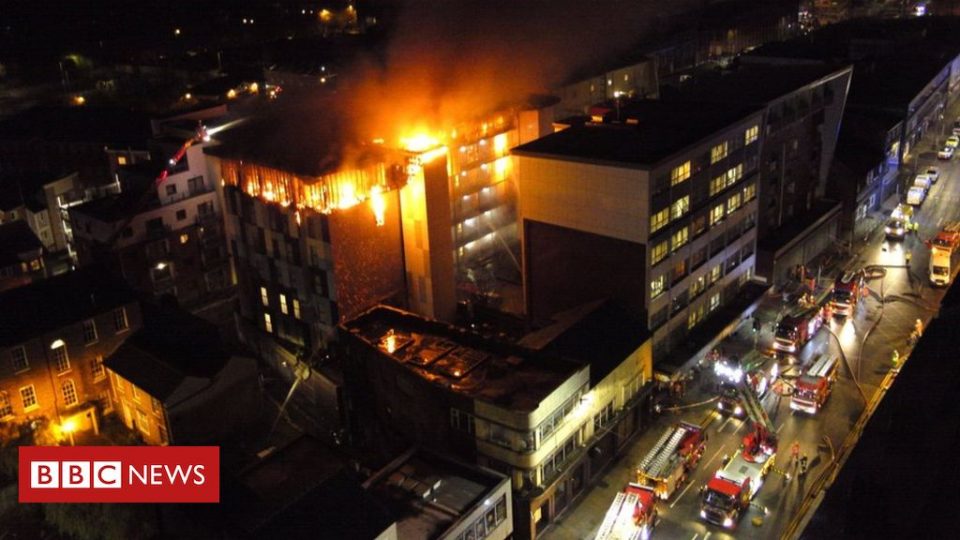 Students who were forced to flee a block of flats hit by a major blaze in Bolton are to be rehoused.

An investigation is under way after the fire ripped through The Cube on Friday, leaving dozens of students with “no personal possessions”.

More than £10,000 has been raised for the University of Bolton students through a crowdfunding appeal.

Two people were injured in the fire, amid confusion among residents because fire alarms go off “almost every day”.

Concerns have also been raised about the cladding on the outside of the building, although it is different to the material used at Grenfell Tower, where a blaze killed 72 people in London, in 2017.

The Cube, which is managed by private firm Valeo Urban Student Life, accommodates about 220 people.

Keira Rivetts, who lived in the six-storey building, told BBC Breakfast: “Most of us have [lost belongings], especially those who lived on the top and fifth floor – all their belongings have gone.”

“We’ve made sure all students have accommodation for next week,” he said.

Many international students were left without their passports after the blaze, but Prof Holmes said the government had “assured me they will fast-track those student passport and visa requirements”.

Ms Rivetts had just returned from work when she heard the alarms going off.

“[But] because it goes off so often, I just thought it’s another false alarm, it’s not a problem,” she said.

Friday’s blaze was tackled by up to 200 firefighters after it broke out at 20:30 GMT.

“The immediate evacuation clearly made an incredible difference… students ambassadors were going about banging on doors, getting everybody out,” David Greenhalgh, leader of Bolton Council, said.

“We have been assured that all alarms were working so that building was evacuated in the time that was needed.”

Greater Manchester mayor Andy Burnham said the fire service had learnt from the Grenfell fire and had also sent a team “to focus on the evacuation rather than fighting the fire”.

A spokeswoman for Greater Manchester Fire and Rescue Service (GMFRS) said: “It is not yet known when the students will be able to get back into their homes but work is ongoing to assess the safety of the building and access will be reviewed on Monday.”

The spokeswoman confirmed that The Cube was inspected along with other high-rise buildings in 2017 following the Grenfell tragedy.

She said a letter was sent to the building’s management “requiring the fire risk assessment to be updated to consider the risk of internal and external fire spread”.

“As part of this assessment, the building was operating an evacuation strategy,” a spokesman said.

The latter company, which is registered in Lincolnshire and has a board of directors based in the Republic of Ireland, is yet to comment.

The high-pressure laminate cladding used at The Cube is not the same as the now-banned aluminium composite material (ACM) at Grenfell, Salford mayor Paul Dennett said.

“We have a bit of a cladding lottery,” he added.

“The government has made resources available for ACM but this is high-pressure laminate, so we will be asking government for more funds to really deal with what is an industrial crisis.

“We need to do a full investigation of this building because it’s not just about the cladding, it’s about the actual structure of the cladding system and we need to investigate whether compartmentation has been breached and a whole host of different issues”.

Masuku denying he had knowledge of irregular PPE procurement is ‘self-serving’, SIU argues