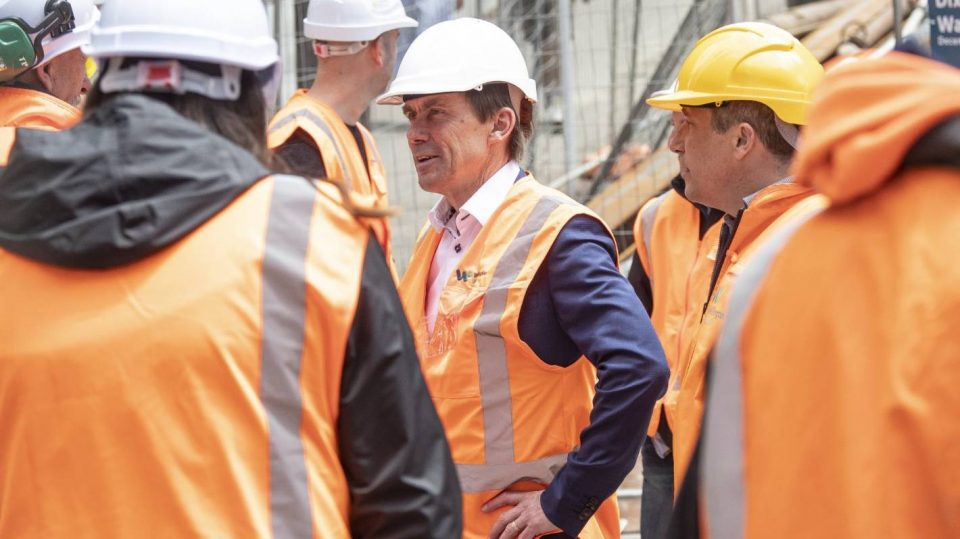 When Andy Foster stood on a couple of scratched-up wooden boxes on a windy afternoon in Shelly Bay to announce his mayoral run, Wellington’s pipes were the last thing on his mind.

In the many pages of his policy plan if elected the capital’s mayor, there was not a single mention of pipes.

But within weeks of being elected in October last year, the fragile state of pipes burst to the fore as sewage streamed into the Wellington’s harbour and beaches, roads were closed and the bill to ratepayers rose.

With this summer likely to bring more sewage leaks and water shortages, the capital, and many other towns and cities across New Zealand, will be reminded of the multi-billion dollar problem beneath their feet, a problem almost too expensive to fix.

For Wellington, it began in December last year when a corroded pipe collapsed on upper Willis St, sending 12-million litres of sewage into Wellington Harbour over three days – the equivalent of an Olympic swimming pool’s worth of sewage each day.

Less than a month later, a wrongly connected 125-year-old wastewater pipe on Cuba St sent millions of litres of waste into the harbour.

Within a matter of days, another crucial pipe broke, requiring sludge to be transported by convoy of trucks, and threading a pungent path through Wellington’s southern suburbs.

Officials initially downplayed the failures as a series of unlucky coincidences, but industry experts said it was a disaster waiting to happen.

Wellington city is by no means alone in its fight against collapsing pipes. Councils across the wider region and the country are facing a collective reckoning, as years of underfunding and neglect comes back to bite them.

Hutt City Council needs to dig up $1.3 billion to future-proof for Lower Hutt’s pipes, while Porirua City Council is facing a $1.8 billion bill for its pipe network over the next 30 years.

The estimates for Wellington City Council are even more eye-watering, as much as $5 billion in new spending to clear the backlog of existing issues and prepare for population growth.

Wellington’s pipes have an average age of 51 years, the oldest of any city in New Zealand, and over a third are in poor condition, according to analysis from Water New Zealand.

Pipes are deteriorating at a faster rate than they are being fixed or replaced, the same report found.

It’s like bailing out the Titanic with a thimble while steering directly in the path of a second iceberg.

Foster, who has sat on Wellington City Council since 1992, has seen first hand how easily pipes can be forgotten.

As a councillor, he said he had always been aware of high-profile new reservoir projects, but underground pipes were often passed over for funding.

“Out of sight, out of mind is definitely part of it,” Foster told Stuff. “You can see what a building looks like, likewise with a road. Pipes are always under the surface.”

Infometrics economist Bran Olsen said councils had dismissed pipe funding for so long that it may soon become overwhelming.

“If we don’t address it soon, costs will continue to rise and rise. It could quite possibly put unbearable pressure on councils going forwards,” he said. “This is water. It’s an absolute must, not just for councils but for human life. It’s not a nice-to-have.

The central government is currently pushing through series of water reforms

and will create a new national water regulator to oversee the water network, and reduce the number of authorities providing water nationwide from 68 to possibly as few as five.

But a new regulator will not magic up the billions needed to the fix the country’s ageing pipes.

Wellington is facing not one but three independent crises across each of the ‘Three Waters’.

Wellington goes through 350 litres of water per person each day, by far the highest domestic water use in New Zealand.

Estimates show more than two billion litres of water were lost before reaching the tap last year, about a fifth of all the water in the region’s reservoirs. Most of the loss is through leaks underground that are nearly impossible to uncover.

The Kaikoura Earthquake has created even more cracks in an already fragile system.

During winter, Wellington’s water supply is mostly drawn from the Hutt River and underground aquifers. However, in summer the river is normally too low to draw water from.

As a backup, water is drawn from two artificial supply lakes in Te Marua, Upper Hutt. But with population growth and new pipe leaks constantly emerging, those two lakes soon won’t be enough.

Without intervention, Wellington is looking at a financial ticking time bomb: a $250 million bill to construct a new water supply lake within the next five years.

Compared to Auckland, the capital’s water consumption is downright embarrassing. In the country’s largest city, people go through between 140 and 175 litres of water a day, less than half of what Wellingtonians use.

The major reason is that Auckland charges a metered rate for water while most of Wellington doesn’t. Metering not only encourages people to use less water, but help reduce leaks.

Kāpiti Coast District Council introduced water metering and charging in 2014 and the district saw a 26 per cent drop in overall water use.

However, the political backlash to the unpopular water pricing arguably cost then-mayor Ross Church his job.

Wellington Water has begun to install some ‘smart meters’ to track water at various early points in the network, but so far most of the councils in Wellington have been unwilling to take the political risk of pushing for water metering.

A third of Wellington’s wastewater pipes are graded as unreliable or highly unreliable, by far the worst of any major centre.

Hundreds of kilometres of pipes in Wellington were laid in the 1800s and are still relied on today.

Burst wastewater pipes can send raw sewage spilling out onto the street and seeping into the natural environment.

In emergencies, crews can sometimes manage to redirect the sewage through other pipes, but that usually ends up with thousands of tonnes being pushed out into the harbour.

The most important pipe in Wellington is called The Interceptor. Think of it as Wellington’s sewage highway.

Every wastewater pipe south of the suburb of Newlands eventually ends up at The Interceptor, before moving in a big brown wave towards the Moa Point treatment plant.

An inspection earlier this year revealed two critical sections of the pipe, totalling 260 metres in length, were suffering from serious corrosion, eating at least 6 centimetres into the solid concrete exterior.

If The Interceptor fails, the entire city’s sewage, 67 million litres per day, would be discharged directly into the sea off the South Coast.

That corrosion is also what led to the Willis/Dixon Street sewerage collapse, the most critical failure in the network this year.

An investigation into the Dixon street collapse found the council had been warned the 83-year-old pipe was suffering from serious corrosion after an inspection in 2004, but the report was lost and no repairs were made.

Stormwater: Sewage in the seas

For Eugene Doyle and other residents of Owhiro Bay, their beloved swimming spot has become a danger to human health. The rugged coastal bay is being fed by “a tsunami of human faeces” through its urban streams.

Residents of Titahi Bay in Porirua have faced the same hazards, afraid to let their children and pets play in the ocean.

Last summer, the Dive Tower at Wellington harbour was out of action almost all season, covered up in red tape and warning signs.

The reason, again, is outdated pipes. Wellington is one of the few places in New Zealand which built its stormwater and wastewater in a combined sewer system, an outdated 19th century approach which we are stuck with today.

The modern trend is to build completely separated systems for stormwater and wastewater. It is more expensive but avoids faeces leaking into precious waterways.

The problem is made worse by what’s known as cross-connections, that is when plumbers accidentally mix-up the pipes and connect the toilet to the stormwater system.

It normally happens during cheap renovation jobs, and it doesn’t take many cross-connections to ruin an entire waterway.

Wellington Water has discovered 30 cross-connections in the city this year, including a large cluster feeding into Owhiro Stream, but believe there are dozens or hundreds more yet to be located.

$8 billion – The cost of pipe upgrades needed across Wellington, Porirua, and Hutt City.

2 billion litres – the amount of drinking water lost to leaks each year.

350 litres a day – Wellington’s average water consumption per capita, more than double that of Auckland.

$250 million – the cost to build a new water supply lake.

67 million litres – the amount of sewage pumped out of Wellington homes each day.

2,150 km – the length of Wellington pipes estimated to be in poor condition.

TCB to sell potato at Tk 25 a kg as prices stay above fixed levels – bdnews24.com