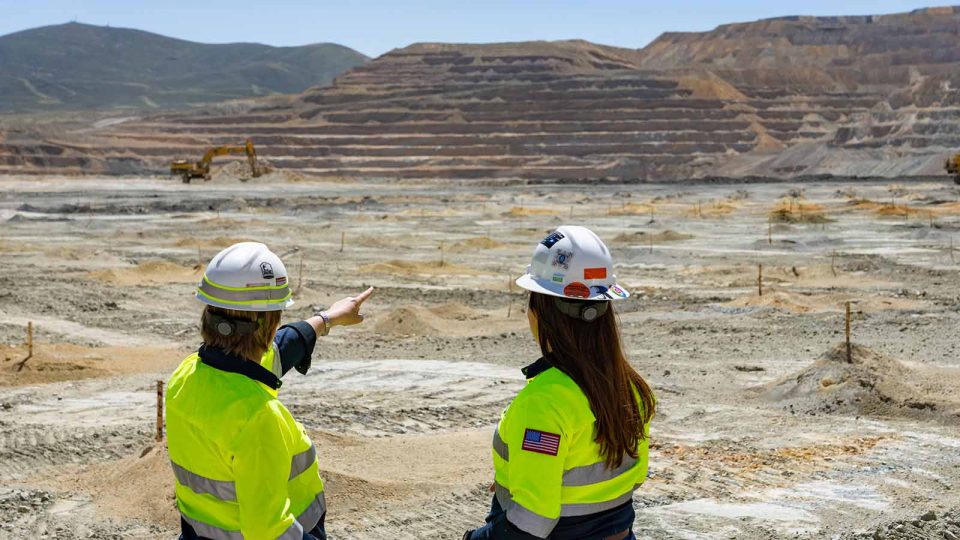 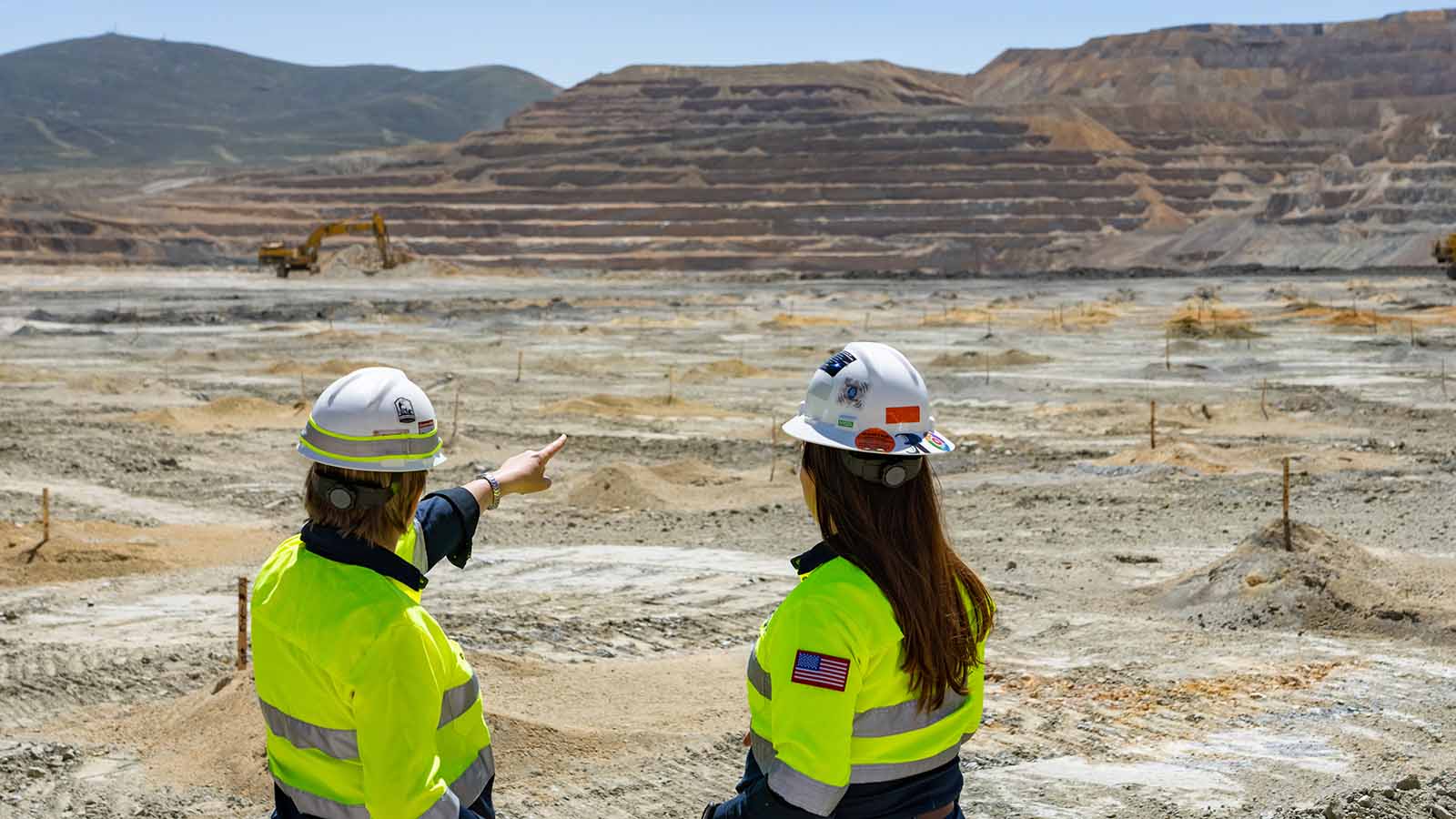 Speaking during a visit by a group of equity analysts and investors to see first-hand the development of the Goldrush underground project, the open pit operations and processing facilities at Cortez, and the Third Shaft project and core shack at Turquoise Ridge, Bristow said NGM had unlocked significant synergies by consolidating mines, teams, processing facilities and landholdings.

Since the formation of the joint venture with Newmont three years ago, NGM has produced 10 million ounces of gold (on a 100% basis) and distributed significant cashflows to the joint venture partners. Barrick operates NGM, the world’s largest gold mining complex, and owns 61.5% of the business with Newmont Corporation holding the rest.

Bristow said that greatly improved knowledge of the orebodies had supported robust 10-year plans and increased the pre-merger life of mine substantially, while new opportunities for further optimization as well as new discoveries and innovations continued to extract more value from the assets.

“NGM’s flagship development project is Goldrush, a world-class underground deposit at the Cortez complex, with a life of mine plan1 in excess of 20 years. It is expected to employ 500 people during construction and 570 during operation,” he said.

“NGM has also built strong relations across the full spectrum of the mines’ stakeholders, and its wide-ranging support for educational and other community development initiatives is securing its social license as a valuable partner with Nevada and its people.”

These initiatives include support for the College of Southern Nevada, its partnership with Discovery Education as well as its ongoing work with the University of Nevada, Reno and the Great Basin College to develop mining-focused curricula.

“Internally, NGM has launched a unique talent development program at their ‘training mines’ for underground and surface mining as well as process operations with the aim of providing the company with well-rounded, safety-focused employees and maintaining quality control through structured, comprehensive, competency-based training. In addition, leadership development programs have been rolled out with a focus on safety,” said Greg Walker, Executive Managing Director.

Refer to the Technical Report on the Cortez Complex, Lander and Eureka Counties, State of Nevada, USA, dated December 31, 2021, and filed on SEDAR at www.sedar.com and EDGAR at www.sec.gov on March 18, 2022.

Inferred mineral resources added since the formation of the NGM joint venture on July 1, 2019, based on NGM’s total inferred resources estimated as of December 31, 2021, including the 40% interest in South Arturo that NGM acquired in 2021 and that it did not already own, compared to the total pro forma inferred resources of NGM estimated as of December 31, 2018, including NGM’s then 60% interest in South Arturo and excluding Barrick’s 100% owned Fourmile project. See endnote 4 and endnote 5.

The pro forma reserves and resources figures of Nevada Gold Mines set out below were derived by adding the respective reserves and resources in respect of Nevada operations reported by Barrick in its 2018 Annual Information Form and Newmont in its press release dated February 21, 2019 reporting its 2018 Reserves and Resources and its annual report on Form 10-K for the fiscal year ended December 31, 2018 in respect of the relevant Nevada properties. The pro forma reserves and resources are provided for illustrative purposes only. Barrick and Newmont calculated such figures based on different standards and assumptions, and accordingly such figures may not be directly comparable and the pro forma reserves and resources may be subject to adjustments due to such differing standards and assumptions. In particular, Barrick mineral reserves and resources have been prepared according to Canadian Institute of Mining, Metallurgy and Petroleum 2014 Definition Standards for Mineral Resources and Mineral Reserves as incorporated by National Instrument 43-101 – Standards of Disclosure for Mineral Projects, which differ from the requirements of U.S. securities laws. Newmont’s reported reserves were prepared in compliance with Industry Guide 7 published by the SEC, however at that time, the SEC did not recognize the terms “resources” and “measured and indicated resources”. Newmont had determined that its reported “resources” would be substantively the same as those prepared using Guidelines established by the Society of Mining, Metallurgy and Exploration (SME) and that its reported measured and indicated resources (combined) were equivalent to “Mineralized Material” disclosed in its annual report on Form 10-K.

Below is additional reserve and resource data in respect of Nevada Gold Mines as of December 31, 2018:

Certain information contained or incorporated by reference in this press release, including any information as to Barrick’s and NGM’s strategy, projects, plans or future financial or operating performance, constitutes “forward-looking statements”. All statements, other than statements of historical fact, are forward-looking statements. The words “projects”, “prospects”, “secure”, “future”, “support”, “continue”, “expect”, “potential”, “will”, and similar expressions identify forward-looking statements. In particular, this press release contains forward-looking statements including, without limitation, with respect to: NGM’s plans for its next growth phase including the potential for new opportunities and discoveries and the future inclusion of Barrick’s Fourmile project in the joint venture; opportunities for further optimization of NGM’s mine plans; NGM’s ability to replace reserves depleted by production the anticipated mine life and benefits of the Goldrush project, including local employment during construction and operation; Barrick’s and NGM’s strategy, plans, targets and goals in respect of social issues, including local community relations and investments; and the anticipated safety benefits of NGM’s training and leadership development programs.

Forward-looking statements are necessarily based upon a number of estimates and assumptions including material estimates and assumptions related to the factors set forth below that, while considered reasonable by the Company as at the date of this press release in light of management’s experience and perception of current conditions and expected developments, are inherently subject to significant business, economic and competitive uncertainties and contingencies. Known and unknown factors could cause actual results to differ materially from those projected in the forward-looking statements and undue reliance should not be placed on such statements and information. Such factors include, but are not limited to: fluctuations in the spot and forward price of gold, copper or certain other commodities (such as silver, diesel fuel, natural gas and electricity); risks associated with Goldrush and projects in the early stages of evaluation and for which additional engineering and other analysis is required; risks related to the possibility that future exploration results will not be consistent with the Company’s expectations, that quantities or grades of reserves will be diminished, and that NGM’s resources may not be converted to reserves; risks associated with the fact that certain of the initiatives described in this press release are still in the early stages and may not materialize; changes in mineral production performance, exploitation and exploration successes; risks that exploration data may be incomplete and considerable additional work may be required to complete further evaluation, including but not limited to drilling, engineering and socioeconomic studies and investment; the speculative nature of mineral exploration and development; changes in national and local government legislation, taxation, controls or regulations and/or changes in the administration of laws, policies and practices; expropriation or nationalization of property and political or economic developments in the United States or other countries in which Barrick does or may carry on business in the future; risks relating to political instability in certain of the jurisdictions in which Barrick operates; timing of receipt of, or failure to comply with, necessary permits and approvals, including for the development of Goldrush; non-renewal of or failure to obtain key licenses by governmental authorities; failure to comply with environmental and health and safety laws and regulations; contests over title to properties, particularly title to undeveloped properties, or over access to water, power and other required infrastructure; the liability associated with risks and hazards in the mining industry, and the ability to maintain insurance to cover such losses; increased costs and physical risks, including extreme weather events and resource shortages, related to climate change; damage to the Company’s reputation due to the actual or perceived occurrence of any number of events, including negative publicity with respect to the Company’s handling of environmental matters or
dealings with community groups, whether true or not; risks related to operations near communities that may regard Barrick’s operations as being detrimental to them; litigation and legal and administrative proceedings; operating or technical difficulties in connection with mining or development activities, including geotechnical challenges, tailings dam and storage facilities failures, and disruptions in the maintenance or provision of required infrastructure and information technology systems; increased costs, delays, suspensions and technical challenges associated with the construction of capital projects; risks associated with working with partners in jointly controlled assets; risks related to disruption of supply routes which may cause delays in construction and mining activities; risk of loss due to acts of war, terrorism, sabotage and civil disturbances; risks associated with Barrick’s infrastructure, information technology systems and the implementation of Barrick’s technological initiatives; global inflationary pressures driven by supply chain disruptions caused by the ongoing Covid-19 pandemic and global energy cost increases following the invasion of Ukraine by Russia; risks related to the demands placed on the Company’s management, the ability of management to implement its business strategy and enhanced political risk in certain jurisdictions; uncertainty whether some or all of Barrick’s targeted investments and projects will meet the Company’s capital allocation objectives and internal hurdle rate; business opportunities that may be presented to, or pursued by, the Company; our ability to successfully integrate acquisitions or complete divestitures; risks related to competition in the mining industry; employee relations including loss of key employees; availability and increased costs associated with mining inputs and labor; and risks associated with diseases, epidemics and pandemics, including the effects and potential effects of the global Covid-19 pandemic. Barrick also cautions that its 2022 guidance may be impacted by the unprecedented business and social disruption caused by the spread of Covid-19. In addition, there are risks and hazards associated with the business of mineral exploration, development and mining, including environmental hazards, industrial accidents, unusual or unexpected formations, pressures, cave-ins, flooding and gold bullion, copper cathode or gold or copper concentrate losses (and the risk of inadequate insurance, or inability to obtain insurance, to cover these risks).

We disclaim any intention or obligation to update or revise any forward-looking statements whether as a result of new information, future events or otherwise, except as required by applicable law.

Call for proposals – Procurement IT equipment and software