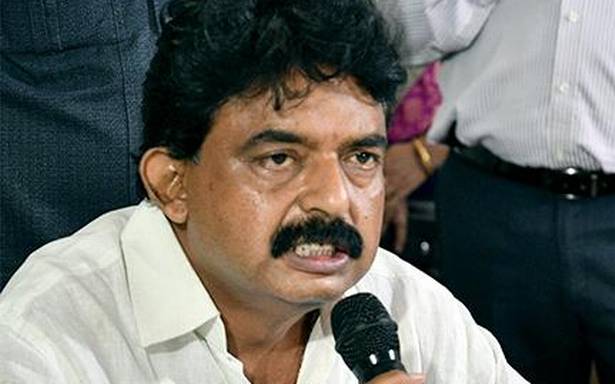 Transport Minister Perni Nani on Monday appealed to farmers to avoid selling paddy directly to rice millers, and join hands with the government to scrap the middlemen system in paddy procurement.

“A total of 264 PPCs have been opened across Krishna district, putting a check on direct involvement of rice millers in procuring paddy from the farmers to ensure implementation of the Minimum Support Price (MSP),” said Mr. Nani.

“In the case of farmers cultivating paddy in the assigned land, the Village Revenue Officer will issue a certificate to be produced at the PPC to allow the paddy purchase procedure without the need of producing the Passbook”, added Mr. Nani.

No MSP for higher moisture

Elaborating on the procurement rates, he said: “The MSP for Grade A quality is ₹ 1,835 per quintal and ₹ 1,810 for Common Grade. The government is prepared to purchase the entire paddy that is brought to the PPCs.” In Krishna district, paddy was sown in above 1.25 lakh hectares in kharif 2019-20.

Joint Collector K. Madhavilatha said the existing method of paddy procurement was aimed at excluding rice millers from the purchasing cycle. Henceforth, rice millers will have to procure only from the PPCs instead of directly from the farmers and make a killing.

Further, Ms. Madhavilath has asked the farmers to ensure registration of their crop before bringing it to the PPCs.

How to Create a Culture of Sustainability in the Workplace