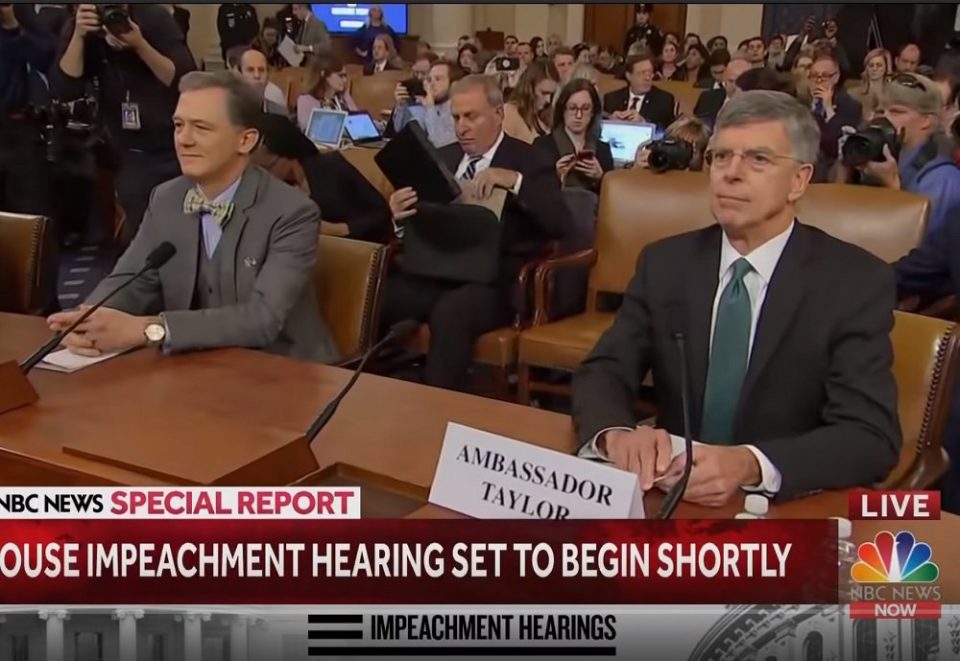 Does anyone really believe the conclusion of Democrats’ impeachment “inquiry” isn’t predetermined? President Trump was guilty the moment he won the 2016 election — guilty of denying Democrats the massive spoils of federal power. Every moment since has just been searching for a pretext to remove him from office without an actual election. First Spygate, now the “impeachment inquiry.”

So it’s no surprise that just 13 million viewers tuned in for the first day of televised impeachment hearings last Wednesday, many fewer than for the Brett Kavanaugh and Christine Blasey Ford hearings last fall (20 million viewers) and for James Comey’s Russiagate testimony (19.5 million), according to early Nielsen ratings reported by Axios.

Since an estimated 304.5 million Americans have a television set at home, that means about 4.3 percent of them watched. For another comparison, a record 137.5 million Americans voted in 2016 and many millions more Americans are watching NFL games this fall (game viewership ranges between 10 and 23 million, with most at 13 million and up).

CNN legal analyst Jim Baker shook his finger at these naughty Americans on Twitter, insisting it’s our solemn obligation to watch Democrat-rigged impeachment theater as if we live in “1984” with Big Brother’s televisions always drilling into us what to think.

I’m sorry if some people think these hearings are boring. As American citizens we have a solemn obligation to pay attention to this process no matter what side you’re on. You’re not being asked to storm the beaches at Normandy after all. Suck it up and watch.

On Friday, New York Times opinion writer Jennifer Weiner unleashed her inner schoolmarm. Apparently “I’m Sorry, Is Impeachment Not Entertaining Enough for You?” is the only messaging Democrats have left after actual evidence failed to surface for their latest set of wild anti-Trump claims.

Please excuse me while I recover from laughing at her claim that “It seems to some members of the media, impeachment is no longer about right and wrong, legal versus illegal. It’s about watchable versus unwatchable, enthralling and fun versus dusty and dry.” For this to be remotely plausible would require the American political media to give a thimble for facts versus innuendo.

Remember the “pee dossier”? What about the serial gang rapist who actually wasn’t nominated to the U.S. Supreme Court? Yeah, live those down, maybe even apologize for them, and then tell me about how your team cares about truth and justice.

Weiner’s solution to a chorus of “boring” after the hearings is, I kid you not: “The next time we see a partisan or a politician or, worse, a reporter complain that the hearings are boring, we push back. We point out that our political process is one thing and professional wrestling is another, and shame on anyone who faults the first for not resembling the second.”

So the people who wear vagina hats on their heads and brandish ridiculous red robes to demand that taxpayers pay to kill children are telling us that politics needs to look less trivial.

It’s also really rich to hear the team of Hollywood and BuzzFeed and deliberately addictive algorithms suddenly pretend to care about the citizenry’s attention spans and carefully cultivated appetites for gossip and slander over sober, reasoned reflection honed by years of careful study and experience. These are the people who want actual children to vote (only after they’re born, I guess) and whose response to every opposition argument is “You mother-effing, grandma-murdering RAAAAACISSST!”

Back in the real world, it’s not clear why logical, thoughtful Americans would tune in to these hearings. Not only are Democrats puppet-mastering the process to the point of banning Republicans from calling witnesses, viewing evidence, or asking questions, but 62 percent of voters say there’s no possibility of changing their views on impeachment, with another 19 percent saying there’s little possibility they’ll change their minds. This doesn’t sound like an open-minded process of impartial and deliberate reflection to me. It sounds like what it is: A witch hunt.

How many times can Adam Schiff say “the Gentlewoman is NOT recognized”? He clearly has NO interest in letting Republicans have any say in the impeachment hearings. Watch him interrupt us multiple times and refuse to yield for our parliamentary questions👇👇 pic.twitter.com/DnudgOe5Ed

Before last week’s hearings, Democrats told media outlets they expected the show trials to shift public opinion in their direction. But voters’ low interest and predetermined views has instead confirmed their fears that even dramatic wall-to-wall TV coverage won’t make impeachment a win for them. Perhaps they’ve hit a ceiling on manufactured Trump hatred.

“In a private meeting this week, House Speaker Nancy Pelosi and her top lieutenants were skeptical about the prospects of a dramatic shift in opinion even as public impeachment hearings began this week,” reported CNN Thursday. Later, the article releases a key nugget:

How impeachment plays in key districts has been an issue that Democrats have discussed repeatedly behind closed doors. At a meeting in late October, DCCC officials discussed focus group research that showed that voters wanted the inquiry to be a fact-finding mission — not a foregone conclusion, according to a source in the room.

The facts, however, show that Democrats have been primed for impeachment since Trump was elected. House Judiciary Chairman Jerry Nadler, D-N.Y., fed CNN the party line about impeachment for its Thursday story: “I’ll keep my mind open at the moment.” This is the same Jerry Nadler caught on the phone after the 2018 midterms plotting to impeach Trump over the Russian collusion hoax. When no evidence surfaced for that pretext for impeachment, Democrats found another in Ukraine.

It’s a risky strategy for them, to say the least. Looking at least as bad as Trump in the Ukraine narrative is Democratic presidential frontrunner Joe Biden, who has to defend not only putting taxpayer funds on the table for international policy negotiation — a similar charge as the claimed one against Trump — but also his son’s personal enrichment.

If there ever is a real impeachment vote, Democrats have no hope of removing the president without a veto-proof majority. Even in that highly unlikely case, all they would accomplish is putting Mike Pence into the presidency.

What’s more, Republicans aren’t peeling off on Ukraine like they did on Russiagate; Democrats are.

Democrats appear to have jumped the shark here into taking a huge, avoidable political risk. All that’s really left to the imagination is how they’re ultimately going to retcon their failures.

MSC vs Maersk: One line to rule them all