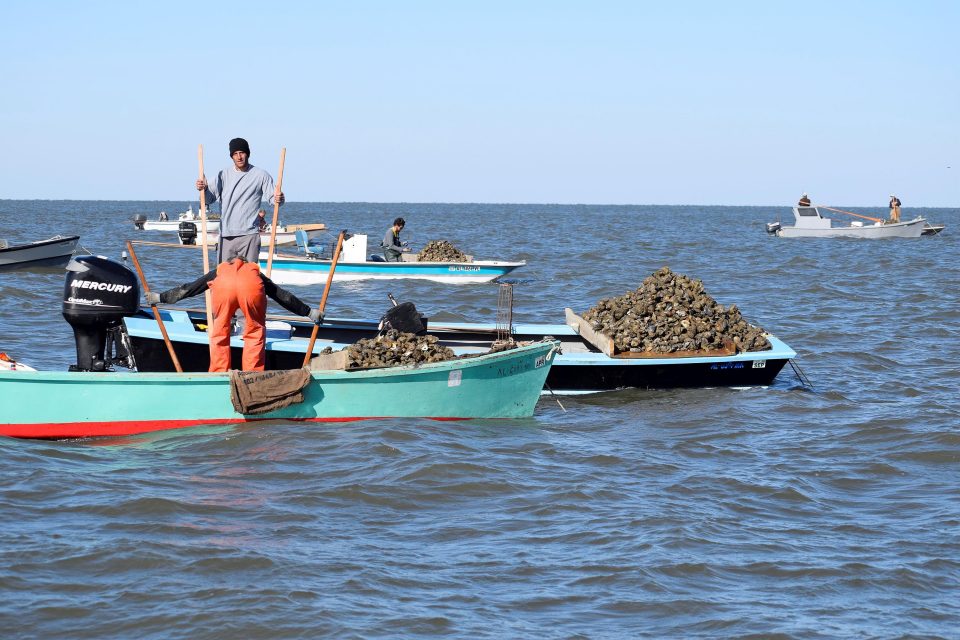 By DAVID RAINER, Alabama Department of Conservation and Natural Resources

Those who love to dine on Alabama’s succulent oysters are in luck. The state’s oyster season opened on October 3, and the oyster catchers are busy plucking those delicious bivalves from the reefs in coastal waters.

Scott Bannon, Alabama Department of Conservation and Natural Resources’ (ADCNR) Director of the Marine Resources Division (MRD), said both the number of catchers and sacks of oysters harvested per day are up from last season.

“To my knowledge, we had a record number of catchers for an opening day at 243,” Bannon said. “The max we had last year on any given day was 211. Last year, we averaged 180 catchers a day. This year, we’re averaging 220.

An average sack of oysters weighs about 85 pounds. Oyster prices are ranging from 75 to 90 centers per pound currently. Commercial catchers are limited to six sacks per day.

“The average is 5.7 sacks per day, so most catchers are getting their limit almost every day,” Bannon said. “Our preseason surveys gave us an indication that this year would be similar to last year. Last year we harvested just under 50,000 sacks total. It’s hard to predict how long the season will run and how many sacks we will allow for harvest. We’ll be doing weekly surveys on the reefs, looking at the material coming up to the decks of the boats. We’re looking at the cultch material, small oysters and the spat, which are the larval oysters.”

A harvestable oyster is 3 inches across its widest point. MRD Conservation Enforcement Officers use a 3-inch ring to measure the oysters. If the oyster passes through the ring, it is considered sublegal or undersized. If the oyster touches the sides of the 3-inch ring, it is considered legal to harvest. Catchers are allowed to harvest oysters from 7 a.m. to 2 p.m. during the open season.

“We look at the legal-size oysters in the grid system,” Bannon said. “This is our third year with the grid system, which we use for reporting. We use the harvest per grid and look at the harvest from last year to tie all this information together to continue to maintain and grow the resource, but also provide an opportunity for catchers to make a living and provide product for the market.”

Last year’s season lasted 79 days, but the MRD does not use a quota to determine the closing date.

“We base it on how we survey the reefs with actual catchers out there working,” Bannon said. “With the grid system, the catchers are able to move into different areas that they haven’t worked before. Last year, they harvested just under 10,000 sacks off the east side in Mobile Bay. Our surveys, which are small, didn’t show we had that substantial a population in that area, but when the catchers got out there and started working, they found the areas where there were harvestable oysters, which is what we had hoped they would do. Hopefully, they will be able to move over there this year and possibly expand on it because they didn’t get over there until late in the season last year.

“I anticipate a season very similar to last year’s. The oyster catchers are providing very positive feedback about what they’re seeing and how they feel about the condition of the reefs. Those are good signs, but we’re still in a rebuilding phase. We don’t want to overharvest, but we want to maximize the opportunities.”

MRD is working on new technology to survey the reefs. The surveys consist of taking a one-square-meter grid on the reef and counting oysters and material inside the grid.

“We’re working on developing a mechanical arm to do the surveys,” Bannon said. “We will be able to do the surveys much quicker, which means we can survey more areas and identify areas that need cultch planting and areas with oysters that we will encourage the catchers to harvest. With the grid system, now we can tell the catchers the grids that have oysters. By next season, we should have that in place.

“We feel comfortable with the cultch material we have in place, but we will seek funding for more cultch planting to help expand the areas that have been productive the past couple of years.”