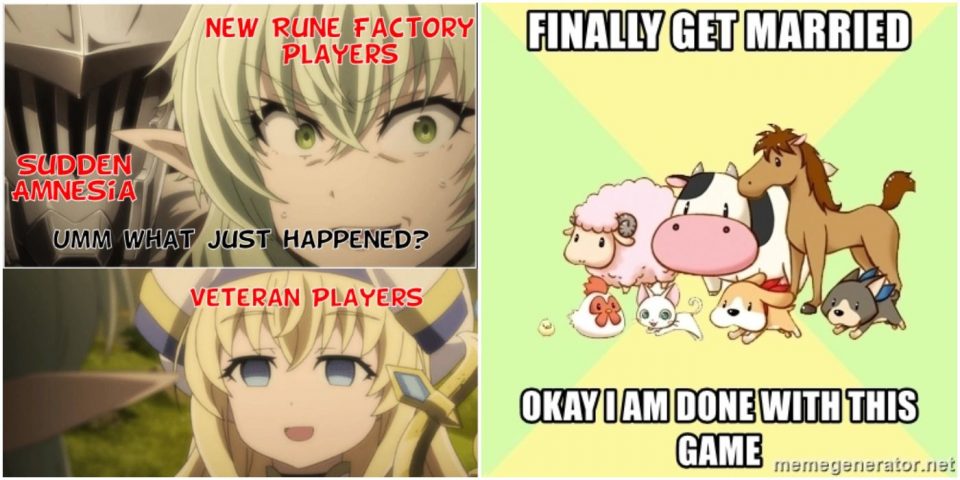 Harvest Moon and Rune Factory fans have crafted some hilarious memes. Here are some only veterans will get.

Rune Factory and its sister series Story of Seasons (formerly known as Harvest Moon in the west) have captivated gamers for years. As with many games, though, even the relaxing gameplay aspects of both titles can become a little bit annoying, especially to veteran players. While Rune Factory is focused on combat, it has many of the core values from Story of Seasons, and over the years the two have borrowed systems from each other.

RELATED: Harvest Moon: The 5 Best & 5 Worst Games In The Franchise (According To Metacritic)

While Story of Seasons players probably won’t ever find themselves slaying a rogue Wooly, the two games still feature many of the same frustrations.

It seems like in the JRPG world the amnesia trope runs rampant, and the Rune Factory series is no stranger to this curse. While most new players are left questioning the series reliance on amnesia, the veteran players are already used to the subject, and it’s become as normal as raising monsters.

While Rune Factory 5 hasn’t come out yet, some veterans are already bracing for a forgetful main character.

One of the best ways to make money in the winter months is by heading into the mines in Story of Seasons games. Most mines will have multiple floors and players will have to till the ground with their hoe to try and find a ladder that will allow them to descend to the lower floors for better loot.

One of the best feelings in the game is when you find the ladder, especially if you have only tilled one spot of soil.

8 Chores Are The Worst?

This meme can go for both games as they are all about doing the same tasks day after day. Whether the player is growing a garden, taking care of monsters, or trying to make friends with the locals, the gameplay of both titles is essentially a series of daily chores that must be done in order to make money and get married.

Many players find themselves spending hours taking care of their virtual gardens, while trying to avoid real-life to-do lists.

It’s no big secret that one of the final goals in a Story of Seasons game is to get married and maybe have a child if the feature is available. Players spend most of their time saving up money to upgrade a house and harvesting ingredients to make their partner’s favorite dish so that they can one day propose.

After the wedding happens though, many players are done with the game as there usually isn’t much left to do.

There aren’t characters much more hated in these two series than the rival characters. These characters will swoop into a romance the bachelors and bachelorettes if a player doesn’t marry them within a set amount of time. These rivals even have cutscene events the players are forced to watch.

While the game usually gives the player years before the characters begin to marry, the rival cutscenes tend to boil the blood of fans.

5 The Good Ones Are Always Taken

It has happened to just about anyone who has played a game with marriage, players find a player they relate to and as fate would have it, they aren’t datable. This can be especially rough-in Rune Factory since everyone has their own backstory, forcing players to get attached to them.

Some players even mistakenly waste seasons giving the NPC gifts only to learn that they are just friends in the end.

4 The Most Heartbreaking Moment

As a child, players didn’t really think of the fact that animals can get sick and will need medical care. Because of this many children who play Story of Seasons games don’t tend to stock up on medicine. It also just so happens that animals only seem to get sick when the animal store is closed.

There is no worse feeling than trying to get medicine for your chicken only to learn that the store is closed for the day.

It’s no secret that the blacksmith is a needed feature in Rune Factory titles. He can help you upgrade your gear and is the only way to really progress through the tougher areas of the game. The only problem is that it can feel like an eternity when a player is waiting for the shop to open.

Many players end up losing their minds while waiting for the seconds to tick by so that they can enter the store.

There is no better feeling than loading up that old Story of Seasons game, just to perfectly remember how to make recipes. It is a symbol of pride in the community to be able to jump right back into the daily grind of farm life, without having to pull up a guide online to do so.

It’s even better if the player remembers how to make or do a complicated action in the game.

1 Are They Getting Cuter?

Longtime fans of the Rune Factory games have started to notice a strange trend as the series has progressed. It is becoming more and more apparent that each game is getting a cuter art style. What was once a fantasy-like fantasy RPG, is getting cuter and cuter as time goes on.

While most players are ok with this style change, some wish that the series would stick with more realistic styles.

NEXT: Rune Factory Vs. Story of Seasons: Which One is Better?


Next
The Witcher 3: All of Geralt’s Friendships, Ranked

Jess has been writing for clients all around the world for years. From companies in Japan to being featured on The Kim Komando Show, Jess has prided herself in expressing her love for gaming. Her favorite console is the Nintendo 64 and she revels in replaying through Paper Mario and Megaman Legends. When not fighting Reaverbots she can be found gushing over the newest JRPGs or watching seasonal anime with her furless cat Noko.

Physician predicts ‘unprecedented surge’ in US Covid-19 cases after Thanksgiving

What we can learn from COVID-19 supply chain issues